Writer and blogger Mark Charlton visits the Refuge de Platé in the Haute Savoie on a night of fires and celebration.

In over 30 years of visiting mountain refuges I’ve seldom had a problem with language. My limited French, a few well-rehearsed phrases and the relative ubiquity of spoken English are usually enough to secure a booking or take instructions on the route. It was therefore with some surprise that the guardian of the Refuge de Platé seemed to be asking me to bring some wood.

‘We’re having a bonfire,’ he explained, ‘for the Feast of St Jean.’ The celebration coincides with the summer solstice, with refuges across the region signalling their presence in a ribbon of lights – for many it marks the beginning of their season. But evidently this year’s woodpile was looking a bit thin. When I asked if the climb from the valley was steep, the guardian replied: ‘Don’t worry, just a few logs will be fine!’

The Refuge de Platé is situated to the north of Passy in the Haute Savoie, and although technically part of the popular Tour de Fiz trail, it requires a diversion from the shortest routes. Originally a private venture, the refuge was bought by the French Alpine Club in 1924 and is run by a small team of guardians, serving food to passing walkers and offering overnight accommodation for up to 35. A glamping tent adds to this number, and backpackers are welcome to pitch up.

The Cicerone guidebook Walking in the Haute Savoie: South details a two-day trail following the valley to the east. It’s a simple extension to cross the Col de Portette (be careful of snow in the early season) for a day’s exploration of the extraordinary desert de Platé. Covering nearly 20km2, the plateau is one of Europe’s largest limestone pavements, in equal parts moonscape and alpine treasure trove.

The slabs of clints and grykes give rise to an abundance of flowers, fossils and insect life – with uninterrupted views of Mont Blanc and the Chamonix valley hidden from sight, this feels a deeply remote and special place.

Confidence in the trail

My route started at Plaine Joux above Passy. There are numerous parking options here, but the ski station is good for longer stays as there are usually camper vans adding some overnight security. From the station, I retraced the road to Guibriant and took the marked path to Charbonnière, from where it’s possible to continue to the Refuge de Varan, (joining Walk 1 in Cicerone’s Haute Savoie: South). A pile of logs near the junction reminded me of the guardian’s request, and so, just as the path steepened, I added two to my pack and knuckled down to the climb.

Like many alpine footpaths, the way ahead is less about route finding and more to do with confidence in the trail. The track picks an improbable way through imposing pinnacles, often heading for a cleft or cliff, only to skirt to the side. Towards the top the trail becomes more friable, with loose scree as you enter the Chimney de Platé to the east of les Miots. There are no security chains here, and if it were not for the couple of metal bridges, you could almost be climbing a welsh gulley.

On exiting the Chimney, you arrive at the edge of the plateau from where it is only a short walk to the refuge. The guardians, Sylvian and Federica, greet me, saying I’ve arrived earlier than they expected. Chest swelling a little from the compliment I unpack the wood from my sac as if it were nothing to carry two large logs from the valley to 6500ft. Controlling my breathing as best I can, I order an omelette and a large homemade lemonade.

Food plays a big part in most refuges, but here the kitchen seems especially busy. The team are preparing for tonight’s meal and they are expecting a full house. Gas and provisions are brought in by helicopter but otherwise the refuge is self-sufficient, using solar power, composting toilets and limiting water from the sinks to specified times. All the bread is home baked, as is the apricot cake that they bring me to follow my omelette. The evening meal is equally delicious – home-made soup, a hearty lasagne, savoie cheese and, of course, more cake.

The fire is set

At around 9pm, the sky is pink, and folk begin to gather outside. Wood is taken in a barrow to the edge of the plateau; more climbers arrive from the valley and some trail runners pass through, carrying flares and heading to the ridge. I can hear French, Italian, German, even some Dutch and a little English – there are children with parents, and parents with their parents – the atmosphere builds as the fire is set, and an elderly lady plays her harmonica.

The bonfire is lit at 10pm; first some kindling, then larger sticks and a few logs. Quickly, the flames build along with the warmth. We gather round as Sylvian lights a flare, moving to the edge of the cliff – its red flame trailing smoke across the view of Mont Blanc.

As he holds it aloft, I imagine him as a warrior, signalling to comrades – we are here, he is saying…

Then, one by one, more lights appear – I count seven, then nine and a fire on les miots; moments later the trail runners light their flares on the ridge. Our bonfire needs no more tending, so we stand quietly – in couples and groups – looking at the stars and the flickering lights across the valleys. The lady with the harmonica plays a mournful rendition of ‘La Forza Del Destino’ – her grandchildren playing on the rocks, oblivious to its significance.

And as the torches go out, we gather again round the fire, flames spitting embers into the dark. Federica plays her guitar and sings to us in Italian. There’s a flask of tisane, some vin chaud, more logs on the fire. The husband of the harmonica player tells me, in broken English, that he first came to the refuge as a boy – they used to light torches then, too. The Feast of St Jean is a rare festival, he says, for it celebrates a birth not a death.

I ponder this as we walk back to the refuge, our head torches picking a way through the limestone slabs. In the morning I will return to the valley, un-showered and stiff from the climb – yet refreshed and ready for a new summer in the mountains. As I reach my dormitory, I notice a pile of wood by the steps and have the suspicion that my logs are in there! Oh well, I smile, the descent will pass more quickly without them, if not the memories… 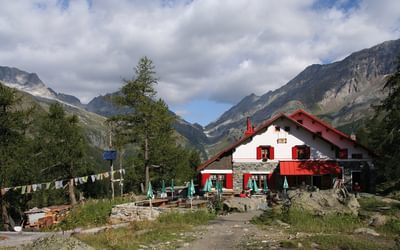 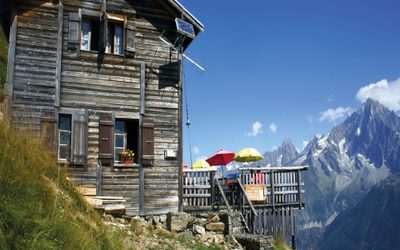 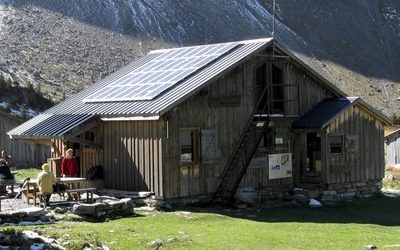 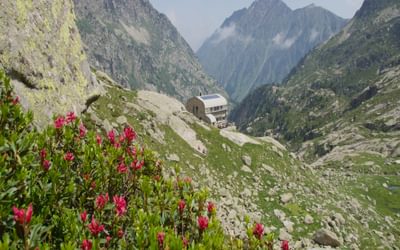 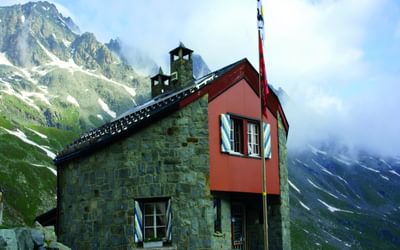 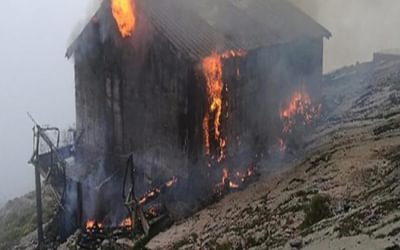