Ronald Turnbull remembers encounters with quagmires, morasses, bogs, fens, flows, sloughs and other soggy bits of Britain. He is doing his best to help you avoid yearning for the hills and perhaps make you slightly happier about being stuck at home with dry feet…

"A real bog," says J McBain (The Merrick and the Neighbouring Hills 1928) "is a circumscribed expanse of the earth's surface that has been unable to make up its mind whether to become land or water." And he goes on to describe one: "…an expanse of mud, though not an unbroken expanse, but rather a network of ditches with watery surface and sub-stratum of mud of unknown depth, running in all directions, and communicating at all angles, with narrow banks between, on which a man might find precarious footing. These channels are comparable to nothing but stagnant open sewers filled with slush that smells with the smell of the dead and decaying debris of vegetable and insect life; and so far as uncleanness is concerned, one might as well get immersed in a cesspool as stumble into one of these slimy puddles."

A couple of times this week I've been asked to write about coping with lockdown. But as an outdoor writer living in rural Dumfriesshire, I'm in the small minority who are neither overworked and in danger nor unemployed, impoverished and bored. I'm even busier than usual, due to not having to waste any writing time by going outdoors.

So the Cicerone folk said, let's have something inspiring and exciting, to – er – make the poor readers even more upset than they are already about not going out into the hills just now. To avoid that uncomfortable yearning sensation, here's a piece about notable bogs and swamps. With any luck it could make you slightly happier about being stuck at home with dry feet…

"They had been twelve days crossing the Neck, rumbling down a crooked causeway through an endless black gob, and she had hated every moment of it. The air had been damp and clammy, the causeway so narrow they could not even make proper camp at night, they had to stop right on the Kingsroad. Dense thickets of half-drowned trees pressed close around them, branches dripping with curtains of pale fungus. Huge flowers bloomed in the mud and floated on pools of stagnant water, but if you were stupid enough to leave the causeway to pluck them, there were quicksands waiting to suck you down, and snakes watching from the trees, and lizard-lions floating half submerged in the water, like black logs with eyes and teeth."

Crossing such places will cause mental confusion, as well as very mucky knees.

You might not have visited the Silver Flow, in the Galloway Hills (first quote). And you almost certainly haven't braved the dreadful, but fictitious, swamps of the Neck in central Westeros, from 'Game of Thrones' (second quote). One that almost everyone's been to at some point, though, is the metaphorical marsh found in John Bunyan's 'Pilgrim's Progress'. Under lockdown in Bedford gaol in 1678, John Bunyan spend his time dreaming of the greatest long-distance route of them all, from ignorance right through to the Afterlife.

Before prison Bunyan spent three years in the army during the English Civil War, then lived as a travelling tinker and preacher. He knew about long, rough roads under a heavy backpack. And his pilgrim, Christian – "a man clothed in rags standing in a certain place, with his face from his own house, a book in his hand, and a great burden upon his back..." – his guidebook is the Bible but otherwise he could be any long-distance walker setting out along the Coast to Coast Path. Only a couple of miles into his trip, he finds himself caught in a sticky place:

Now I saw in my Dream, that they drew near to a very miry Slough, that was in the midst of the plain; and they, being heedless, did both fall suddenly into the bog. The name of the slough was Despond. Here therefore they wallowed for a time, being grievously bedaubed with the dirt; and Christian, because of the Burden that was on his back, began to sink in the mire.

A boggy bit right at the beginning can be seriously discouraging. Having crossed Knockquhassen Moor on Day One of the Southern Upland Way I know just what poor Pilgrim felt like.

Going to the Bog

It's been a Scottish tradition ever since the MacDonalds took the stolen cows home through Rannoch Moor, and the Armstrongs of the Debateable Land were chased by their Dumfriesshire neighbours into the Tarras Moss above Langholm. Only the Armstrongs knew the paths between the swampy bits where, they say, two spears tied together couldn't find the bottom.

A day's walk up the Border, the Queen's Mire is on the lonely Roxburghshire 2000-footer Cauldcleuch Head (NY474997). It's named for Mary Queen of Scots, who nearly came to grief here in 1566 on her pony ride between Galashiels and Hermitage Castle – she was going there to visit the bedside of the raunchy but wounded Earl of Bothwell. In Sir Walter Scott's day, around 1800, you could still see the bones sticking up of the horses perished in the peat.

Today, Tarras Moss and the Queen's Mire have been drained for sheep pasture. They're only grass and rushes, just damp enough to challenge the gaiters and the Gore-tex lining. Nowadays, people in the UK are hardly ever sucked down into swamps. In many crossings of Scotland, I've never felt in peril of my life.

But I did, once, in the Lake District.

We were coming down the Wyth Burn on the way from Scafell Pike to Helvellyn on the shortest day of the year. Five o' clock is teatime in Keswick, but at Wyth Burn in midwinter it's full darkness, and a cold rain falling, and nothing to see but a few feet of pale grass stalks in the beam of the torch. A couple of miles down the valley I felt the ground wobbling under my foot, in a way that wasn't just the weariness of a 12 hour day on the fells. I was on quaking mire: a black pool of liquefied peat, below a mat of sphagnum moss tied together with sedge, dry enough on its top surface to grow a deceptive meadow of grasses, sundew and asphodel.

I slowed down over several steps, like a car on black ice; lowered myself onto knees and elbows; then crawled backwards the way I'd come until I found stones under my hand. On the map afterwards, I noticed that this place is named simply as 'The Bog'.

Rannoch Moor could be Scotland's biggest bog. Its many lochans don't have edges, they just ramble out into the surroundings as black creeks and ponds of soggy moss.

Crossing Rannoch is exactly like a Japanese logic puzzle called Nurikabe, except with wet feet, and no reset button.

Nurikabe (or 'Islands in the Stream') has somewhat confusing rules:

The cells of the box are coloured with white and black islands, or Nurikabe streams. The islands should be clearly separated but allowed to make contact with the corners. Each island should contain a square of the number, and that number should represent the square of the island. The flow must be single Nurikabe continuous. All dark triangles are attached to the sides (not just the corners). In addition, the flow cannot contain a 2 square x 2 square pool.

The Nurikabe puzzle was invented in 1998. But the Nurikabe himself has been rambling about on Rannoch for a lot longer than that. Nurikabe's life purpose is to frustrate foot travellers, taking the form of an unclimbable, invisible wall which extends for ever in either direction. According to yokai.com, the online database of Japanese ghosts and monsters, this invisible wall materialises "right before your eyes". He looks like a cross between a puppy and a large sack of cement. At least, he would do if he weren't invisible. The 'wall' itself is formed of his supernaturally enlarged scrotum. Accordingly, a poke in the right place with a sharp stick may be enough to dispel the Nurikabe.

Hopefully then, I keep on poking my poles into the black peat of Rannoch. And as the shadows spread across the moor, I shake the peat off my gaiters on the 547m hillock of Leathad Mor, in the middle of the moor.

I spend half an hour looking for the prime peatbank: out of the wind, dry at its base, and with a clear sightline back across the moor. The sky is striped with cloud, but the low sun comes across the lochans, to light up the hills of the moor's edge in rusty brown. Then it goes down into the Blackmount in a golden splash like an egg-yolk hitting a hot saucepan. Luckily, the peat ground is lumpy enough to ensure that I say awake for all the late-evening lighting effects.

At daybreak, the sunlight flashes back from every peat pool – showing me that I've got another 5 miles of intriguing soggy bogland to cross before my breakfast cup of coffee at the railway station's tearoom.

Oops – and sorry. I didn't mean to evoke any yearnful mountain experiences, honest I didn't!

Scotland's Cape Wrath Trail, northwards from Fort William: it's the walk that your entire walking life could be leading up to. It involves mighty mountains, great empty glens, and long, lonely lochs; windswept wild camps and bothies either sociable or squalid. You need legs, obviously, to cover 200 miles of rough country, plus as many mountains as your knees are ready to do the downhill bits of. But you also need a thinking brain, for the planning and the route finding. You need experience, to know which of the essential necessities can actually be left behind, which rivers are safe enough to cross even though they're just a wee bit in spate. Above all, you need a jolly good set of waterproof clothing…

We're high enough to be in the cloud, oh yes. High enough for the ground below to be black and peaty and bare. But not high enough for rock or ridge. Instead we drop off a peaty rim to a silver pool fading in the mist, and the bog cotton nodding at us in a gently derisive way. We go left around the silvery pool and the water goes left as well. So we turn left again, and now we're heading back where we came from. So we stop and see if we can get waterproof trousers over our very sore feet without falling over in the swamp.

The first three hours of Cromdale are a bit dreary. The next three are somewhat less fun than that. And when we get under a dry roof at Altnacealgach, it does seem like time for a pause to dry out.

Twelve months later (and very thoroughly dried out) we stepped out from Altnacealgach once again, and headed north on into Assynt. 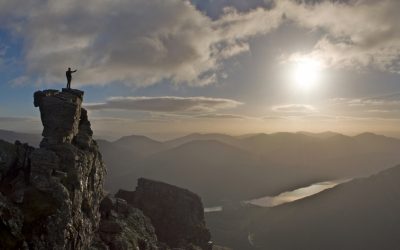 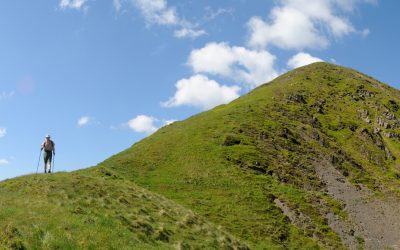 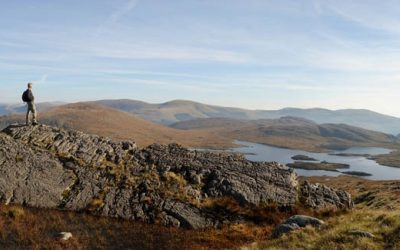 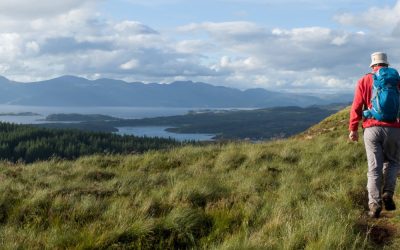 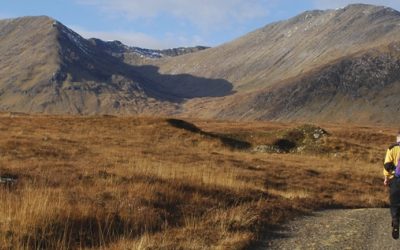 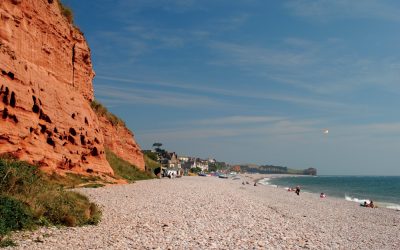