The county of Shropshire has been one of England’s best kept secrets for years. It is England’s most rural county with only two large towns –Telford and Shrewsbury, but it is blessed with some of the best hills and ridges outside the national parks. Find out why you should discover the Shropshire Way for yourself.

Where is the Shropshire Way?

Without being facetious the Shropshire Way runs a big loop through Shropshire. The original Shropshire Way was conceived by local Ramblers Association groups in 1978 to link Cheshire’s Sandstone Trail with the Offa’s Dyke Path. However, since its inception the Way had become a confused jumble of paths and it was not uncommon to arrive at a crossroads and have three or four waymarkers pointing in different directions!

In 2015 at the Shrewsbury Ramblers AGM proposals were made to identify a single main route and to re-form the Shropshire Way Association. After consultation a new 180-mile circular route (200 miles including the Whitchurch leg) based on Shrewsbury was devised using the best of the loops in the north and retaining the Sandstone Trail link to Grindley Brook. The southern route used the Clun extension rather than the shorter Long Mynd route. A Shrewsbury link was added for those who wanted either a north or a south circular route.

How long is the Shropshire Way?

The Shropshire Way is still an easy walk to adapt to your needs but the full route, including the Whitchurch leg, is 200 miles.

Shrewsbury and Ludlow have accommodation of all types, so finding something suitable will usually be relatively easy unless a major event is taking place. The same cannot be said of rural Shropshire and you should book well in advance. The stages between Ludlow and Wilderhope are particularly difficult and may involve a taxi ride to and from your stage ending.

The Shropshire Way is well-signed throughout, with orange waymarkers featuring a buzzard and small black arrowhead pointing in the direction of travel. More historical black and white waymarkers can still be seen in places, including the ones marking old alternative loops. In a very few places these appear to contradict the new waymarkers. In such cases always follow the line marked by the orange waymarkers.

How difficult is the Shropshire Way?

The Shropshire Way is divided into 15 stages and the maximum mileage for a day is just under 15 miles. The shortest day is just over 10 miles. So, depending on the season and your fitness, there should be plenty of time to enjoy a leisurely walk and take in all the sights.

Ludlow was described by John Betjeman as ‘Probably the loveliest town in England’.

You can walk in Shropshire at any time. Winter, when the snow has fallen on the higher ground, gives the hills a new dimension and most sogginess in the ground will be replaced by a crunch underfoot. When the sun is out, the atmosphere is often crystal clear and you can see for 50 miles in every direction. Some of the vegetation will have died back making progress along the paths easier. Woodland paths may however be slippery at this time.

Spring is a delightful time when nature is vibrant with new life and colour. The bracken is still red. In the woods the vivid chrome green of the new leaves contrasts with the abundant spring flowers that have poked their heads up above last year’s leaves. If it has been wet over winter, the paths across farmland and in the woods may still be muddy.

In summer, when the days have lengthened, the ground will have dried out, although some low-level paths may be overgrown with nettles and occasionally common hogweed. Make sure you take your waterproof leggings at this time for dew-drenched vegetation can soak you quite quickly as can farmers’ crops, which might well be tall at this time. Mid to late August is the best time to see the heather blooming on the Stiperstones.

In autumn the nights draw in again but the flame-colours of the bracken and the woods add great beauty to the landscape. Bilberry leaves have turned red and the heather to dark russet. Together they mix with the grasses to create a tapestry of colour any tweed designer would be proud of.

The Stiperstones has to be the most spectacular part of the route. Glaciation has left this fine ridge with spectacular jagged tors of quartzite rock and wide views across several counties, including the spires of Shrewsbury and the distant well-remembered mountains of Snowdonia. 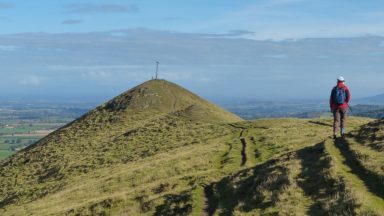 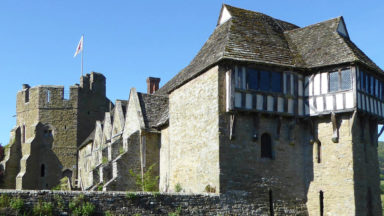 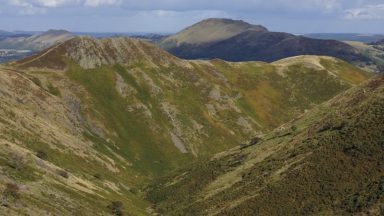 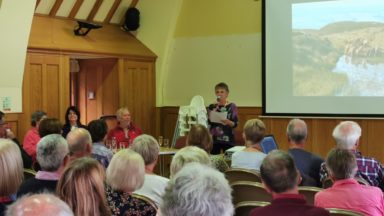 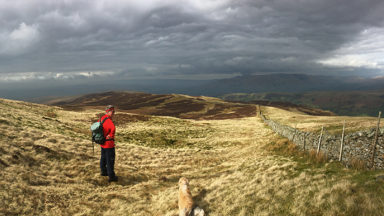 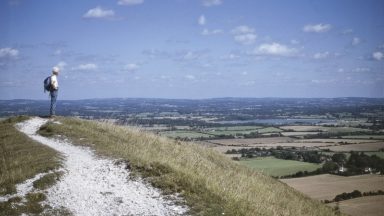