Guidebook to cycling in the stunning Yorkshire Dales. Describes 23 of the best circular day rides in the region, plus Stage 1 of the 2014 Tour de France (Leeds to Harrogate) and a circular 200 mile, 6-stage 'La Vuelta a Dales'. Day rides range from 14 to 57 miles. All routes are graded and include gradient profiles and 1:100K mapping.

routes are graded as short, medium and long and classified as moderate, hard or challenging. There are no easy rides in the Dales. The routes are suitable for all but the novice cyclist. Those with less experience may need to rest a little more often

Overview
This guide describes 23 day routes, graded by a combination of distance, climb and overall gradient, all suitable for road bikes and illustrated by detailed maps and profiles. In addition a six-stage tour takes in all the highlights, including Grassington, Leyburn, Hawes, Kirkby Stephen, Ingleton and Settle. And for those who really want to test themselves, the route of the Stage 1 of the 2014 Tour de France, a 206km loop from Leeds to Harrogate, is also included, with an option to close the loop without adding many extra miles.
Appendices include a route summary table to help you choose your route, lots of information about facilities for cyclists along the routes, taking bikes on public transport and basic bike maintenance.
The Vuelta a Dales takes in the best dales, passes and viewpoints as it passes through Grassington, Leyburn, Hawes, Kirkby Stephen, Sedbergh, Ingleton and Settle. The Yorkshire Dales have always welcomed visitors who enjoy the views. For cyclists, the national park and the areas overlapping its boundaries provide a splendid mix of varied scenic landscapes, an extensive network of roads and peaceful lanes and many cycle-friendly cafés and tea shops. With almost every turn revealing yet another stunning view, the Dales are an ideal area to explore by bike.
Table of Contents

Rail services are provided by Avanti West Coast (having taken over the franchise from Virgin West Coast in December 2019), Transpennine Express and Northern Rail. Cycle carriage policies of Transpennine and Northern are detailed in Appendix D of Cycling in the Yorkshire Dales. Avanti West Coast run trains between London Euston, Scotland (Glasgow and Edinburgh), North Wales (Holyhead) the West Midlands (Birmingham and Birmingham Airport) Manchester and many places in between. Trains can take up to four bikes. There is no restriction on folding bikes. There is no charge for reservations and these can be made at the time of buying your ticket, later at the station or by telephone.

Zarina's in Kettlewell has closed alternative option is The Cottage Tea Room.

The Grand Depart of the Tour de France in 2014 was a phenomenal success for Yorkshire with 2.5 million spectators lining the route for the first two days when it passed through the Dales, a UK TV audience of 16.6 million and a global TV audience of a staggering 3.5 billion people. The Yorkshire Dales were shown in all their splendour which has resulted in an increase in tourism to the area. Tourists spent £1.9bn in Yorkshire in the year to March 2015, 7.5 per cent up on the year before and this has increased ever since due to the introduction also of the annual Tour de Yorkshire cycle race.

No wonder cycling in Yorkshire has taken off so spectacularly in the last five years and not a single weekend goes by without us seeing scores of Lycra clad riders passing through Otley and llkley on their way to the Yorkshire Dales to either follow parts of the Tour de France route or others of their own choosing. llkley Cycle Club now has over 2,000 members whilst Otley Cycle Club membership is over 500 and increasing annually.

Now Cicerone books have issued a new publication aimed at these riders from our local towns, and the rest of the UK, covering 24 circular routes in the Dales plus also a six day tour of the region. The book has eight towns or villages used as starting points - Pateley Bridge, Grassington, lngleton, Settle, Reeth, Sedbergh, Hawes and Leyburn plus also the route of the first stage of the 2014 Tour de France from Leeds to Harrogate, a distance of 129 miles rather than the direct route on the A61 of 16 miles! Each of these starting points has a minimum of two routes from them, with three of the starting points having three and Grassington and Leyburn having four. Distances range from 12 miles to 54 miles although some of these shorter rides are classed as Short Challenging which will test most riders. The rides are classified as Short, Medium or Long and categorised as Moderate, Hard or Challenging!

The final chapter is entitled La Vuelta a Dales and is a six-day tour starting and finishing in Settle with a total distance of 170 miles (272 kilometres) and 12,050 feet (4,350 metres) of climbing throughout. Overnight stays are in Pateley Bridge, Leybum, Hawes, Muker and Sedbergh.

There are 14 sub-sections in the introduction - Geology, Human habitation, Wildlife, Getting there, Money, When to go, Accommodation, Food and drink, What to wear, What to take, Choosing your bike, Maps, Emergencies and Using this guide. There are also five appendices at the end of the book - Route summary table, Useful contacts, Campsites along the Vuelta a Dales, Cycles on public transport and Basic bike maintenance.

The book has useful route maps for each of the rides as well as a detailed description of the route and is punctuated throughout with various photographs of scenes, buildings and villages encountered throughout the twenty four rides. 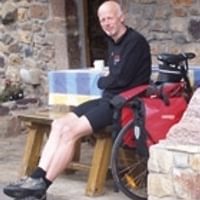 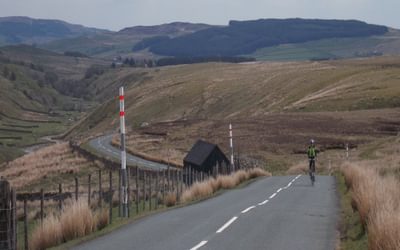 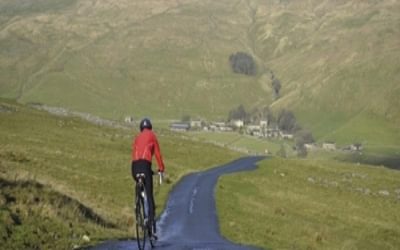 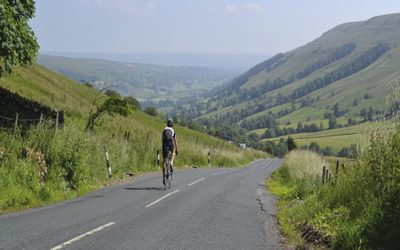 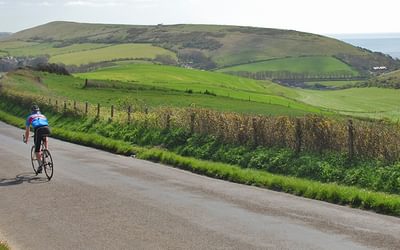 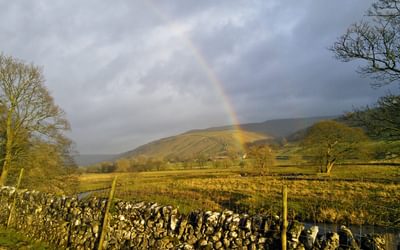