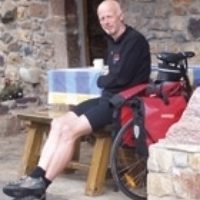 Harry Dowdell reveals what we can expect from the Union Cycliste Internationale Road World Championships, which will take place in Yorkshire in September 2019, and offers his own suggestions for cyclists to experience the events themselves.

The current road champions are Anna van der Breggen of the Netherland and Alejandro Valverde of Spain. Time trial champions are Annemiek van Vleuten of the Netherlands and Rohan Dennis of Australia. Britain has provided a number of champions, some household names and some not. Road: Beryl Burton (1960 and 1967), Tom Simpson (1965), Mandy Jones (now Bishop, 1982), Nicole Cook (2008), Mark Cavendish (2011) and Lizzie Armitstead (now Deignan, 2015). Time trial: Chris Boardman (1994), Emma Pooley (2010) and Bradley Wiggins (2014). Italian cyclists have been most successful with 136 medals (50 gold, 45 silver and 41 bronze) with Britain in seventh place (13, 11 and 9).

The Grand Depart of the Tour de France and the annual Tour de Yorkshire have established Yorkshire as a top cycle race venue. Harrogate will host all finishes, with the starts being shared across the county to give each of the races the challenges they warrant. 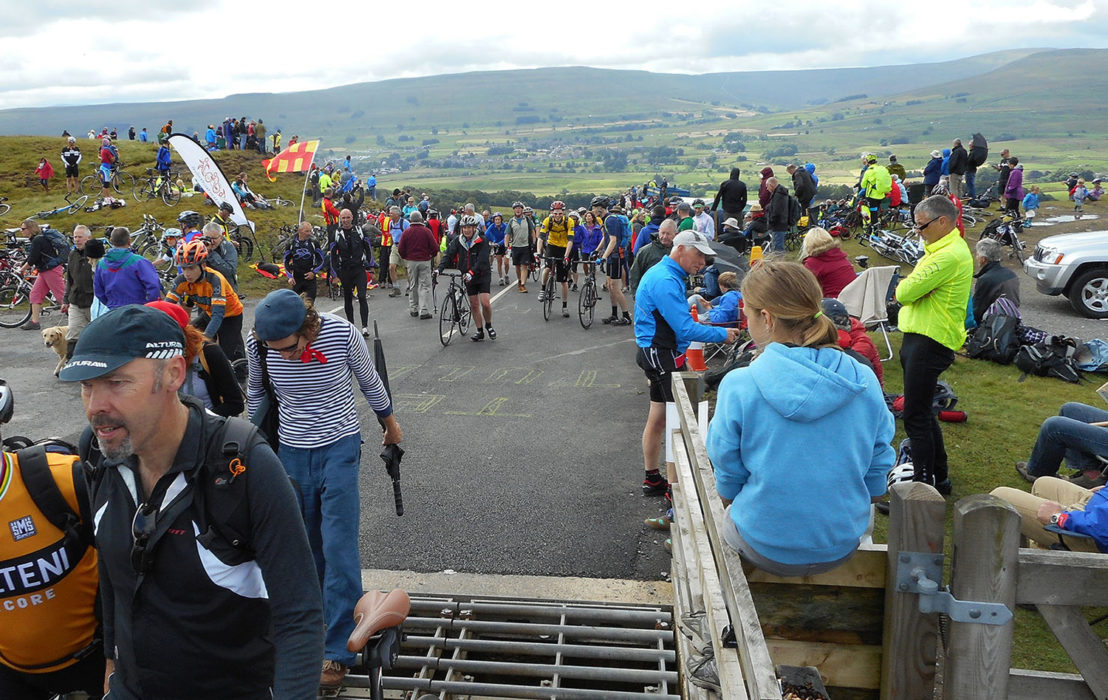 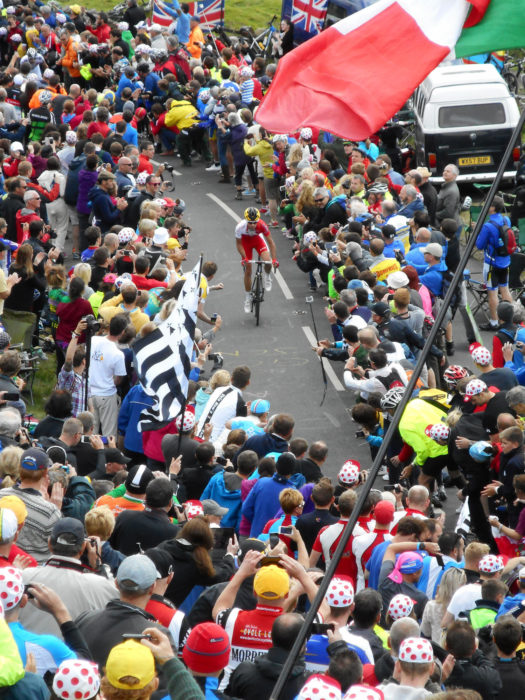 Many of the races finish with the Harrogate Loop. At 14km long, with 240m of ascent, it is a sting in the tail to those racing on it. Undulating throughout, with many tight turns, it not only goes though Harrogate’s poshest district (so that really is posh), it crosses Oak Beck twice. Each time on narrow roads with steep descents in and steep exits out. The bridges are on bends so there is little chance of carrying speed. All routes and race details are available online.

Racing in the Dales

As a lover of cycling in the Dales I hope readers don’t mind if I focus more on the races that visit them. That is not to say that you won’t find some excellent cycling on the Thorne and Hatfield Moors, along with the Isle of Axholme east of Doncaster, the Yorkshire Wolds or the Vale of York and the Howardian Hills.

The whole affair kicks off on Saturday 21 September with the Yorkshire Para-Cycling International. There is one route to Harrogate but depending the competitor’s group and classification they will start in Beverley (106km Men B and C4-5, Women B), Tadcaster (57km Women H5 and C4-5, Men H3-5 and C1-3) or Wetherby (41km Men H1-2 and T1-2, Women H1-4; 28km Women and Men T1-2). The four groups are blind and visually impaired, people with cerebral palsy, locomotor disabilities and hand cyclists. A full breakdown on classifications is available online.

Next come the time trials. Time trial racing is a compromise between adapting the most aerodynamic tuck position to reduce drag and the power the rider loses in that biomechanically compromised position to maximise speed. To this end, time trial bikes differ significantly from road bikes. The geometry is different, tri bars replace drop bars and the wheels have very deep rims. Time trial bikes are fast in a straight line. They are not as good as road bikes at cornering or hill climbing. Every time the rider leaves the tuck position they lose speed. This can be cornering or climbing or braking as the levers are on the horns not the extensions.

Sunday 22 September sees a new event – The Team Time Trial Mixed Relay. The format is simple: three men set off on the Harrogate Loop and when the second rider finishes the three women set off. Time stops when the second women crosses the line. Short, aggressive and very technical. Fun to watch but probably not fun keeping an effective working paceline through the technical sections. Bike choice will be interesting. Many will wonder what has come over the UCI? Women doing the same course and taking the glory leg. Whatever next.

Monday 23 September The Junior Individual Time Trials on the Harrogate Loop. The men do two while the women do one.

Tuesday 24 September Men under 23 and Elite Women’s Individual Time Trials starting in Ripon. The 30km route is along the undulating and sinuous A61 to Ripley where a detour takes it into Nidderdale. There is an unwelcome 8% climb to Bedlam before a straightforward descent into Birstwith. Another climb and this time a trickier descent with poor sight lines will take them to Hampsthwaite for an extended climb to the A59 and a straightforward run in to Harrogate.

Wednesday 25 September Men’s Elite Individual Time trial. The first championship to visit the Dales, albeit the fringes. The 54km route starts in Northallerton and is mostly on mostly quiet roads and worth riding in its own right. The roads are very rarely straight, with sapping undulations throughout. There are two extended climbs coming after Bedale (2.1% for 5.4km) then Masham (3.7% for 2.6km) and on neither are the gradients constant nor steep, but noticeable. There are two places where tiredness or loss of focus can result in costly mistakes. The first is on the descent from Grantley where the road narrows through a series of tight bends with high hedges and poor sight lines. The second is the short but steep climb from Hebden Beck beyond Sawley. After a fast descent the climb out follows a right and left sweep of the road and hits 20%. Carrying speed will be vital. Having got this far it’s on to Harrogate, but no Loop for this race. Overall, a route that looks straightforward but will punish anyone lulled by the early sections.

A possible ride from Harrogate would be Beckwithshaw, Bland Hill, Summerbridge, Pateley Bridge, Lofthouse and Trapping Hill to join the route at Masham and follow it to the finish. Approximately 90km/56miles with 1300m of ascent in around 4hr 45min riding time.

World titles are awarded to individual winners, with their national team mates putting them in a position to win. They help them through the race by fetching drinks and food, keeping them fresh by providing someone to draft from or pushing the pace as required. At the start there will be riders in with a chance of a medal and others who will be there to sacrifice their race for them. As the support riders burn themselves out expect to see them drop out. This is different from multi-day races where those support riders must finish to provide support the next day.

Thursday 26 September Men Junior Road Race. 147km starting in Richmond. The first race that makes full use of the Dales. There are three significant climbs. Shortly after the start is the climb to Catterick Garrison. Then Kidstones from the Bishopdale side, a 230m climb over 3.4km. Not the best-known climb but far more challenging this way than from Wharfedale. With a narrow road, poor sight lines and the steepest sections nearing the top, expect the peloton to fragment. The final significant climb is between Bolton Abbey and Blubberhouses on the A59, a 220m climb over 6.2km. A wide, fairly well-graded road so any breaks will depend on the riders’ hard work. Should the race still be together towards the end the three Harrogate Loops should prove decisive. 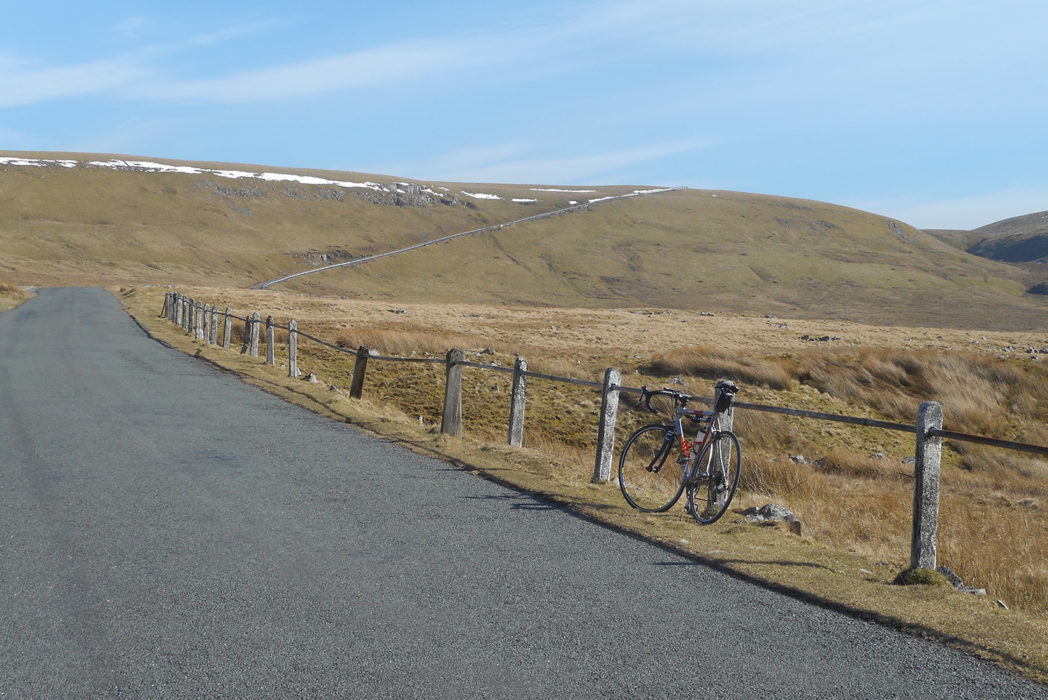 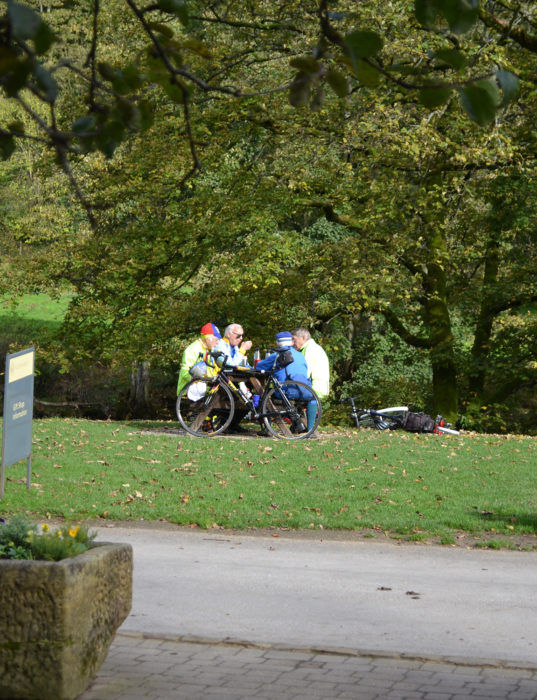 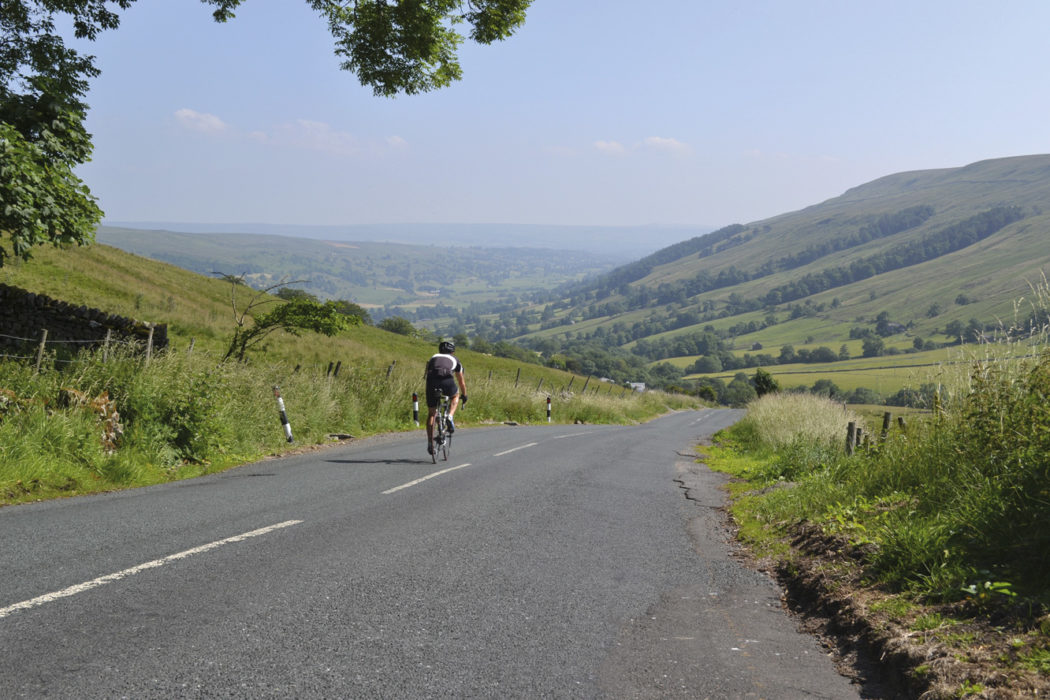 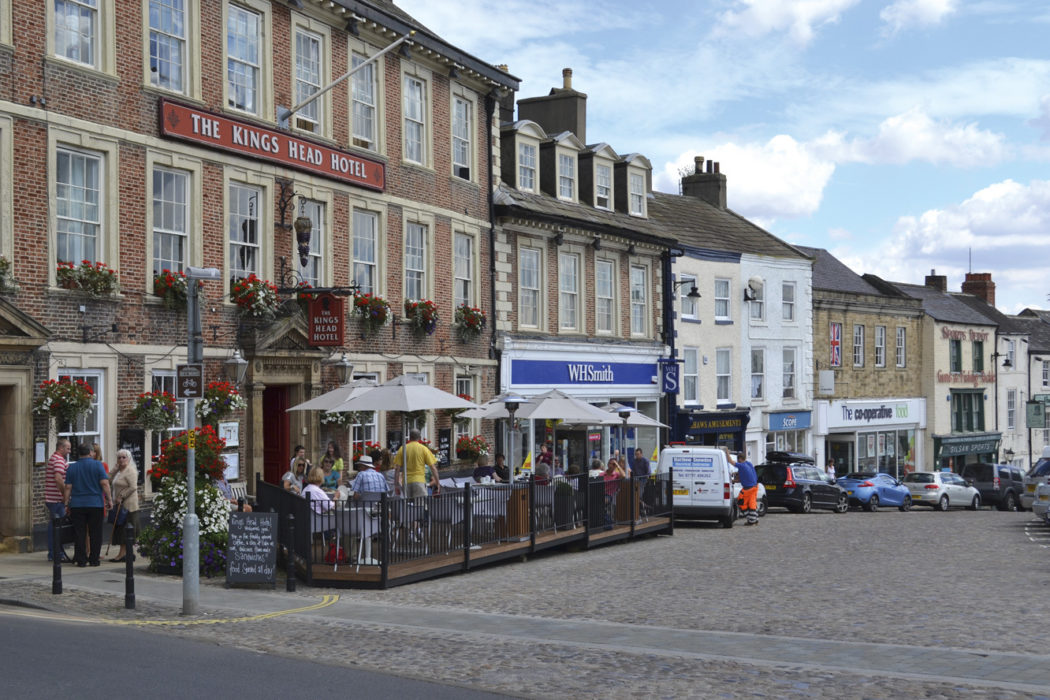 Friday 27 September Men Under 23 Road Race. 193km starting in Doncaster. The first half travels north and approaches Ripon from the Vale of York before entering the Dales. From Ripon to Nidderdale the route climbs with a couple of descents at Grantley and Fellbeck to break the rhythm. A quick descent through Blazefield takes the riders into Pateley Bridge and the bottom of Greenhow Hill. 290m over 4km with the gradient varying from benign to bloody minded. Not a hill any contenders will wish to start at the back of the field. Good fast roads and three Harrogate Loops lead to the finish. 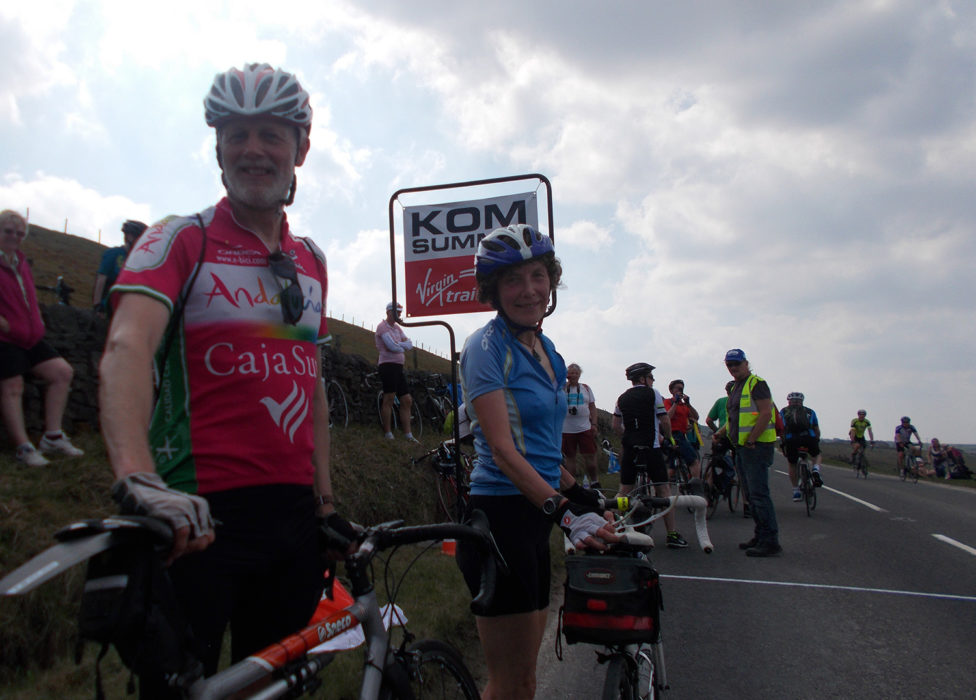 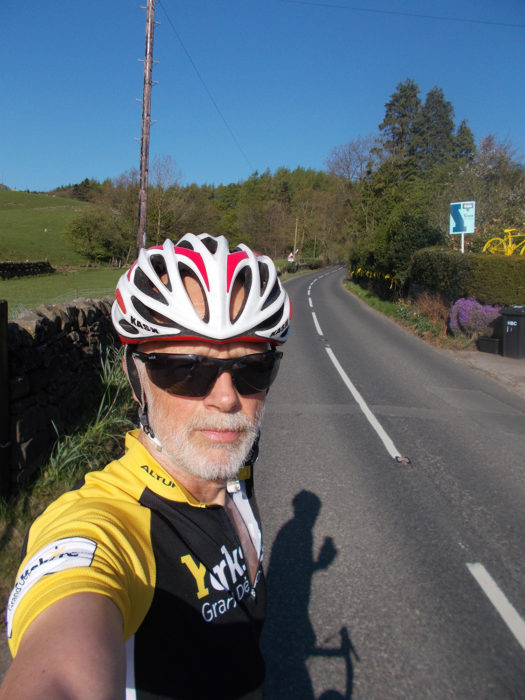 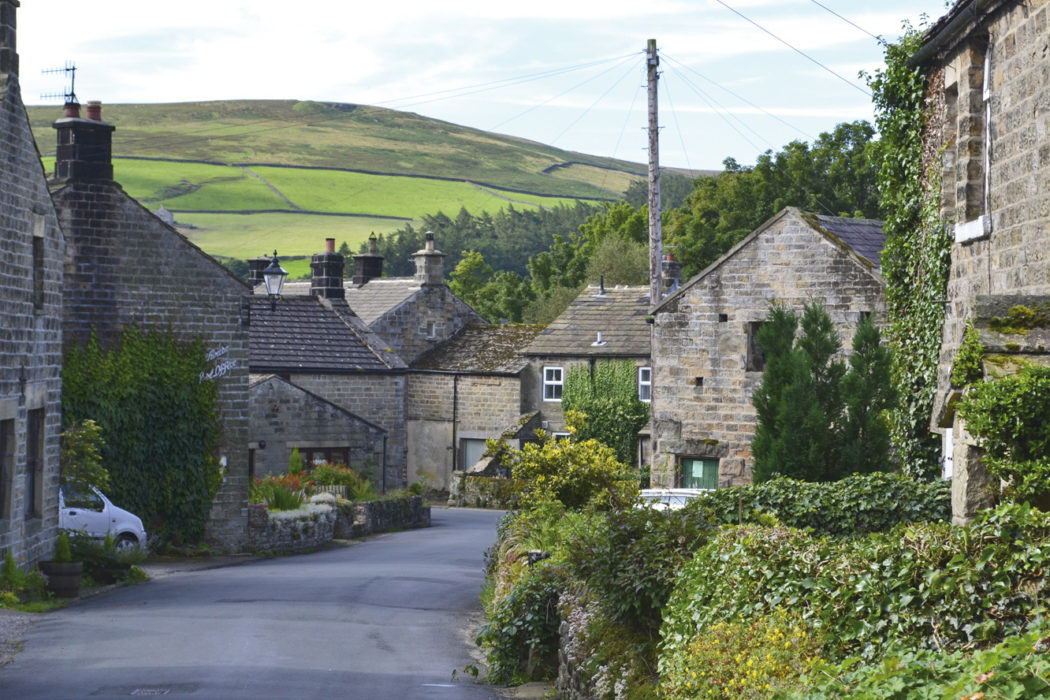 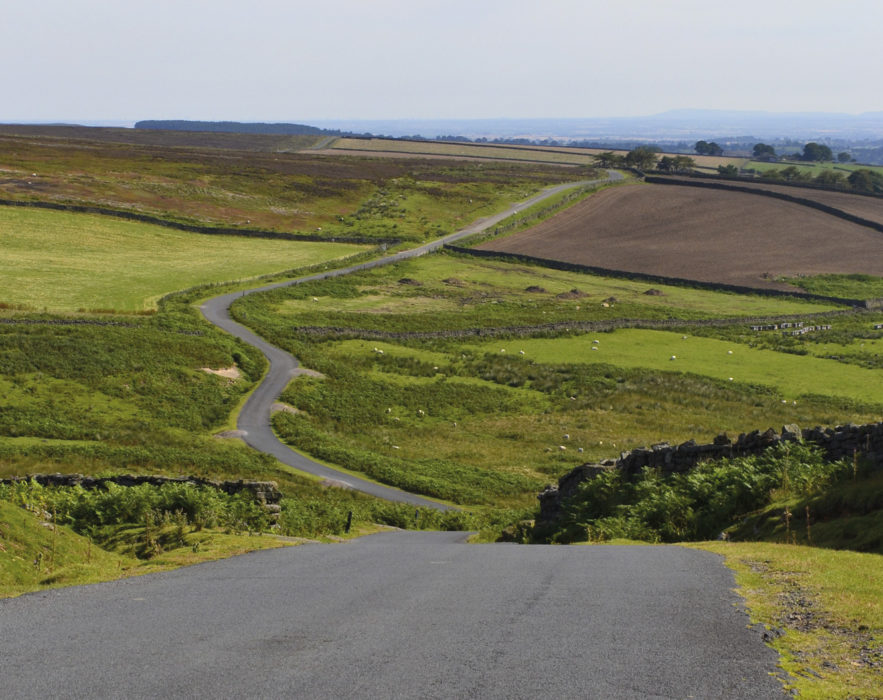 Saturday 28 September Women Elite Road Race. 150km starting in Bradford. Definitely one for the Dales lovers. Apart from the section from Masham to Ripon, the route is full of nothing but climbs and descents mostly short and steep. From Otley the route is rural and on the north side of the Washburn is the second biggest climb of the day; Lindley Bank with 175m of climb over 1.8km. Early in the race it will test rather than break riders. Continuing north into Nidderdale it now follows the 2017 Women’s Tour de Yorkshire route including the big hill of the day: Trapping Hill with its narrow, twisty and steep entry. The 260m of climb over 3.1km will see the end of medal hopes for many riders. There follows a fast descent down Burn Valley through Masham and then to Ripon. From Ripon the climbs start again, including the climb from Hebden Beck used on the men’s time trial, on the return to Nidderdale. It was the climb from Shaw Mills where Lizzie Deignan broke away to take victory. However, this time the women will take in three Harrogate Loops before the finish. 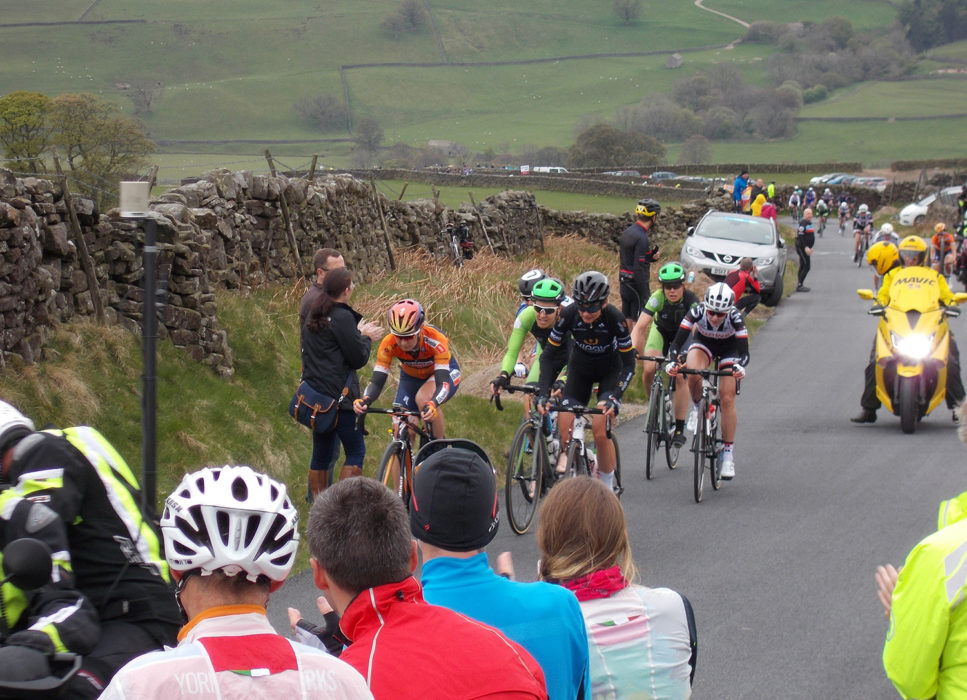 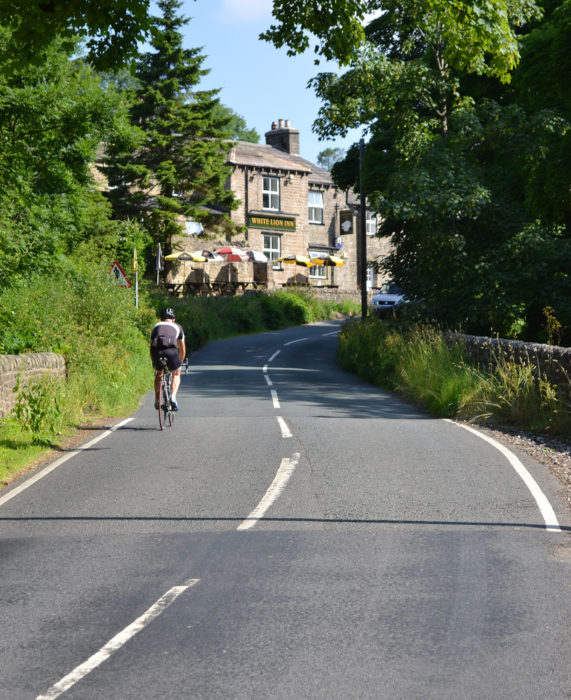 Sunday 29 September Men Elite Road Race. 285km from Leeds to Harrogate. Taking a more direct route from Leeds to Otley it is basically a reprise on the Tour de France Grand Depart. Three big hills; Kidstones the easier way with 150m climb over 2.3km, Buttertubs 300m of climb over 5.5km and Grinton Moor 240m of climb over 4.3km. A long and fast run in to Harrogate but with seven Harrogate Loops to finish. A hard day in the Dales.

A possible ride from Harrogate would be Beckwithshaw, Leathley and Farnley before joining the route at Otley. Approximately 201km/126miles with 2400m of ascent in around 10hr riding time not including the Harrogate Loop. A shorter option would be to start at Pateley Bridge and join the route at Threshfield via Grassington. Return to Pateley Bridge by leaving the route at Masham and proceed via Grewelthorpe, Kirkby Malzeard and Laverton. Approximately 149km/93miles with 2200m of ascent in around 7hr 45min riding time.

So ends the World Cycling Championships in Yorkshire. What next? Another Tour de France Grand Depart? Most likely. The Vuelta? Quite likely. Over the next five years we will find out.

Coast to coast across Lancashire and Yorkshire, with six circular day rides 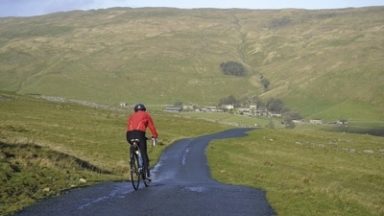 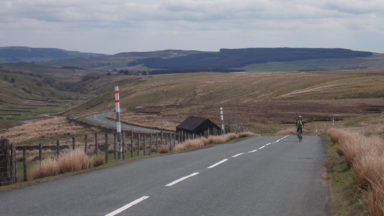 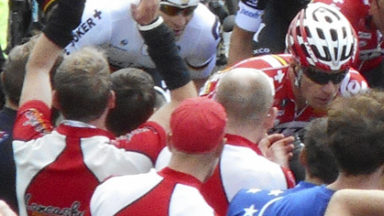 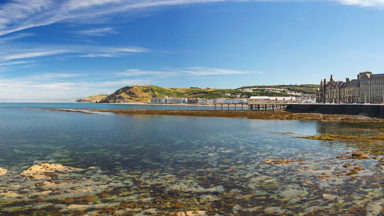 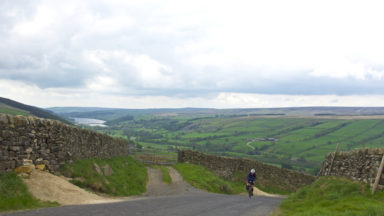