Kat Morgenstern describes the Seensteig, hidden away in Germany’s beautiful Black Forest. The circular route is surprisingly diverse and interesting, taking in mountains, ancient tarns, and joining up with the scenic Westweg.

In German, ‘see’ means ‘lake’, which in this case, alludes to the theme of a 90km circular route through the northern Black Forest. Looking at the map, this may give pause for surprise, as it will quickly become apparent that lakes are few and far between in the Black Forest. The largest is Titisee, in the southern Black Forest near Feldberg, and there are also some reservoir lakes, such as Schluchsee. But for the most part, lakes of any significant size seem to be rare.

However, depending on the scale of your map this impression is a little deceptive. There are, in fact, some small lakes, which are hidden among the pines as dark and mysterious pools, tucked at the base of various mountains. They are relics from the last ice age. These ancient tarns have become partly overgrown and evolved into special little worlds of their own. Small though they are, they are considered precious habitats and are protected as such.

As one might expect, the Seensteig visits several of these little tarns along its route – but there is a lot more to it. It also joins the famous Westweg, the Black Forest’s first, and by now classic, long-distance route for one of its most scenic stretches along the main spine of the northern mountains.

The relatively short individual stages (15–21km) make this a moderately difficult walk, although some of its ascents and descents are quite steep. It is also a surprisingly diverse and interesting route.

Although this is a circular trail, it makes sense to start in Baiersbronn, a small community comprised of several villages, near Freudenstadt. This rural backwater’s unlikely claim to fame is Michelin stardom. Improbable as it may seem, Baiersbronn has a higher concentration of Michelin stars per square mile than any other place in Germany. However, if you think this is all about prestige and glamour – that is not the way it works in the Black Forest. This is still a rural area, the luxury of which is perceived in its natural treasures: the freshly gathered herbs, mushrooms and berries are the real stars of its ‘haute cuisine’. 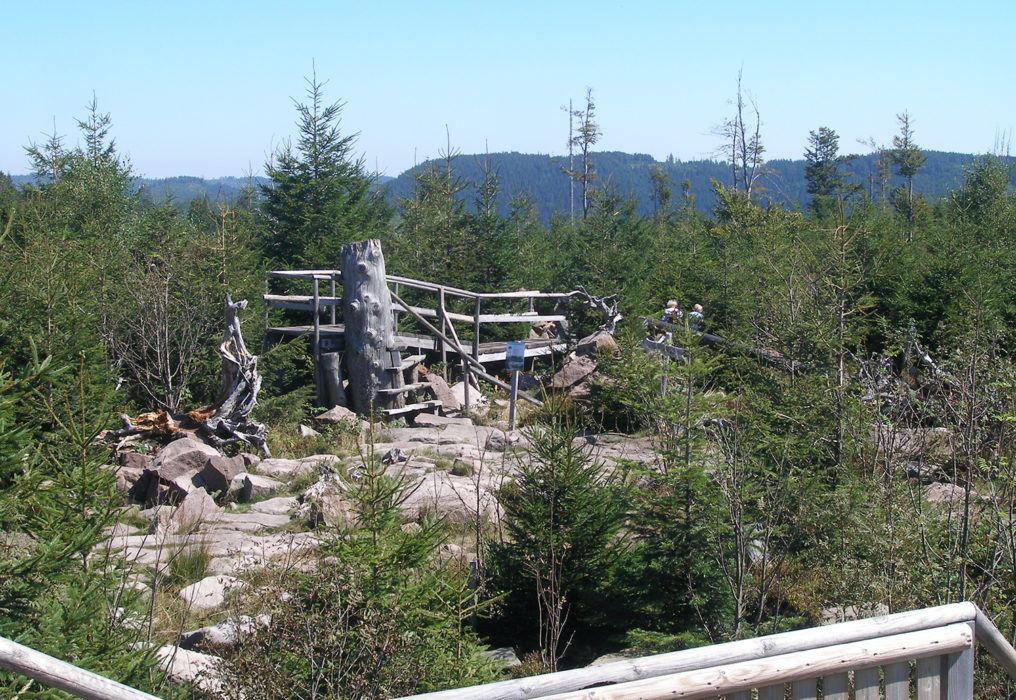 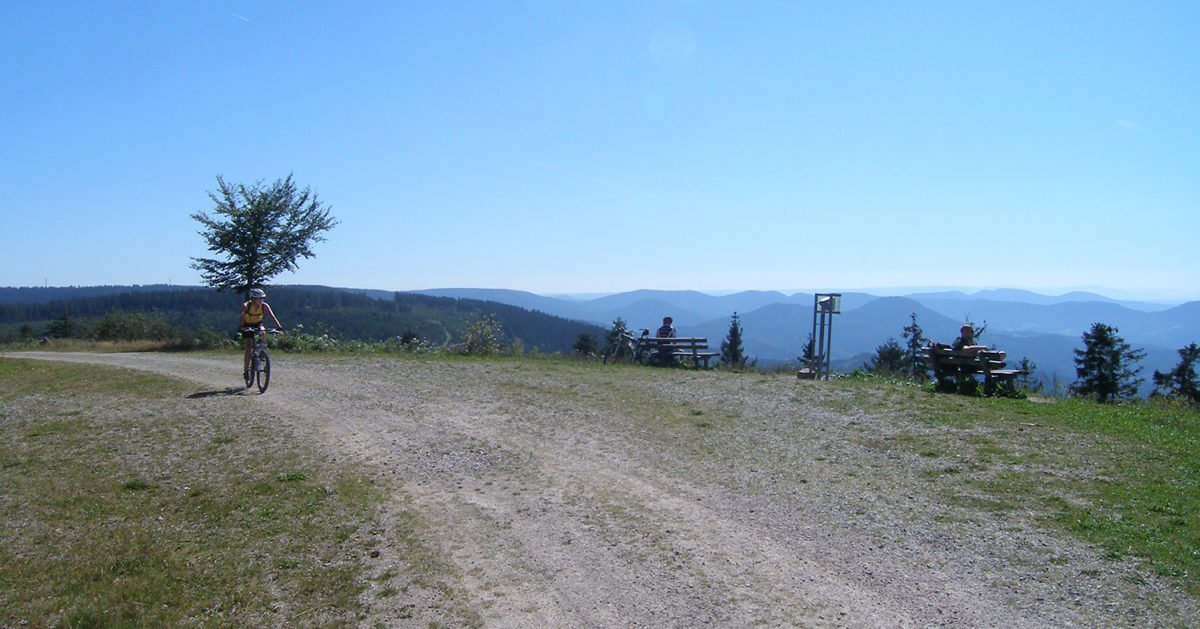 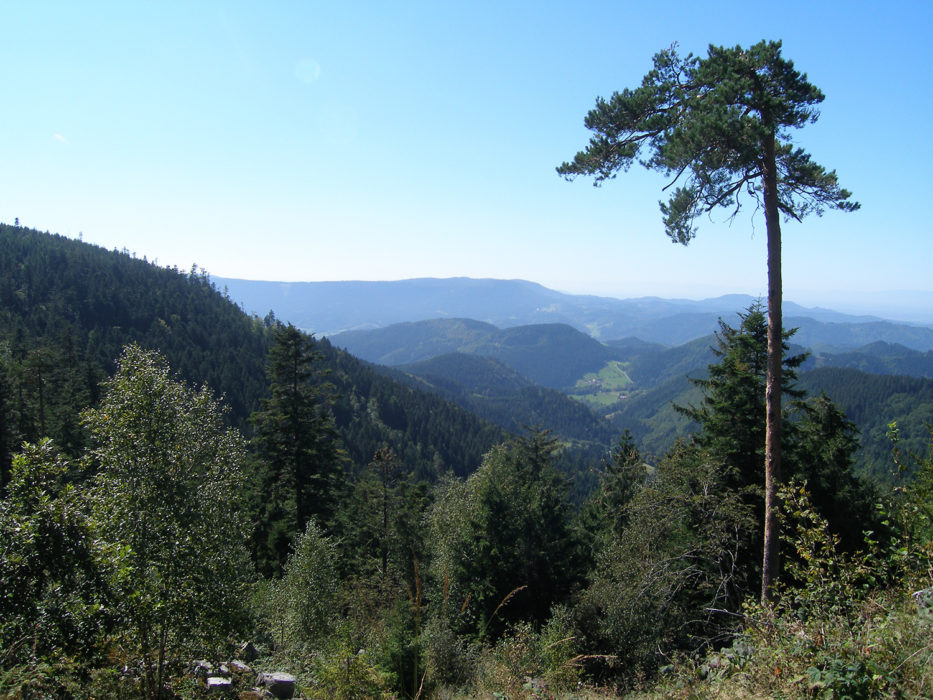 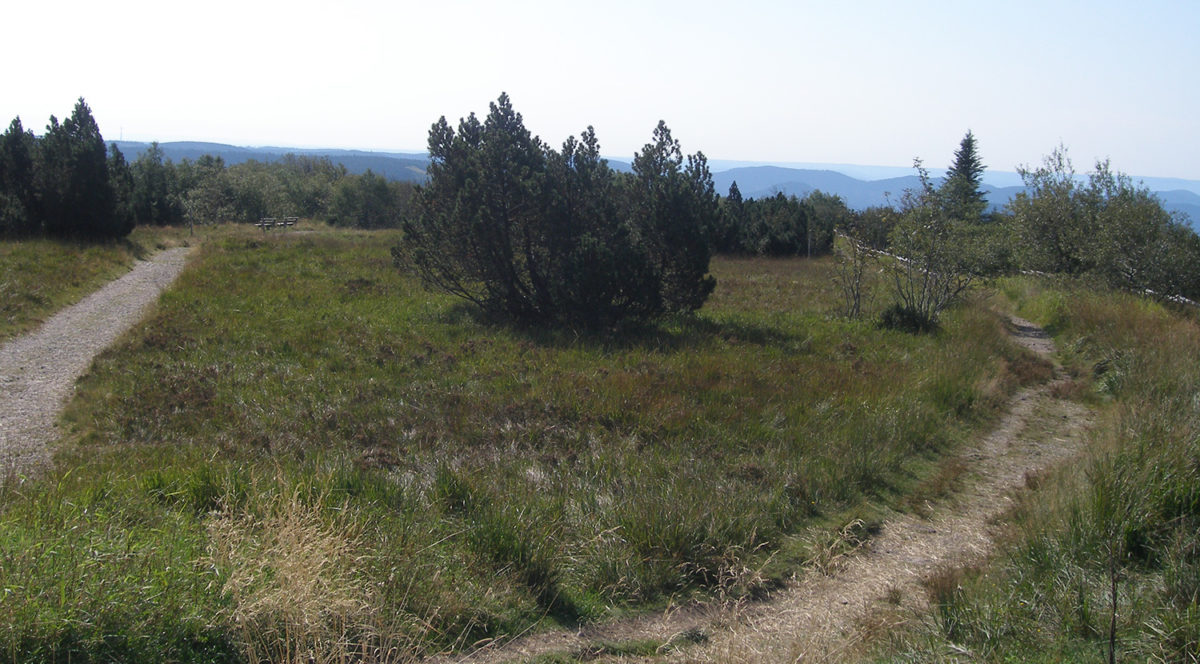 But, enough of the food, let’s talk about the walk! The Seensteig starts off in Baiersbronn and within an hour or so, it reaches Sankenbachsee, its first tarn. This is a popular picnic spot, not least thanks to the waterfall, which plunges down some 40m into the lake. The trail climbs up right next to the falls and ambles through the forest. Soon, the views open up on the Kniebis plateau – but not for long. The trail returns to the forest, and from a new viewing platform you are treated to great views of Ellbachsee and the rippling mountains beyond. The trail descends to the lake itself, where you have a choice of either taking an adventurous path through some rough terrain, or the more comfortable, but less exciting forestry track to return to the valley. The stage ends in Mitteltal, about 3km from Baiersbronn.

The second day is a feast of fabulous vistas – weather permitting. After climbing back up to the ridge the path mostly stays up there and joins the Westweg, offering far-ranging views across the blue bands of the Black Forest Mountains, and the silhouette of the Vosges on the other side of the Rhine. The route also traverses Lotharsteig, an area that was devastated by a hurricane in 1999. In the aftermath, unlike in most areas, the part that is now Lotharsteig was left undisturbed in order to allow the forest to regenerate naturally. It is fascinating to see how nature has managed to repair itself after such a calamitous event.

Day two ends at Schliffkopf (1053m), a beautiful open mountain top that lies in the newly established Black Forest National Park, close to the B500 road. There is a ‘wellness hotel’ and a very basic trekking campsite nearby. Other options are further afield, but many hotels offer a pick-up service, if arranged in advance. 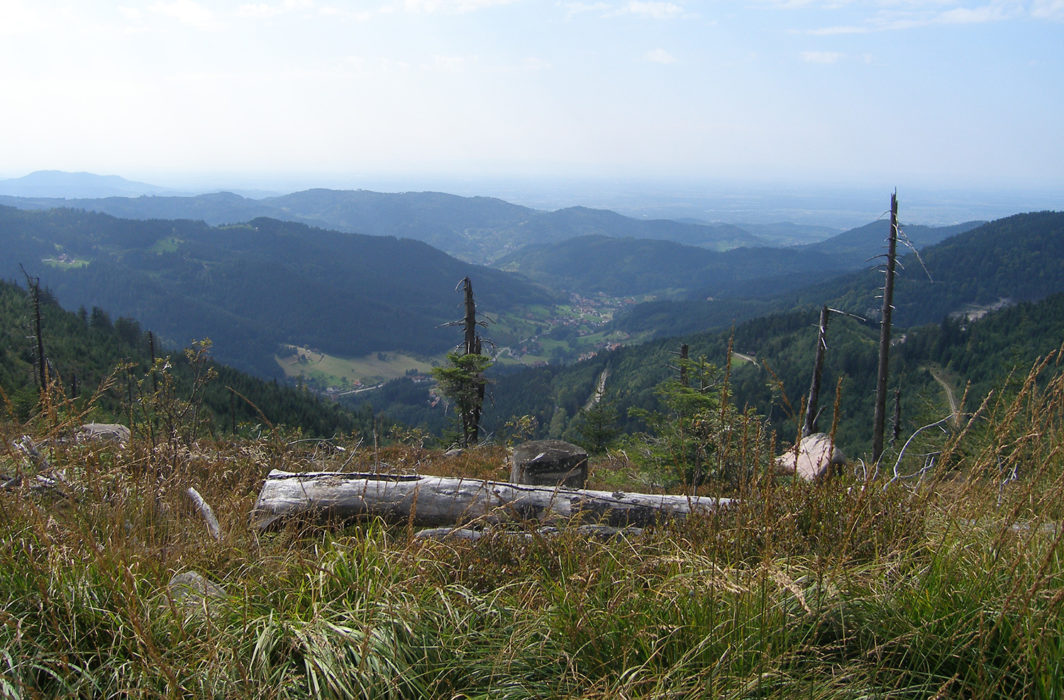 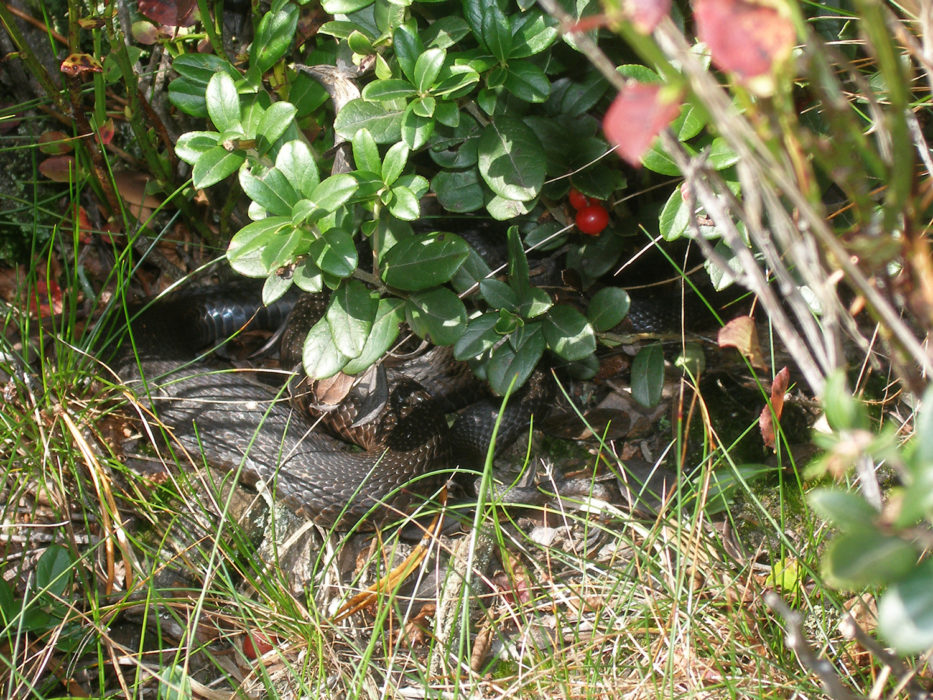 On the third day, you can decide whether to continue with the Westweg along the ridge, or to take a quieter route to get to Ruhestein, the home of the Black Forest National Park Visitor Centre. Ruhestein is a busy spot, but crowds disperse a couple of kilometres away from the areas that are most accessible.

From Ruhestein to the end of this stage at Mummelsee, the trail joins the Westweg again. Mummelsee is also a busy tourist spot on the B500, with a hotel right next to the lake. Given all the tourist commotion, especially on weekends, you might consider finding alternative accommodation nearby – although when night falls it is pretty quiet, even there. 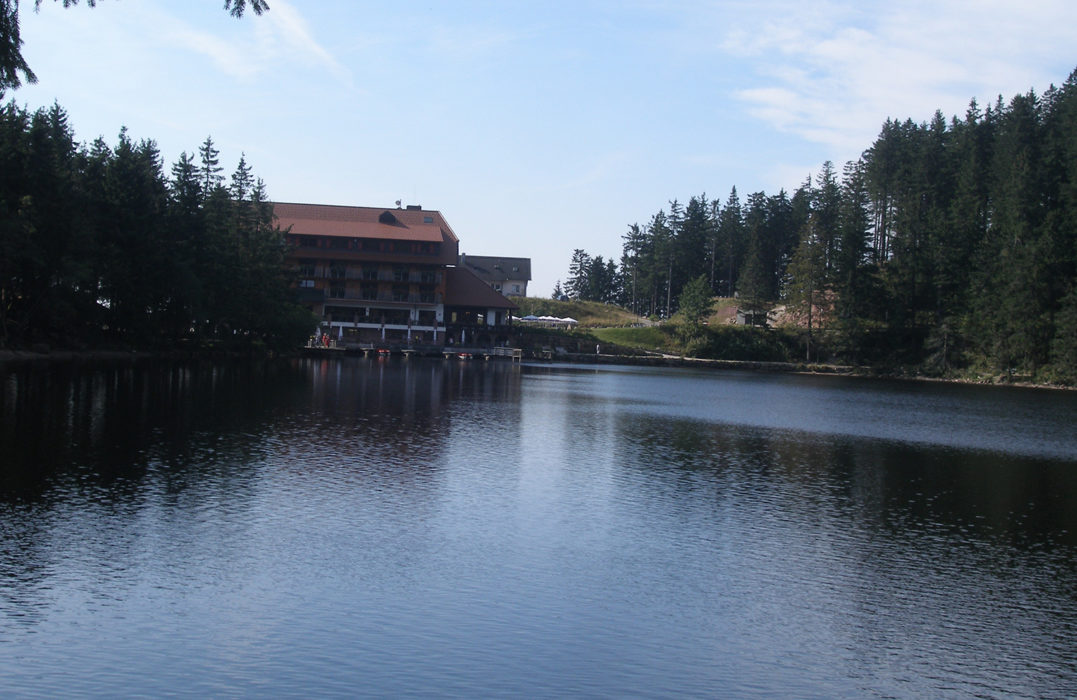 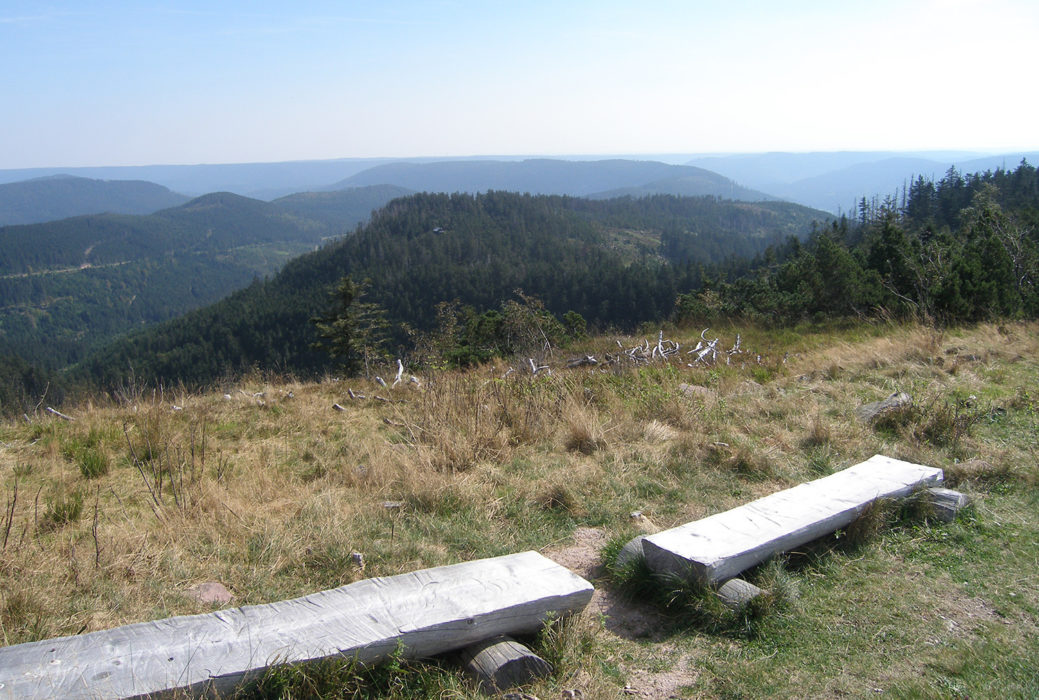 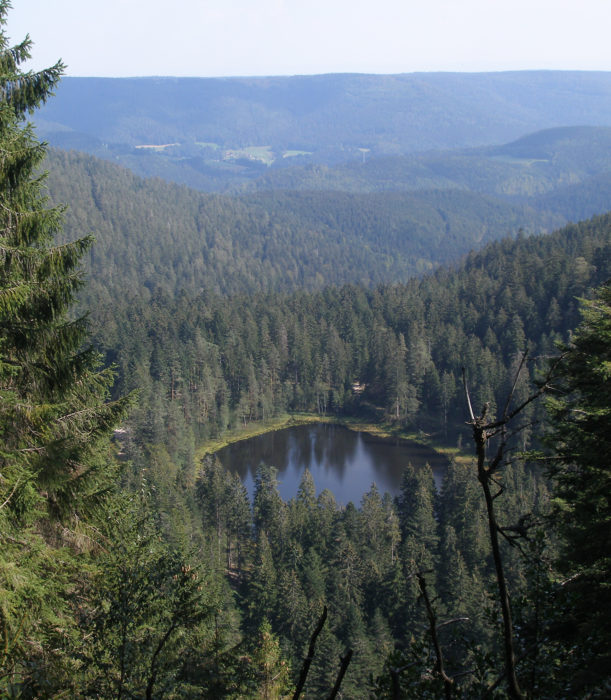 Day four is a quiet day and well away from any tourist hot spots. Starting off with a short climb to the top of Hornisgrinde (1164m), the highest peak in the northern Black Forest, the trail soon steers clear of all the hoo-ha and takes off on a pleasant amble on, or below, the ridge to reach Schönmünzach, a typical little Black Forest town.

The final stage is not described in the Hiking and Cycling in the Black Forest guidebook, since at the time I walked this trail, and for a long time thereafter, this section was closed due to storm damage. It has since been reopened, but I have not yet had a chance to return. However, according to rumour, it is said to be a highlight of this route. From Schönmunzach the trail climbs up to the beautiful Huzenbachsee, and down to Tonbach Valley, before returning to Baiersbronn.

From source to sea through Switzerland, Germany and the Netherlands 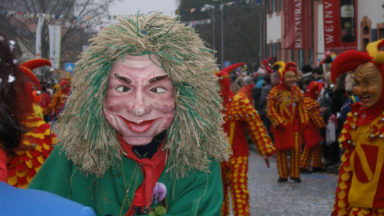 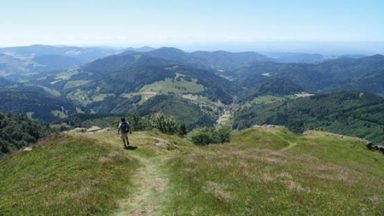 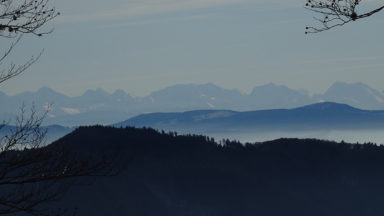 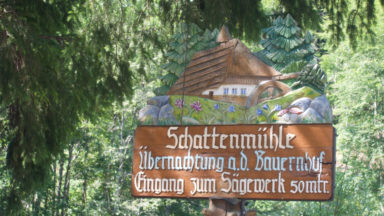 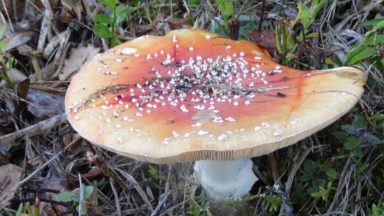 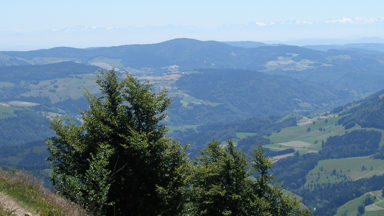