The ascent of Jebel el Kest in Morocco’s Anti-Atlas is a stunning day in remote mountains – one of the very best hill days. Cicerone’s Publisher, Jonathan Williams, explored the area with his son Joe in February 2015.

‘Anergui...’ Chris Bonington’s always-quiet tone dropped a notch as he repeated the name, his eyes seeming to glaze over as though he was remembering big mountains in great ranges. I was impressed. All I’d done was mention this particular approach to the little-known Jebel el Kest in Morocco’s Anti-Atlas. It must be quite a hill. There was clearly a lot to look forward to on our walking and scrambling trip. Over the last twenty years the Anti-Atlas has grown into a remarkable arena for climbers. Massive amounts of rock at good climbing grades, easy access, good prices and great people have all made this area a new home-from-home for a generation of climbers: Les Brown, Joe Brown, Chris Bonington, Claude Davies... all well-known names on the friendly streets of Tafraoute.

A town of 5000 people, Tafraoute is set off to the south of Jebel el Kest, giving it astonishing views to the quartzite range that glows bright pink in the evening light. It’s located in an area the maps refer to as ‘The Granite Area’, full of piles of strangely shaped boulders. There are several hotels and a few restaurants, plenty of shops, pharmacies, a weekly souk, and a small medical centre (with which we had dealings the next day – another story). The French influence is unmistakable; well taught in the schools it’s one of three languages – with Arabic and Berber – spoken throughout Morocco. Those involved in adventures and other trading all have excellent French and a surprising amount of English. And catering to climbers is only one of Tafraoute’s enterprises. It’s a stop-off for the many French who tour around Morocco and into the Sahara, often in sizeable motor homes. This has led it to its development as a major centre for carpet selling, and the two emporia that service this business have become masters of the art. It’s unlikely your resistance is even close to a match for their sales talents, so it’s best just to embrace it. Tafraoute is as a fine place as any to buy a carpet, rug or throw and it will make a valuable contribution to the local economy.

Located about 3 hours’ drive south east of the Atlantic resort of Agadir, a 4-hour flight from the UK, this remote area on the edge of the Sahara desert can be reached inside a day. The drive down is fascinating – remarkably little traffic but a whole new culture with shepherds and flocks crossing the road, towns and Berber villages large and small, roadside water stalls, women in niqab and hijab of all colours, minarets and wild mountain scenery, as well as the inevitable game of chicken as two vehicles pass on the road eroded by the perpetual sun and occasional rain down to a singe track. Winter temperatures are ideal for walking, but the main season is March to April and October into November. In mid-February we had cloudless days up to 20º and night-time temperatures of 8 to 10º – fine Cumbrian summer days.

Jebel el Kest itself is just the highest point in a long and complex ridge extending over 35km and accessible from both north and (more usually) south. There are a few paths – original Berber shepherd trails above the villages – but much of it is trackless. And everything up there is either sharp or spikey.

There is a lot more vegetation than meets the eye around the – to say the least – abundant rock. And both are well capable of defending themselves against the toughest intruder.

There are printed maps of the area, but not exactly of an OS standard. Setting these aside the most useful was a well-drawn extract from the climbing guide that described a climber’s route in three big steps, 3000m of climbing. But we were walking and scrambling. Our gear included 30m of rope, lightweight helmets, a few slings and Karabiners – enough for an abseil or protection if the scrambling turned serious. Our other map resource was the Open Cycle Map option in the ViewRanger app that proved essential. Contours and a location dot are a powerful resource when you need them.

Anergui, the start point at 1600m, is a 50-minute drive from Tafraoute – and what a drive, the single-track road climbing endlessly over unprotected cliffs. It’s a first gear crawl, a dramatic and ‘interesting’ first leg of the day, as much part of the experience as the mountain itself. They say of the Alps that some of the approach days in the western Alps can be as hard as some of the summit days in the eastern Alps. Here was north Africa’s take. Our first mistake (really our only mistake) came as we left the village and followed the path along the edge of small terraces of almond trees in blossom. We stayed low while the route – even here not really a path – climbed higher. So ten minutes into the day we found ourselves scrambling out of a dry gorge to get back on track.

The route unfolded, interesting at every stage. A good path up a narrow gully to a col, a short descent, an intricate route to climb the other side of the valley, an untracked climb to the ‘south col’. Here came the first decision – the scramble or climb (graded easy) up the south ridge on the Great Ramp traversing around the mountain. We took the ramp, then a steep uphill, then a walk over slabs to the summit.

Summit views were spectacular – along the ridge in either direction, north to the main ridge of the Atlas Mountains, south to the Sahara.

We had the world to ourselves. It’s not a busy area. We heard some climbers, or maybe geologists, as we approached the first col. A French couple with a guide arrived at the summit 30 minutes after we did. I suspect it was a busy day for February.

The next decision was: which way down? Back the way we came to down climb the south ridge, or something else. ‘There are some cairns down there,’ Joe pointed to the west. There were no paths on any of the maps we had, we had seen no write-up or mentions of the west ridge, but we were there to explore, so the west ridge it was. What followed was a remarkable hour as the path snaked around the difficulties and cliffs, finding truly elegant routes round the obstacles and drops. And it wasn’t a hard route; we gave it a scrambling grade of about 0.5, on a par with walking down Striding Edge at home. By another measure I only stopped using poles for a couple of minutes. The only downside was that we ended up to the north and had to traverse under a cliff for a kilometre or so when we thought the path could well have stayed up there right on the ridge.

There followed a longish traverse across country and another opportunity to tackle the spiky vegetation to a col we had seen earlier in the day, then a drop down and climb to the first col to rejoin our outward route for the last 200m of descent and 2km to the village. And then, of course, the drive back down the mountain road – as dramatic an end to the day as it was a start.

Over the tagine that night we looked back over the day… had we ever found a route so natural, interesting, remote? No, we both thought. It was one of the very best mountain days either of us knew of, and, even better, there are probably 3 or 4 more routes to explore on Jebel el Kest and many, many more in the surrounding area. 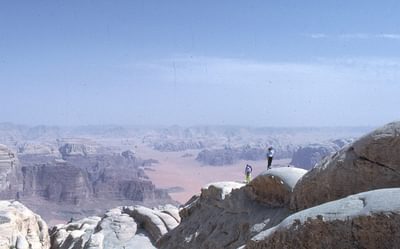 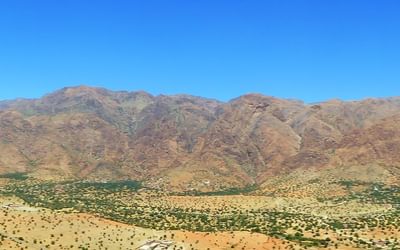 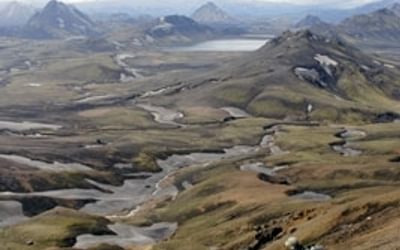 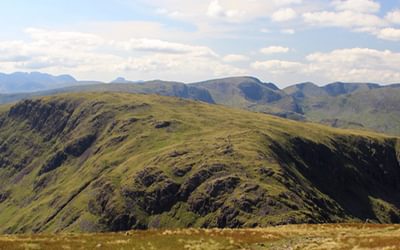 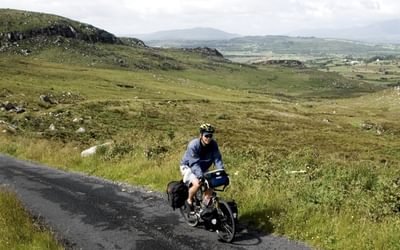