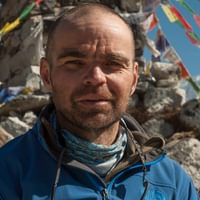 A flood on the Tsarab and Zanskar rivers in Ladakh in May 2015 caused significant damage. Many bridges and parts of newly built roads were destroyed affecting some trekking routes - particularly in Zanskar. Trekking is possible but alternative pathways need to be followed in places. As not all the bridges were rebuilt this summer, the damage will also affect next season's treks.

Radek Kucharski, author of Cicerone's trekking guide to Ladakh reports that there was a flood on Tsarab and Zanskar rivers in Ladakh in May this year. No casualties were reported but damage was significant. Many bridges as well as parts of newly built roads were destroyed. The flood affected some trekking routes - particularly in Zanskar. Trekking is possible but alternative pathways need to be followed in places. As not all the bridges were rebuilt this summer, the damage will also affect next season's treks.

It all started in the early January 2015. People of the Lungnak (Tsarab / Tsarab Lingti / Lingti) Valley noticed an unusually low level of water in the river. A helicopter was sent to the upper part of the valley to research this. The Tsarab River (also called Phukthal or Phuktal River as it passes near to the Phuktal Monastery) has its source on the main ridge of the Great Himalayan Range near to Baralacha La - the major pass on the Manali - Leh road. It flows near Sarchu, is followed by the road for a while then enters an uninhabited valley just below Barandy Nala (Gian) where the Manali-Leh road leaves it to climb to the Nakee and Lachulung passes.

The trekking route number 2 described in my guidebook follows that valley. It is one of my favourite trails in the region and I had the chance to trek it again this September. The route follows the river for three days then crosses some high passes to detour a very narrow section of the valley and return to it before reaching the Phukthal Monastery. And this is the place where a huge landslide blocked the valley in winter and caused a lake to be formed. The lake was discovered by the helicopter in early January. The Tsarab River passes near to Phukthal, joins Kargyak which flows from Shinkul La along the Darcha-Padum popular trekking route (Trek 3 in the book) and reaches Padum - the major settlement of Zanskar. It joins the Stod (Doda) River there and flows towards Central Ladakh and Indus, to the North as the Zanskar River. Winter is the season when the Zanskari people (people of the part of Ladakh located in the upper part of the Zanskar Valley and its tributaries) use the frozen Zanskar river as a trail to Central Ladakh. With roads closed for winter, the frozen river trail - so called Chadar Trek - is the usual winter way out of the Zanskar Region. It is also quite a popular winter trek for tourists. The newly formed lake in the upper part of the major tributary of the Zanskar River created a significant danger of a sudden release of water, washing out anyone who would be on the ice. Therefore the authorities prevented both tourists and locals from walking on the Chadar this winter. The flood did not come in winter, however. The dam broke with the spring ice melting and the sudden flood came on 7th May.

A newly built school below the Phukthal Gompa was washed away, most of the bridges between that monastery and the confluence of the Zanskar and Indus Rivers, including the road bridge on Lungnak (Tsarab Lingti) between Ichar and Raru as well as a newly built bridge on the lower Zanskar River linking the Kaya village in the Markha Valley with Chiling and Leh.

The local agencies claimed this spring that the routes would be fixed before the summer high-season. Indeed, routes were open but some of them followed alternative pathways, in places following opposite sides of rivers. As I visited Ladakh (including Zanskar) a few times this year, I had a chance to see the damage as well as the progress in fixing the routes and bridges. The description below should be helpful for anyone planning a trek in the next season.

My last visit to Zanskar was in late September and the information refers to that time.
• The route along the Tsarab River between Barandy Nala (Gian) and the abandoned village of Hormoche (Trek 2 in my guidebook) is fine to be trekked. The place was above the dam but a part of the trail was under the lake waters. The level of former lake water can be guessed en-route just before reaching Hormoche abandoned settlement. A part of the trail was damaged but there is a new pathway now and it leads as described in the book. However, anyone planning to trek on this route should bear in mind that this is an autumn option, usually not accessible earlier than beginning of September due to high water levels.
• All the way along Niri Chu (the Niri River) down to its confluence with Tsarab and the route along Tsarab to Yata and then down to Phukthal is fine. This way is a part of the Trek 2 and Trek 4 in the book. However, as these routes follow traverses of scree slopes in many places, the pathway might be destroyed at any time. High caution as underlined in the book is required.
• The bridge on Tsarab just below the Phuktal Monastery en-route between the gompa and Purni as well as the bridge on the Kargyak River just before its confluence with Tsarab in Purni had been washed away. New bridges have been built already (I saw the bridge in Phukthal but did not see the one in Purni) but the one below Phuktal (Trek 2 and 4 as well as side trip on Trek 3) is a simple and can be used by people only, not the horses.
• As per information from my Zanskari friends (although I did not tested this part of the route this year), it is fine to follow the route on the right side of the river between Phuktal and the Cha village. See Trek 2.
• According to Zanskari guides the bridge in Cha below the confluence of the Tsarab and Kargyak rivers has been rebuilt already but it can't be crossed by horses. There is no bridge below it down the valley as far as Raru! Trekking is possible on either side of the valley (I tested the route between the Enmu village and the Raru bridge on the right side of the river this September).
• The Pepula campsite does not exist (see Trek 2, 3 and 4 in the book). There are no camping or homestay options on the left side of the Lungnak (Tsarab Lingti) river between Changpa Tsetan and Raru!
• There is no bridge between Changpa Tsetan and Enmu (there used to be a simple, pedestrian bridge in this place). Dorzong bridge does not exist. There is no pedestrian or road bridge in Ichar. The road between the Enmu village and Pobre (the solitary house half way between Enmu and Dorzong on the right bank) which was built in recent years is damaged to a large extent.
• It is said that the Ichar road bridge would be rebuilt soon but I would be very surprised if I see it before the end of the next summer trekking season. If you reach Ichar on the right bank of the river there is no other option than to continue to the Raru bridge on Tsarab. It is a bit of a tough way on a high traverse but views are rewarding. It is also fine to walk on the left side of the river although the part of the road between the place where the Ichar road bridge was and the Raru village was washed during the flood - there is a footpath. (I did not walk on that side this season but I saw people walking on that side.)
• The pedestrian bridge over the Lungnak (Tsarab Lingti) just below its confluence with Raru Nala had been partially damaged but it have been rebuilt already. It is fine both for people and horses. As reported by the local people, the road bridge over Raru Nala was not effected.
• The bridge connecting the two banks of Lungnak in the Pibcha village was not seriously effected and can be crossed by people and animals. The next bridge (a road one) is in Pibiting near to Padum, just above the confluence of Lungnak (Tsarab Lingti) and Stod (Doda) which marks the beginning of the Zanskar River.
• The bridge over Zanskar which existed near to Zangla and Pishu does not exist (not checked personally). The pathway on the Pishu - Hanumer (part of Trek 5 and 6) had been effected in places but it has been fixed already so the Padum - Hanumer - Lingshed is fine and the way is clear.
• The bridge in Niearak was destroyed but I do not have any information whether it was rebuilt.
• The road bridge on the Zanskar River just below its confluence with Markha which was built in 2014 to link Chiling and Kaya villages was washed away in May. As this point marks an alternative beginning of the Markha Valley Trek (Route 8) we had to use rafts to start the trek in mid-May this year. As learned from the locals (not checked personally), there is a trolley (a kind of simple cable-car) crossing at this point at the moment as it used to be before 2014.
• The road bridge on Zanskar below Chiling as well as the bridge on Indus just before the confluence of the two rivers survived the flood so the road connecting Chiling with Leh is open. 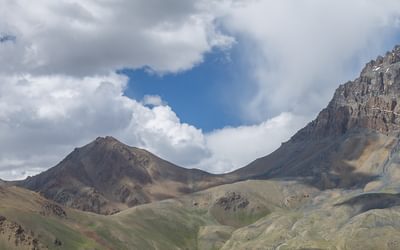 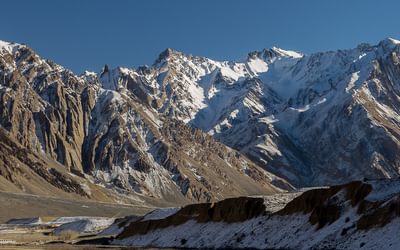 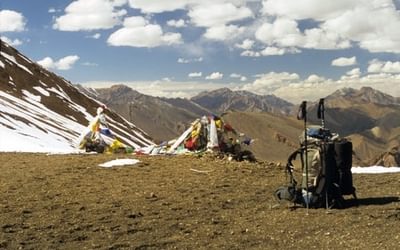 8 remote and challenging treks in Ladakh 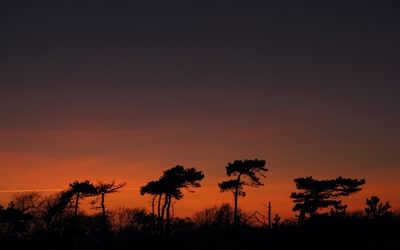