When Lesley, Jonathan and Maddy Williams updated Kev Reynolds’ Chamonix to Zermatt guide, it gave them an insight into the daily challenges faced by Cicerone’s guidebook writers.

It was pretty simple; all I had to do was to walk up the Mattertal Valley from St Niklaus to Zermatt and check everything was still as described in the guidebook, but just half an hour in, I met my first obstacle.

Kev’s Chamonix to Zermatt guide described ‘as you cross the Blattbach stream which pours from the right...’ Ahead of me was a rather intimidating pile of huge boulders, and a sign indicating that people could not continue along the minor road ahead. I was puzzled… I must have gone wrong somewhere, and surely the Swiss would have indicated an alternative route? I investigated the small wooded area above, stared down at the steep bank below, and considered crossing over the rubble and giant pipe that now appeared to be carrying the Blattbach Torrent. No, there was no way through. I thought maybe I had gone wrong somewhere earlier, so I retraced my steps, but on seeing yellow diamond markings on a wall I was reassured that I hadn’t made a mistake.

My next step was to explore a small track rising in the same direction, well above the stream and hydro works, but it ended at a fence in front of a small field and cluster of hay barns, so I retraced my route further back, and after half an hour exploring disappointing dead ends, closed gates and someone’s allotment, I finally found a path leading down to a footbridge over the Mattervista, and a further path up through woods to the main road a little to the north of Mattsand.

My new GPS track was clearly going to need to undergo some serious editing, but I still remained unconvinced that I had found the best route.

This episode was just a small insight into the challenges faced by our guidebook writers, as they research walks and treks throughout the world, documenting the best and most accurate route descriptions so that others may follow and enjoy a route that has been tried and tested.

The walker’s route from Chamonix to Zermatt is a popular trek that threads an accessible route crossing a series of high passes, while numerous variants provide both poor weather options and more prolonged, challenging alternatives. There is no ‘official’ route, as this is more of an idea that was first researched by Kev Reynolds with his trekking friend Alan Payne back in the late 1980s, and it has developed over many years since then. Our task was to walk and create GPX tracks for the route and all its variants, and to provide a full update of all the details in the guidebook.

To cover 27 variants within a two-week period it would take three of us – Jonathan and I, and our daughter Maddy. Every detail was checked – distance, height of key points, ascent and descent in each stage, accommodation facilities and contact details, as well as the accuracy of the route descriptions. With the use of GPS devices, we were able to make more accurate records, and between the three of us we returned with over 600 photographs from which to make a selection to update the guidebook.

The downside of all this was that it wasn’t so much of a trek together as a collection of experiences. By the end of the trip we realised that Jonathan and I had walked together on the same paths for a total of about two days and had stayed in the same accommodation for about half the time. Maddy and I fared a little better, clocking up about two and a half days together and many more nights in the same overnight accommodation.

On the subject of accommodation, the route traverses the northern valleys of the Pennine Alps, and on a number of occasions you stay in small villages in the valleys, rather than high in the mountains. This has the advantage of offering choices of places to stay, particularly in the high season, and opportunities to buy fresh food. There are, however, a few points where options are limited and booking early is a sound idea.

The weather plays an important part in the enjoyment of any trek, but when you’re working on updating a guide, you need good weather to describe the views and to take great photographs. For the most part the weather during our research in late August and early September was reasonable, and on many days it was warm with clear skies. However, on waking at Cabane du Mont Fort, overnight snow and ice made the challenges of both the Col Termin and Col de la Chaux routes all the more difficult. It was slippery, so we were slower than usual, and making an accurate GPX track when all the paint marks on the col de la Chaux were covered in snow wasn’t easy!

A violent thunderstorm one afternoon caught both Jonathan and I while we were still out on the mountainside – Jonathan ended up running down from Col de Sorebois to shelter at the cable car station; meanwhile, I was on the final 400m climb up to the Moiry hut, unable to find safe shelter. Maddy, who had taken another route and arrived earlier that afternoon, waited anxiously, then emerged from the hut in full wet weather gear to ensure my safe arrival.

Taking new photographs for the guidebook was a primary objective of the trip, but impossible when heavy rain and cloud obscured everything, so we had a couple of days grounded in Zinal doing ‘desk research’ while waiting for better conditions.

It had been hard work for nearly two weeks, with evenings taken up with notes and downloads, as well as the walking and detailed recording of facts and figures during the day. But we had some great rewards – fabulous sunsets, cloud inversions, dramatic stormy skies and glorious views of the Matterhorn. I had the unexpected thrill of meeting an Ibex when rounding a tight and exposed corner on the Col Termin path – it surprised us both, we were just a couple of metres from each other. Thankfully, he squeaked and darted uphill, but I will always remember my close encounter. Also worth mentioning is that we generally had some great food to fuel us!

Back in the UK, every word, every measurement, every photograph and every map was scrutinised, double checked and amended.

Jonathan and Kev Reynolds then spent a day together smoothing over final queries, and one month after our return we had delivered all the materials for the new edition to our production team. It had been a worthwhile and thorough process, and we had a renewed appreciation of the level of detail and research needed to make a great guidebook. 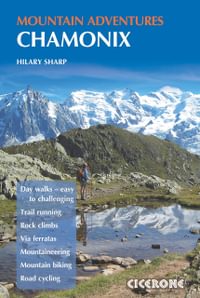 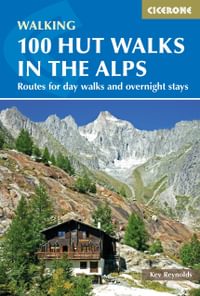 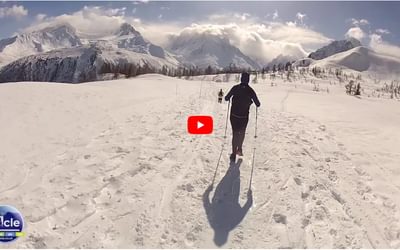 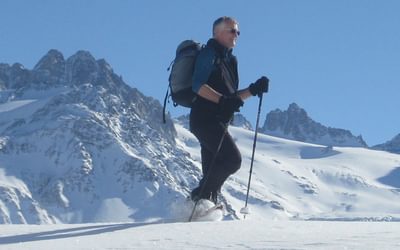 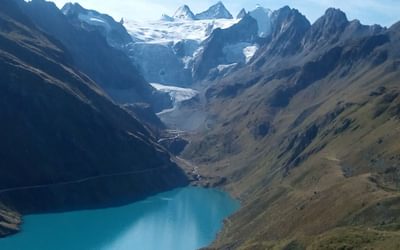 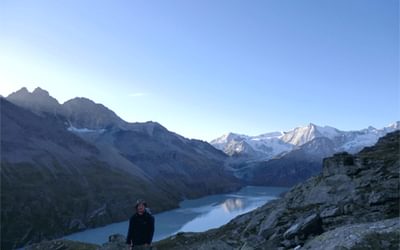 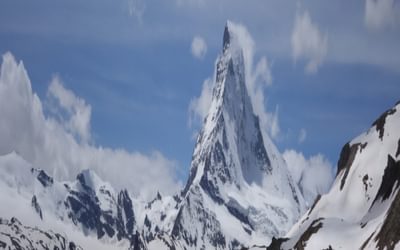