The Dordogne river flows through some of the most beautiful countryside in France, its banks lined with picturesque towns and cliff-top castles. Updating the walks for the new edition of Walking in the Dordogne enabled co-author Pamela Harris to rediscover this lovely area and the river that runs through its heart.

The Dordogne is one of the longest rivers in France, flowing almost 500km westwards from its source high in the mountains of the Massif Central to join the Garonne at Bordeaux and end in the Atlantic. At its start it is just a small stream, rushing swiftly through forests of oak and chestnut trees. The wood from these could be sold at a good price further downstream, and for generations the inhabitants of nearby villages owed their livelihood to this. Logs and tree-trunks were floated down as far as Argentat, where some of the wood was made into small, flat-bottomed boats called gabarrots or argentats. These were laden with the rest of the wood, together with small quantities of cheese, chestnuts and animal hides, to be transported onwards to Souillac, where the river widened and a small port had grown.

Here, many of the gabarrots were broken up for their wood, as larger boats could now be used. The most common of these were the flat-bottomed gabarres, which were made in almost every village bordering the river: records show that between 1850 and 1860 as many as 300 were built each year. Up to 20 metres long and five metres wide, they were capable of carrying a cargo of 30 tonnes, considerably more than the smaller gabarrots could hold. They were filled with large quantities of wood for the onward journey towards the coast, while medium-sized cargos were transported on boats called couraus.

After Souillac, the journey downstream was relatively straightforward, with swift currents to speed up the journey, and the final destination of the port of Libourne near Bordeaux could be reached in three or four days. However, there were still hazardous stretches, and boatmen had to be skilled navigators to negotiate their clumsy boats through the tricky shallows and fast-flowing rapids. The most notorious of these was the Saut de la Gratusse rapids at Lalinde, where the boatmen believed a monstrous dragon called la Coloubre gobbled up any boat that foundered. Special pilots were needed to guide the boats through these treacherous waters, and in 1840 a canal was built to circumvent them, with a dam to supply water to the canal.

Despite the fact that the river was navigable for only eight months of the year, it had been the main means of transport in the region from earliest times. Villages on the banks downstream from Souillac profited from this and a brisk river trade developed, with increasing numbers making a living from working on the river and boat-building, or even as merchants or innkeepers. Many villages had a port, the largest being at Bergerac where the first bridge across the river was built and where wealthy merchants owned large houses. This became the commercial centre for the whole area, with the wine trade from the surrounding vineyards becoming especially lucrative after the tax exemptions granted by Henry III of England. Much of the wood that arrived here was made into barrels for the locally produced wine, and by the end of the 19th century, 65% of the merchandise loaded at Bergerac was wine and only 28% wood, the remaining cargo being olive oil, flour, walnuts and chestnuts.

After Bergerac it was an easy journey as the river flowed more slowly through the flat alluvial plains to the port of Libourne, where the rest of the wood was unloaded. Most was made into more barrels to be filled with wine from the vineyards of Bordeaux, to join that of Bergerac, for export to England and Holland, and onwards to the colonies.

The gabarres then started on the return journey upstream, with a cargo consisting mainly of sea-salt, an important necessity to preserve food in the days before refrigeration, and a few luxuries like imported coffee, sugar and rum. The return was much slower as the boats were travelling against the current and had to be towed by teams of draught-oxen, working in relays. The journey was further complicated by the difficult terrain, which meant that the towpath could not run along the same side of the river all the way but had to be hacked out in stretches on whichever side was more suitable. The boats had to continually cross from side to side, and sometimes their cargo had to be unloaded and re-loaded. It was a slow process that could take up to three weeks, although records show that one consignment of salt reached Souillac in an astonishing five days. Only small quantities of necessities like salt were transported above Souillac, bags being loaded onto mules to complete the journey by land.

Undeniably, the most scenic stretch of the river is the central section between Souillac and Lalinde, where it flows between high cliffs, forcing the waters into a series of dramatic horseshoe meanders called cingles. The Cingle de Montfort comes first, and then the Cingle de Limeuil, followed by the largest of all, the Cingle de Trémolat. Limeuil is where the Vézère river joins the Dordogne, in a strategic location for trade from both rivers. A small port soon grew at the foot of a hill, and many of the inhabitants made their living from the river. These included women, and you can still see the Maison de tolérance, where local girls entertained homesick boatmen. Now, Limeuil is a popular tourist destination, the picturesque houses straggling up the hill from the lower gateway to reach the Panoramic Gardens at the top, from where there is lovely view down onto the confluence of the two rivers.

It was this central stretch of the river that formed the border between English and French lands once Aquitaine came under English sway in 1152, at the marriage of Henry II and the beautiful Eleanor. Castles were built along the banks, many of them in strategic positions on high rocky cliffs, with extended views over the surrounding countryside. During the Hundred Years’ War these became even more important and were fought over bitterly. Many, like Beynac, changed hands frequently, whereas Castelnau, on the opposite bank, remained in the hands of the English. Fortified towns grew up around the castles, the best known being Beynac, la Roque-Gageac and Domme. They are all in breathtakingly beautiful sites, their lovely old houses set off against the blue of the river and the sky. Once the wars were over, Renaissance-style châteaux were built, with ornamental towers and beautiful gardens, les Milandes and Marqueyssac being two of the most visited today.

Now all you see on the river are swans, ducks and pleasure craft, for the advent of the railways, enabling heavy goods to be transported more quickly and easily, brought a halt to the busy river trade. However, things have come full circle, for now it is the railways that are in decline, and gabarres are being built once again – but this time purely for pleasure, to take tourists on river cruises from the small towns of la Roque-Gageac and Beynac.

This guidebook describes 35 walking routes in France's beautiful Dordogne region, based around Sarlat and Souillac regions (Perigord Noir) and Bergerac (Perigord Poupre). The walks range from short walks to mountain circuits, and explore the spectacular gorges, chateaux and medieval villages of the region. 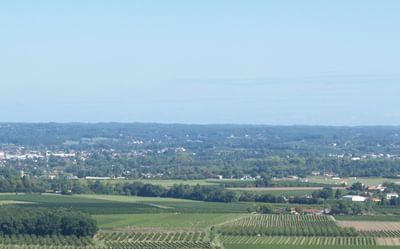 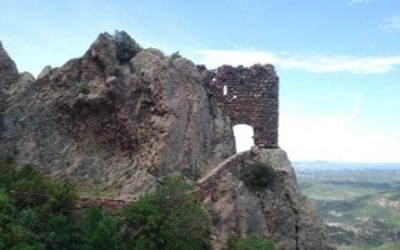 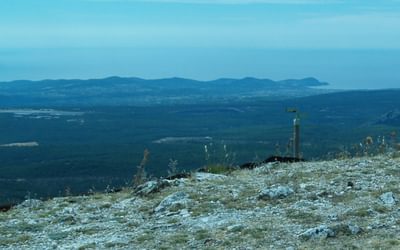 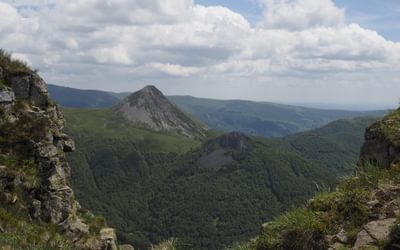 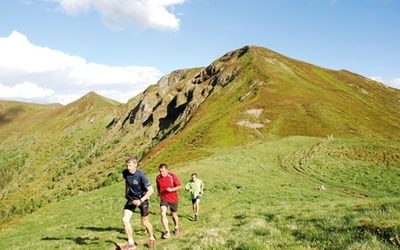