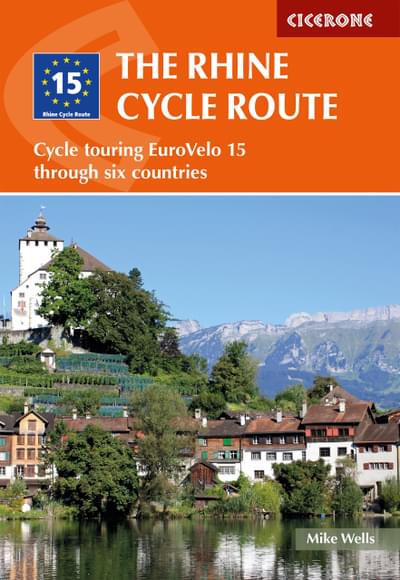 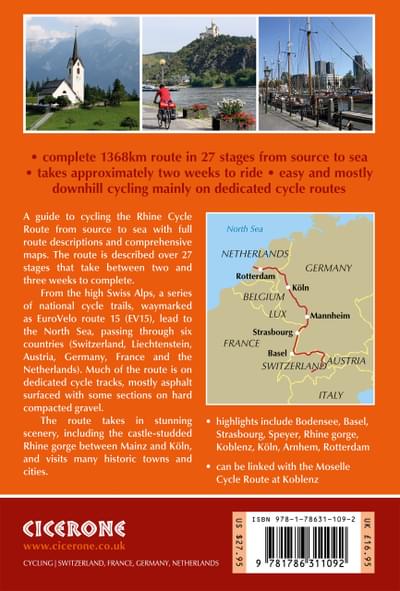 Guidebook to cycling the River Rhine from source to sea, through Switzerland, Germany, France and the Netherlands. The 1368km route from the summit of Oberalppass to the Hook of Holland is split into 27 stages, mostly following well-surfaced cycle tracks. Includes information on facilities, useful contacts and a language glossary.

Except for the first stage in the Swiss Alps, where snow lingers until May, the route is best ridden between April and October

The route follows a river from source to sea with a prevailing downhill gradient. There are a few gentle ascents, all within the abilities of leisure cyclists. Stamina is the key requirement as the route takes two to three weeks to complete. The ride is best undertaken on trail, touring or hybrid bikes. 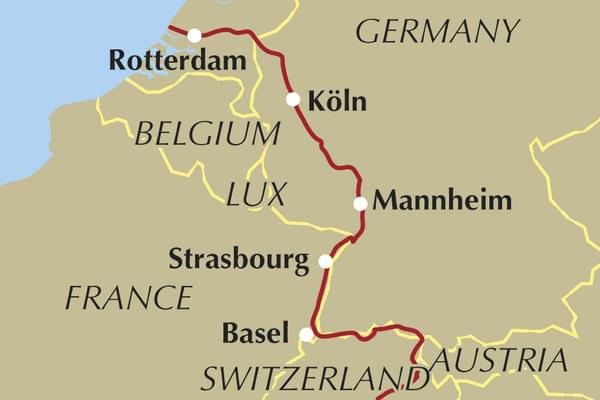 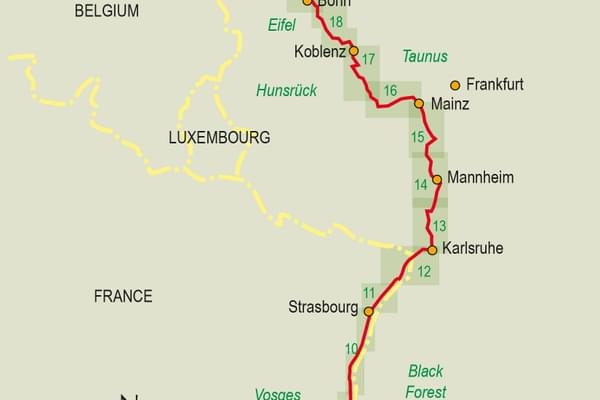 Overview
This comprehensive guidebook to EuroVelo route 15 offers a detailed stage-by-stage description of the 1368km route along the Rhine, one of Europe's great rivers, passing through six countries on its way from Switzerland to the North Sea. The cycling is easy, downhill and along dedicated cycle lanes, the countries visited are very cycle-friendly and the waymarking is excellent. The whole trip can be completed in two weeks by a fit cyclist.

The guide includes plenty of information to help you plan your trip, with advice on travel, accommodation and facilities. The full route is presented in 27 stages of 32-68km, with step-by-step route description, 1:100,000 mapping and notes on local points of interest. A facilities table, glossary and list of useful contacts can be found in the appendices.

Starting in the Swiss Alps with high mountains, deep glacial valleys and gorges, the route soon reaches Europe's third largest lake, the Bodensee, and its greatest mainland waterfall. After Basel, the Rhine becomes a broad river, now the world's busiest river trading artery. The middle Rhine, between Bingen and Koblenz, forces its way through the narrow rocky Rhine gorge, lined by romantic castles perched above Germany's finest vineyards. Finally, the river passes through low-lying Holland, famed for its many flood dykes and windmills.
Table of Contents

Widening of Fussach bridge over the Rhine between Höchst and Hard has blocked the cycle route where it formerly passed under the bridge. Work started in autumn 2021 and will continue through 2022. Towards the bottom of p71, 150m before cycle track drops down L off flood dyke to pass under Fussach bridge, turn L then R at T-junction and R again onto bridge, re-joining original route crossing river using cycle track L. As bridge work progresses, it is likely that construction of new approach roads and slip roads on both sides of the Rhine will lead to further route changes. Look out for local signage.

Fussach bridge is where the alternative routes around Lake Constance divide. To follow the southern route around the lake, do not cross the bridge; rather go straight ahead across bridge approach road into Dorfstrasse (sp Fussach) and follow this heading west through village.

Stage 5 (p80) The railway crossing referred to in the third line has been replaced by a railway underbridge with consequent re-modelling of nearby roads. After passing disused railway goods depot R, bear L (Bregenzer Strasse) then go ahead L at roundabout (second exit) and cross bridge to reach another roundabout on Lindau island.

Stage 16 (p186) Construction of a new motorway bridge over the Rhine has caused a long-term cycle route diversion between Biebrich and Schierstein. In the first line, do not turn L into the park, rather turn R (Rheinparkstrasse) opposite canoe club. At end, turn L onto Rheingaustrasse, a busy main road with cycle track R. Pass under motorway bridge, then turn L at traffic lights (Hafenweg). Turn R at first crossroads (still Hafenweg) to re-join original route passing Schierstein marina L.

Stage 20 (p224) Another new motorway bridge over the river has caused a long-term diversion at Merkenich. Do not fork R beside house 220b, rather continue ahead under motorway bridge and turn R (Schlettstadter Strasse) beside house 248b. At end, turn L, re-joining original route through fields and out of Köln.

Stage 23 (p248) Construction of new flood dykes and sluices has altered the route at Griethausen. While this work is underway it is necessary to divert through the middle of Griethausen. Do not turn R onto asphalt track beside course of Alt Rhein. Rather continue ahead for 1km to reach roundabout and turn R (Postdeich, first exit). Follow this winding through Griethausen, then at end of village where road passes through gap in flood dyke, fork L up onto dyke to re-join original route.

When the work has been completed, a new cycle track will fork R from a point about 500m before the bridge over the Alt Rhein along a newly constructed flood dyke crossing the new Alt Rhein sluices and then bearing R to join the original route along the old flood dyke passing Griethausen below L.

Stage 27 (p279) Between Koggehaven and Maassluis, construction work for the new Maasdelta road tunnel has caused long term diversion of the cycle route. The diversion route is described in the guide and shown on the maps. When the work has been completed, it is expected that the original cycle route alongside the river Maas will be re-instated.

Stage 27 (p282) Relocation of Hoek van Holland station and re-modelling of the roads serving both the station and ferry port are causing short-term diversions. Follow the signs. 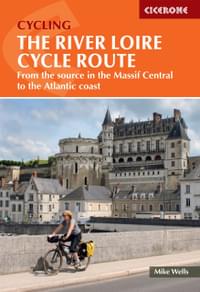 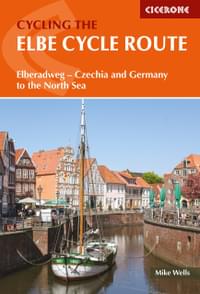 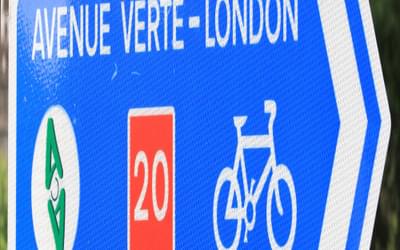 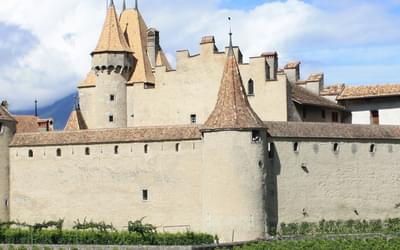 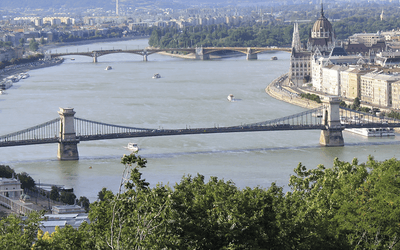 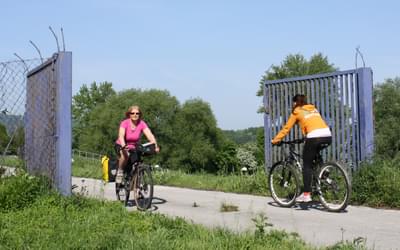 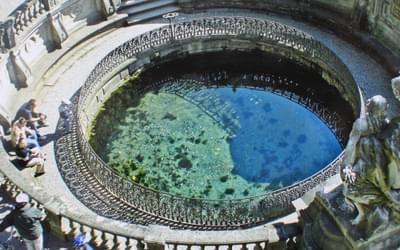 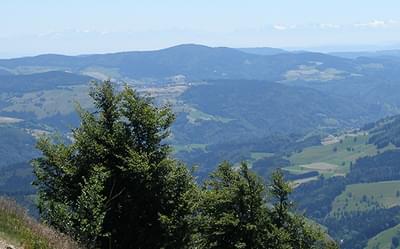