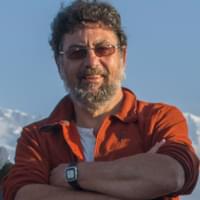 Robin Pritchard treks to Khiraule in the South Khumbu region of Nepal to visit the school and clinic his local village residents have fundraised to build, maintain and staff.

4x4 journey into the mountains

Our arrival in Nepal has coincided with the late finish of the rainy season which has run into the middle of October. We have had to change our start point to Phaplu as the road to Budidanda is closed due to a landslip. There is an airport at Phaplu but the poor weather has cancelled the flights to both here and Lukla. We opt for two 4x4s and set off on the ten hour drive from Kathmandu. The latter part of the road is in poor condition as it hairpins up from the valley floor. The wreck of last weeks fatal bus crash can be seen below. We have to walk a couple of short sections while the cars struggle in the mud. Fording a river presents us with a few additional moments of excitement. We reach Phaplu in one piece for which I have to congratulate the skill of the drivers. Unbeknown to us one of our rucksacks had fallen from the roof rack. Luckily the following car found it and returned it to us, somewhat battered and dirty but intact!

After our first night in a local lodge the early morning brings clear views of the distant Mera range to the north west. Our route takes us across the valley contours which sets the pattern for the next few days. It is either up or down for long stretches with heart-stopping suspension bridge crossings in between. I have already broken my glasses beyond repair on day one of our 16 day trek and am down to my only spare pair. I am therefore reluctant to look down at the raging white water below as we cross the bridges for fear my glasses may slip or be blown off. It would be trek over for myopic me (note to self: bring two spare pairs on long walks in the future). The bridges are generally in much better condition than when I first came to Nepal 29 years ago, but can still provide moments of anxiety where gaps have appeared and bolts have worked loose. We have one particularly scary moment when six heavily laden dzos (yak-cow hybrids) follow us across one bridge causing it to sway violently.

It is getting dark when we reach Shivatar. We are camping tonight on a disused helipad just outside the village but return in the morning to this charming little settlement which has a weekly market, a school, a small hospital, a dentist and a regional police station. It is the only settlement of any size that we will see in the nine day trek between Phaplu and Namche Bazaar. Even so there is no road here with most things being brought in by mule. The painted houses with balconies overhanging the street give it a strong provincial identity. Children collect water from the communal well, while tailors sit looking out on to the street from behind their sewing machines. Our arrival overlaps with the Hindu festival of Dussehra. Many people are dressed in their best and happy to talk and be photographed. When we arrived last night we passed a group of highly excited children playing on a small wooden Ferris wheel erected especially for the celebrations.

We visit the small cottage hospital before setting off late in the morning. It is a relentless uphill climb to Khiraule through forest. The paths are narrow and still slippery from recent rain. Leeches become a real problem once we hit the forested area – I count seven on my boots at one time despite flicking them off constantly. Our porters have rubbed some local remedy over our boots but it seems to have little effect. One leech gets a hold on my ankle during a stop. I only become aware when someone notices that my sock has turned blood red. Several of my friends are similarly affected, although the prize has to go to Enda who somehow gets one in her unexposed belly button!

We stop for chai at an isolated house on the path. Our guide Lhakpa is an acquaintance of the owner so drops in for a chat. The house is of traditional build with a timber frame, mud walls and a thatched roof with few concessions to the 21st century. This year’s maize crop is drying on a large frame on one side of the courtyard. Chickens run free and water buffalo gaze on from an adjacent cattle shed. Three generations of the women of the house come out to have a look at us. Tourists are a rarity here so we are something of a novelty. I pluck up the courage to ask if I may photograph them and the ice is broken.

Finally we emerge from the steep climb on to a flat area to reach Khiraule, our main reason for making this trek. Our guide Lhakpa is originally from Khiraule, but he now lives near us in England. Our first stop is the family home where we are welcomed in by his elderly father. Lhakpa’s two sisters bring us the customary salty Sherpa tea and boiled potatoes in their skins served with a spicy garlic dip. We sit and admire the interior of a traditional Sherpa homestead. This is a single room with sleeping areas, tables and chairs and an area for religious worship. It takes a while to adjust to the darkness. Shelves against one wall are filled with cooking and farming utensils as well as bedding, clothes and personal possessions.

We have arrived at an auspicious time. Not only is it Dussehra, but it is also the two year anniversary of the death of Lhakpa’s mother. A Puja (prayer session) is being held in her memory at the monastery. The village is quite spread out and it is a fair climb up to the monastery for the Puja. The monastery is set on a small knoll encircled by a mani wall. We stop momentarily to pick moss from the mani stones, an act of devotion Lhakpa has performed since he was a child. The Puja goes on for much of the day, but we are forgiven for only spending a short time at the ceremony: there is only so much cross-legged sitting that the western frame can take! We sit to one side whilst Lhakpa and his sisters make offerings. Six monks of varying ages sit in rows of three facing each other. We sit along the sides on low wooden benches as the monks chant and play a selection of wind and percussion instruments. Incense sticks burn on the shrine below the statue of the Buddha.

We continue our 16 day trek over the next few days and will soon join the more well trodden path from Lukla, via Phakding up to Namche Bazaar, Tengboche Monastery and beyond as the weather improves. The rain has held back the flights to and from Lukla for some days. From Surke we can see the delayed flights now coming in and out at five or ten minute intervals. This makes for a lot of walkers on the trail for the next few days. Most are heading up towards Everest Base Camp. From the Everest View Hotel north of Namche Bazaar we do a loop via Khumjung and Phorste which takes us off the main drag and provides stunning views of Ama Dablam. Now finished trekking, we fly back to Kathmandu from the world famous Tenzing–Hillary Airport at Lukla. 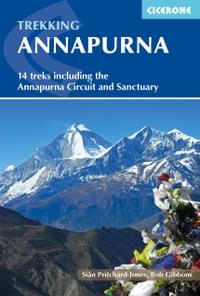 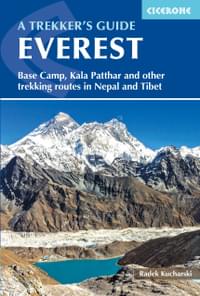 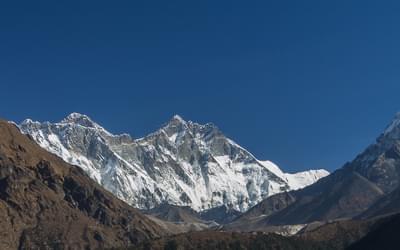 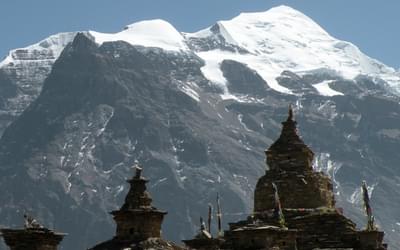 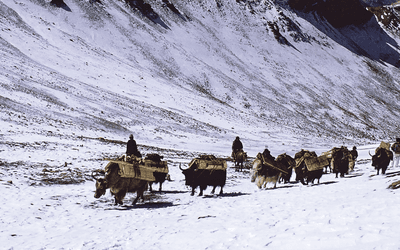 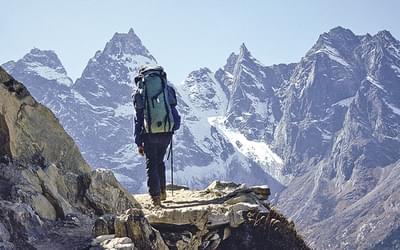 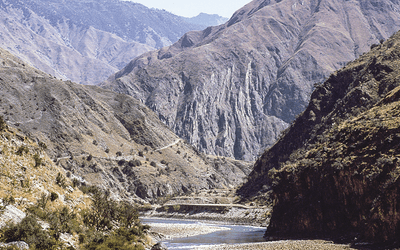 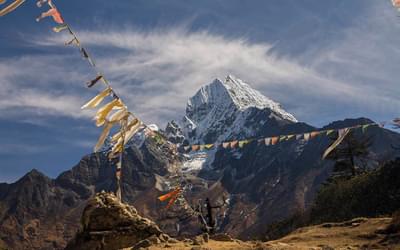