Traditionally, when walking the Tour du Mont Blanc (TMB) you start from Les Houches and head south and anti-clockwise before turning and heading north through Italy. This is the route taken by thousands of trekkers every year as they take in one of the world’s great walks, around the monarch of the alps.

But why this way round? Trekkers have always gone both ways, but the clockwise route seems to be neglected nowadays.

Is this justified? Should you swim against the tide? Is it better, worse or just different? What about the views, the accommodation? Why can’t we be different?

The route is written into the consciousness of the trekkers throughout the world – over the col to Les Contamines, the big climb to Croix de la Bonhomme, Chapieux to Les Mottets then over the Col de la Seigne into Italy, the three days walk under the hugely impressive south faces of Monte Bianco and the Grandes Jorasses, the Grand Col Ferret into Switzerland And delightful Champex, the choice of the Bovine or Fenêtre, the Col de la Balme and the Grand Balcon Nord before the long drop to Les Houches and a satisfying beer and celebratory meal.

Cicerone’s TMB guidebook has described both ways round since 2005 when, after a series of trekkers asked for the 'wrong way', we decided to put both in the book. Author Kev Reynolds has checked both many times, but the new edition planned for 2020 seemed a good time for the publisher to check it over again as well. And having done the route several times, now was the time to try it the other way.

I was fighting fit after several weeks of walking and writing in Switzerland (for the new Zermatt and Saas-Fee guide by Jonathan and Lesley Williams, delayed until 2021). In truth, I was probably past my peak fitness with hundreds, likely thousands of kilometres and tens of thousands of metres of up and down in the previous couple of months.

Saying bonjour to the UTMB runners

Clockwise, the traditional start point is Champex reached by train and bus from Martigny. Clearly a circular loop can be joined at any point, but if coming from anywhere north, Champex makes sense as an access point. This small resort is set around a charming lake under a backdrop of big peaks, The Pointe d’Orny just above, the Grand Combin in the distance.

On the day I started, the UTMB race was passing through. As I set off, the Spanish runner and eventual winner Pau Capell was heading through Champex, some 20 minutes ahead of his nearest rival. He had been running for 14 hours by then and looked fresh as a daisy as the cameraman (on a bike) tried to keep up with him. UTMB runners were a big feature of the day, and by the end I must have passed a couple of hundred.

The first dozen were very intense, looking inwards for mental and physical resources to see them through. The first Brit was about eighth and managed a cheerful greeting. A new game emerged; could I judge who would want a cheerful 'bonjour', who didn’t want to engage and who needed a supportive 'courage'? I would like to think I got quite good at choosing, but who can say.

Down the steep woods I had only ever climbed up before, and then the long pastoral walk up the valley, cross to the left bank of the river and through woods, under the Anemone slab, through friendly La Fouly and the short stretch to the hamlet of Ferret. All the time greeting runners, checking times and distances, taking photos in the crystal-clear air of the day.

But I had my instructions too, check this, check that. All part of a guidebook publisher’s life. The next day was to take the variant section to the farm at La Peule, high above the normal track, the route taken by yesterday’s runners had turned into a bog by the overnight storm that led to a series of helicopter rescues. Then the long, steady climb to the Grand Col Ferret and meeting the first walkers of the day climbing from the Italian side. A group of young Israelis, carrying tents and big packs. Well done them.

It was cold on the col, and steep down the Italian side. There was something wrong with my leg, on the outside of the knee. Probably I had rushed around too much exploring above Ferret the previous evening, or sat awkwardly on it to write. Likely helped by cumulative ups and downs in the previous weeks. It hurt like hell. No solution but to run it off, I am British, after all. And analgesics.

The drop to Val Ferret is now much eroded, perhaps one of the harder downhills. Sharp rocks poked out of the shale, the knee hurt, I wobbled. Not great. Then Elena, the magnificent refugio at the foot of the col. But I was too early for lunch, so onwards. Down to the valley and then the climb to Rifugio Bonatti, directly facing the Grandes Jorasses: a great rifugio in a magnificent setting. It was full, but seemed to comfortably fit everyone in.

Big differences between clockwise and anti-clockwise

Next day along the 'new' route to Courmayeur, with coffee at the Bertone refuge after a couple of hours, then the long steep drop in to Courmayeur. The leg was doing a bit better, the ibuprofen and paracetamol were making a difference. A good explore around, a trip to the bookshop to tell them the new guide is coming (and a new guide on the Alta Via No 1 – the Giants Trail – route above the Val D’Aosta). Then the nasty bit. My instructions were to take the route around the north side of Mont Chétif, most of which is along a road. A steep road, passing the entrance to the Mont Blanc tunnel, then facing the Brenva and Peuterey side of Monte Bianco, and then Refugio Monte Bianco.

Above the Vallée Blanche alongside the ridges of Mont Blanc

Off early the next morning, was it only day four? A steep climb through woods to the wonderfully sited Maison Veille Refugio and the long walk above the Vallée Blanche with my face continually turned towards the searing ridges, glaciers and gullies of Mont Blanc. A drop down then a short climb to Elisabetta for lunch. An excellentetarte myrtille, then over the Col de la Seigne and into France and the Refuge des Mottets, a redeveloped dairy farm, with ample facilities, plenty of space, good company and good food.

My next day was silly. My own fault and the refuges seemingly full, plus a desire to spend the following night at the Bellachat refuge facing Mont Blanc’s north face meant I gave myself a 32km day with who knows how much up and down (I do, I measured it). Down to Chapieux, up the Bonhomme, down to Les Contamines, down the valley and up to the hamlet of Bionnassay. This was two normal stages! I arrived at the Auberge at 6:45 and found I had booked it twice but after a long discussion we came to a solution that seemed to satisfy us all. Dinner was a sweet, sweet meal.

Next day started murky and got worse. Over the Col de Voza, down to Les Houches to restock with analgesics. Then started the long climb to Bellachat. It was OK past the statute and the zoo but then the storm started. It wasn’t thundering just then, so through the cabled section and onwards and upwards in the rain to the refuge, full of very wet people. Facilities are as limited as the view is vast – one tap and the whole of Mont Blanc. Needless to say, I saw absolutely nothing through the cloud. So much for planning.

Onwards the next day and over the Brévent, still with no view, the tricky bit down to the Col du Brévent, down to Planpraz and across to Flegère. My instructions were to go up to Lac Blanc but the trail was closed. Plan B was to head to the Col des Montets, past the beautiful Cheserys lakes. Still no view. The drop to the col was hard going, the succession of long days taking a toll but the trek was nearly over. From the col down past the splendid Tré le Champ refuge and across to the Montroc railway station and the slow train back to Martigny. My trip was done.

The plan was to stop here. Lesley and I had walked the T-L-C/Argentière to Trient to Champex sections the previous year while checking out the Chamonix to Zermatt route. 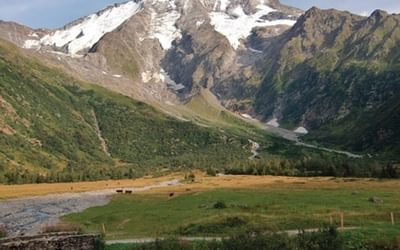 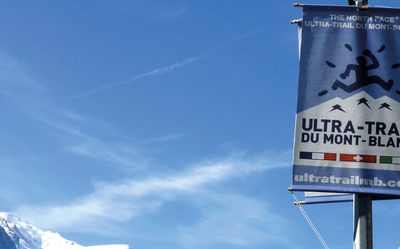 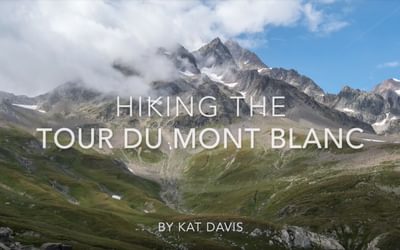 Hiking the Tour of Mont Blanc with my dad 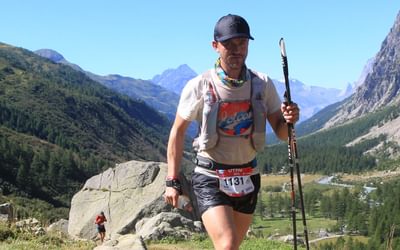 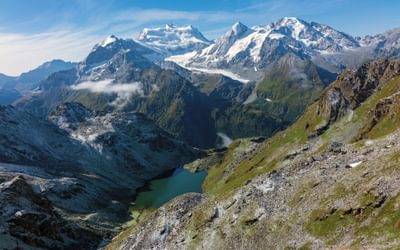