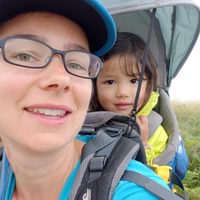 Jen Lumanlan travelled from the USA and did the Tour of Mont Blanc with her daughter when Carys was only eight weeks old. This article is the third of three in which she shares her experiences of taking an infant trekking. Here she describes her experiences out on the trail.

In excess of 10,000 people embark on the Tour de Mont Blanc (TMB) each year, according to venerable Cicerone author Kev Reynolds. I’m aware of one 11 month old who has done the trip, but to my knowledge my daughter Carys might have been the youngest to complete 8½ stages at the ripe old age of eight weeks.

I’m not even sure I can fully describe the sense of accomplishment I felt standing at the top of the Brevent lift after ten days of hiking with Carys on my front. A lot of planning and preparation went into our TMB hike, along with a certain willingness to go with the flow.

My friend Sarah and I had been thinking about this trek for months and while we were as prepared, both physically and mentally, as we could be, Carys was the wild card – would she tolerate hiking for six or more hours a day? Would she get nappy rash or altitude sickness or would she keep people up all night in the huts? Would I keep producing enough milk or get mastitis or achy joints from all the Relaxin still in my system?

After the trip friends with kids asked me what the trip – not the fun version I described in a photo book I made for Carys – was really like. The truth is that it was amazing.

We didn’t get off to an entirely auspicious start: the night before we started we had Indian food which apparently didn’t agree with Carys, who projectile vomited on the floor in the bedroom of our Airbnb room and again in our kind host’s car as we were dropped off at the Bellevue lift. I had discovered and appreciated Cicerone author Hilary Sharp’s philosophy to never walk past an operating lift before my Haute Route trip the previous year, so I didn’t feel bad at all taking the lift so that we could make the most of the higher variante route.

Carys started crying 20 minutes into the hike and I wondered if we were completely crazy for even attempting this. We stopped on the side of the trail to nurse under a draped swaddle cloth, and a passing (male) hiker took our picture to show his wife that Real Women Do Hike – which made me feel better. At the top of Col de Tricot we realized we’d left our cheese in the fridge at the house, so we snacked on crackers and apples while Carys nursed again. There were sheep all around us and Carys would break her suction whenever they baaaed. We resupplied with cheese at Refuge de Miage and took an unofficial and very steep route down to Les Contamines, dealing with our first on-trail nappy blowout. We were grateful (not for the last time) for the onesies I’d made out of wicking fabric, which were easy to wash and dry. The hostess at Chalet CAF du Contamines was lovely and gave us a dorm room to ourselves, so Carys and I slept on one bottom double bunk and Sarah took the other.

Our second day was scheduled to be a real baptism of fire, so we felt no compunction about taking the bus to Notre Dame de la Gorge and starting the hike from there. It was a long, hard, 10 hour hike to Refuge des Mottets punctuated by three cols, occasional showers and two ibex sightings. We were getting into a rhythm with Carys, who would sleep for a couple of hours at a stretch, then whenever she woke we would stop to nurse and eat. A nappy change would be followed by a bit of fussiness as we packed up to get moving again, and almost inevitably she peed five minutes later and needed another change (she’s hated wet nappies since she was born). Once clean and dry she would fall asleep and the cycle would begin again.

The hostess at Mottets showed us to our spots in the corner of a crowded dorm. Luckily my high school French managed to negotiate us a quieter room, which turned out to be a 50-bed cow barn opened especially for us for us. This we quite efficiently filled with our stuff. Torrential rain was forecast – and arrived – the next day, so it was great that we had space to spread out and not disturb others. Carys was fine snuggled up close to me while we were hiking but we knew we wouldn’t be able to keep her warm and dry during nursing breaks in the rain, so we were forced to stay put. Our reward for waiting out the downpour when everyone else moved on was a crystal clear (if cold) crossing of Col de la Seigne.

It was a glorious hike, and when we heard from trekkers we caught up with about horizontal rain at the col and stream turned to rivers, we knew we’d made the right decision.

My favourite part of the trip was the view from Tete de la Tronche, a long ridge south of Mont Blanc after leaving Rifugio Bonatti. The pastureland made for a lovely foreground, and the sheep were agreeable subjects – I got some of my favourite photos on that morning. We didn’t stop for long because Carys was asleep and we had a rule that we only stopped when she woke up, or it would have taken us forever to get anywhere. Later that day we caught up with the Ultra Trail du Mont Blanc runners, as the various races had started over the last couple of days. Most of them looked absolutely shattered and we were hiking as fast as many of them were ‘running.’

We met Americans Marc and Jenny at the Rifugio Elena. They were one their honeymoon and Jenny was hiking in order to get time on a beach in Greece afterwards. One of the first questions they asked Sarah when I wasn’t around was ‘So, are you sick of the kid yet?’ (Sarah assures me that her answer was ‘no’). Many people were curious about what was in the front pack, and shocked to find it was a baby. One Irish lady insinuated that I was taking a monumental risk by hiking with Carys, and while I might never have forgiven myself if anything had happened to her I think the overall risk of me falling while carrying her down the stairs at home is rather greater. In general people were excited and supportive, especially a (female) tour guide who we met several times on our first day and who thought we were just awesome, which provided a much-needed dose of confidence. A couple who saw us at Rifugio Bonatti, and who had ridden the Bellevue lift with us, also wanted to tell us how impressed they were.

Lacs les Chesereys were just as amazing as I’d remembered from the previous year’s Haute Route trip, and I even remembered the girl working at the Lac Blanc hut where we stopped for lunch (although she didn’t remember me). As we made the last short push of the day up to the hut at La Flégère a group of middle-aged Chinese hikers whom we’d seen several times before shouted ‘Baby Mama!’ and started clapping from their perch around the fire pit. La Flégère actually ended up being the only place where we had to sleep in a dorm room; I was quite worried about it and once we laid out Carys’ sleep sack and diapers on her bed at one end of the dorm the other end started filling up quickly. We tucked blankets under the top mattress to act as sound-proofing curtains around the lower one, and she slept amazingly well – I was awake for two hours anticipating her mid-night feed, but she went straight back to sleep again afterwards and other people woke her up in the morning (not vice versa).

Sarah wanted to spend the last day exploring Chamonix so she rode the lift down while Carys and I hiked on to the top of the Brevent lift (we had considered hiking back down to Les Houches but apparently it’s a knee-grinder and, of course, the views get worse as you descend). There were a couple of short ladders but nothing too difficult, although it was a bit disappointing that the trail to the top was a track that had been bulldozed for lift construction.

I took deep breaths of the cool air at the summit and couldn’t quite believe it was all over. I really feel like we pulled off quite a feat, and I didn’t struggle with any of the things I’d worried about (including mastitis, milk supply, aching joints, lack of sleep and keeping other people awake).

I think it’s possible that Carys is the youngest person to do most of the TMB. She won’t remember any of it, but hopefully she’ll appreciate the photo book when she’s old enough. The TMB ended up being the first of several such trips we’ve done since, so I’m hoping I have begun to instil in her a love of the outdoors and a desire to explore new places. 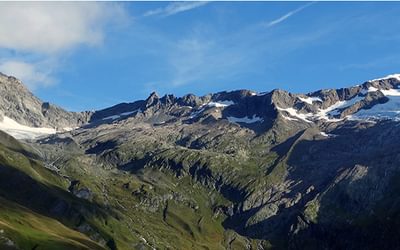 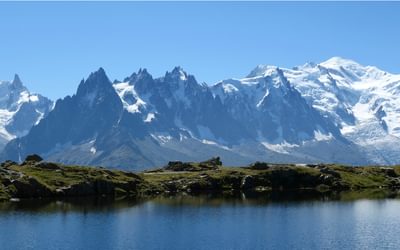 Trekking with an infant 2: Before you go 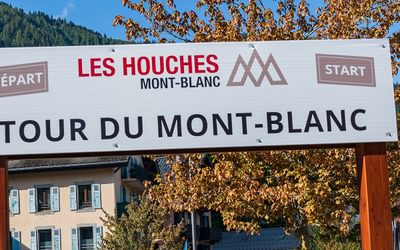