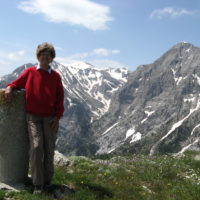 Pamela Harris enjoys some walking on the Aeolian Islands, much aided by Gillian Price's guidebook to Walking in Sicily. She has shared her memories, and a little history, with us in this blog post.

Walking on the Aeolian Islands, or at least two of them

Ancient home of Aeolus, the Greek god of the winds who helped Odysseus, the Aeolian Islands lie in the Tyrrhenian Sea off the north coast of Sicily. There are seven in total, the most well-known being the active volcano of Stromboli, but on this, our first visit, we decided to stay on only two: Lipari, the largest, and Panarea, the smallest.

We set out from the port of Milazzo in one of the frequent hydrofoils, calling first at the island of Vulcano where Vulcan, the Roman god of fire and metal-working, reputedly had his forge. The volcano is now dormant and the crater safe to walk to, although the ever-present smell of sulphur testifies that it is not totally inactive. The island’s northern promontory of Vulcanello almost touches Lipari, and the hydrofoil soon landed at Marina Lunga, the main port of Lipari town.

Lipari has a long history going back to Neolithic times, when early settlers discovered that the volcanic black obsidian found on the island gave a sharper cutting edge than flint. This provided a lucrative trade all over the Mediterranean, and a citadel was constructed on the heights above the harbour. The Greeks and subsequent invaders strengthened its walls, and we walked on the paved way round these ramparts to see the display of Greek and Roman sarcophagi in a park overlooking the harbour and rooftops of the lower town. Steps led up to the ornately decorated baroque cathedral dedicated to San Bartolomeo, the patron saint of Lipari, and the adjoining cloisters built by the Normans.

Well worth a visit is the Aeolian Museum, housed in several buildings surrounding the cathedral, which contains prehistoric and classical finds from all the islands in the group, including a large collection of Greek theatrical masks, and a section on the exploitation of obsidian.

After exploring the citadel we set off on our walk to the southern headland, past the old fishing harbour of Marina Corta and the church of San Giuseppe. From here a narrow road, lined by walls covered with straggling broom and cistus, led up to Capistello, from where we got a clear view of Vulcano and its vast crater just across the straits.

Directly below were rocky cliffs and pinnacles rising out of the sea, and as we neared the headland overlooking Punta della Crapazza, the vegetation became denser, almost covering the narrow path. But there was a paved road further on leading to some very upmarket modern villas, all very secluded and with spectacular views – perhaps the retreat of those who had made their fortune with Mafia money!

The path wound up to its highest point at the Osservatorio Geofisico, and from here there was a wonderful panorama of the islands to the north-west: Salina with its twin volcanic peaks, and Filicudi and Alicudi furthest away.

For us this was the ultimate viewpoint, and we wound our way downhill, back to the harbour with its cafés and ice-cream stands, a fitting end to a glorious afternoon’s walking.

Little did we know that even better awaited us, for the tiny island of Panarea, our next destination, was the closest I have ever been to paradise on earth. It is just a short ride from Lipari, but most of our fellow-passengers stayed on the hydrofoil to go to Stromboli, unaware of what they were missing. As we docked at the small port of San Pietro, we could see fishing boats drawn up on the beach and the Da Luca family’s small red buggy come to meet us.

We were driven up lanes too narrow for cars, past white-painted houses covered with colourful bougainvillea and oleander, to their house at the foot of the mountain. From the terrace in their garden we looked down on the sparkling blue sea and rocky islets of Basiluzzo and Dattilo – paradise indeed. This was where we had our breakfast of delicious home-made cakes and freshly squeezed orange juice each morning, with a welcome cup of tea on our arrival and a glass of the local sweet malvasia wine on the eve of our departure. Luca and his mother Angela were the perfect hosts, treating us as part of the family and appreciative of the fact that I was able to speak to them in Italian, albeit not very fluently.

It was Luca who gave us a map of the island and directed us to the start of the walk around it and up to its highest point, Punta del Corvo - at 421m perhaps not high, although we were starting from sea-level. It is possible to do the walk in three hours, but with continual stops to enjoy the views, we took considerably longer. From their garden we turned north, and were immediately greeted by the cone of Stromboli rising out of the sea ahead, a plume of smoke regularly erupting from a vent in its side. We started up a narrow paved lane, past the houses and small church of Ditella, with the sparkling blue sea always on our right and Stromboli always ahead. A steep path on the right led down to an idyllic small beach below us, where a passionate Italian lover had outlined Ti amo Cate in pebbles on the sand.

After about 30 minutes there was a signpost pointing up left to the craggy peak of Punta del Corvo above, and we turned off the paved lane onto a narrow path which wound steeply upwards, through banks of flowering bushes – bright yellow broom, pink and white cistus and dark purple vetch, amidst tall green fennel and caper plants. As we got higher the cliffs plunged dramatically down to the sea and more rocky islets came into view, with Stromboli continually erupting its plumes of smoke. We soon reached the summit rocks from where there was a glorious 360° panorama of all the islands spread before us, a perfect picnic spot tempting us to linger in the warm sunshine.

But we still had a long way to go, so we headed off along the ridge towards the lower summit of Punta Cardosi. Ahead of us we could clearly see Lipari, where we had been the previous day, with the twin peaks of Salina to its right and the gaping crater of Vulcano to the left. We made our way carefully down the steep rocky path, through tree heather and prickly pear, the large spiky cactus-type leaves tipped with surprisingly attractive small yellow flowers.

And still the dramatic views down over the cliffs to the sparkling sea and rocky islets! As we approached the coast at Scoglio la Loca, the path flattened and turned eastwards to join the paved way leading to the azure blue waters of the beautiful Cala Junco cove and the prehistoric Bronze Age village on the headland of Punta Milazzese. More than twenty huts were excavated here in 1948, and the pottery found, now in the museum on Lipari, shows the influence of the Minoan civilisation of Crete on these islands.

After this brief historical interlude the path crossed a sandy beach where a few families were enjoying the sunshine. In the heat of the day it was tempting to join them for a swim in the clear waters, but we carried on, past the attractive white houses and church of Drauto, back to the port of San Pietro, where we sat over a glass of apérol spritz gazing towards Stromboli and the islets of Basiluzzo and Datillo.

This was indeed the nearest to paradise we had ever been, and we are already planning our next visit.

Gillian Price’s Cicerone Guide to Walking in Sicily gives lots of ideas for walking on the Aeolian Islands, as well as on the mainland of Sicily.

A walking guidebook with 46 graded routes in Sicily, including the Madonie and Nebrodi mountains, the Egadi and Aeolian islands and Mount Etna. Most walks take 3-4 hours, plus some short easy strolls as well as long mountain traverses. Interesting varied terrain, including river valleys, coastal walks, ancient ruins, volcanoes and mountain peaks. 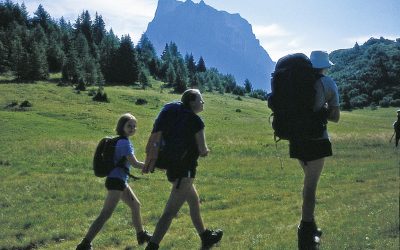 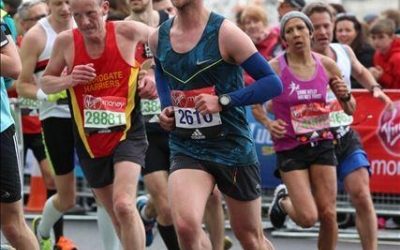 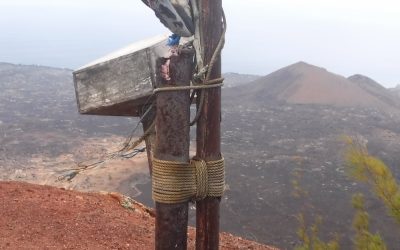 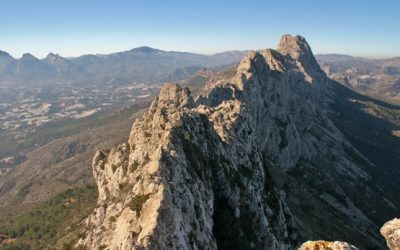 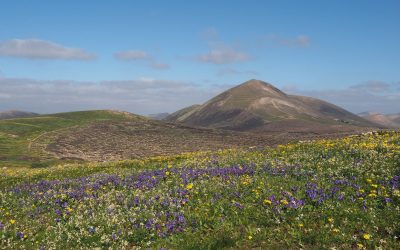