A chance viewing of a television programme in the early 1970s sparked Alison's interest in the Pilgrim Road to Santiago, which was at that time barely known in Britain. A walker for most of her life, she had the opportunity to walk the 1000-mile Camino from Le Puy-en-Velay to Santiago all in one go in 1990, a time which coincided, fortuitously, with Cicerone Press looking for an author to write an original guide in English to the Spanish section of the route. After that Alison walked and explored many of the pilgrim roads through Europe (France, Germany, Switzerland, Portugal) and wrote about several of them.

Alison's other interests included music and she played the French horn. Sadly, Alison died in 2020 following a long illness. 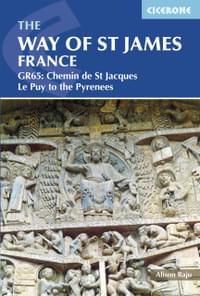 An intro to… The Way of St James - France, answering questions like 'What's so special about St James?', 'What does the scallop shell mean?' and 'How fit do I need to be?'.