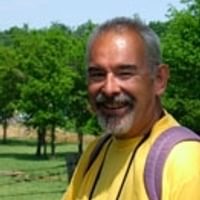 Since surviving camping trips as a youngster in the valleys of South Wales, John Traynor has gone on to backpack, pedal, paddle and enjoy tent touring by car, train and bus around the UK, Europe and much further afield. From Iceland to South Africa and from Canada to South East Asia via Nepal, he has managed to thrive on his many, and varied, camping trips. He has a wealth of experience and advice to offer, through lessons learned mostly the hard way over the years, 'under canvas'.

A regular contributor to outdoor magazines, he was a founding member of the Outdoor Writers' Guild, is a life member of Friends of the Lake District and an honorary life member of the Backpackers' Club. He splits his time between Europe and southern Africa to savour a variety of climates and cultures but has a particular fondness for Scotland, Northumberland and France.