The Cicerone School is finished 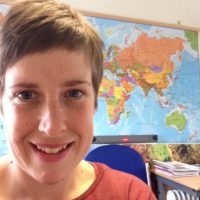 Cicerone have been fundraising to rebuild an earthquake-damaged school in a village called Rawa Dolu in Nepal. Hannah visited the school and helped to decorate it and refurnish the classrooms.

The village of Rawa Dolu doesn’t come up on Google Maps. In my trip preparations I had tried to download the map area so that I could get a sneak peak of what it looked like and I wouldn’t get lost while we were there for five days. The funny thing about assumptions and preconceptions is that you don’t know you have them until you come up against them with a jolt. In that moment, I realised that applying my usual way of doing things wasn’t going to work with Nepal.

In reality, Rawa Dolu is a collection of houses scattered along a steep hillside. It is home to a couple of hundred people, if that, and 36 children attend the local primary school. The school had been badly damaged by the earthquake in 2015 but the children had been using it anyway, eager to continue their education. The Juniper Trust had identified the school as one that needed urgent help and, as well as several other schools in the area, rebuilt it in 2019. Cicerone was instrumental in this, having fundraised all year to support the project, so I was there to represent the team and as part of the group of volunteers from Adventure Aid Nepal.

Cshiring (our sirdar and head of the trekking crew) woke us up on the first morning with our ‘Tent Tea’ – hand-delivered tea or coffee and a bowl of washing water. After a quick breakfast we set off for the school, about a half hour walk down the same steep hillside we had struggled up the previous day. We were about as slow on the descent as we were on the climb, owing to the slippery and wobbly rocks. The locals were clearly used to it and they overtook us easily, in both directions!

As the line of volunteers approached the school, we could see two lines of schoolchildren waiting, arms laden with marigold garlands to offer their visitors. I watched the rest of the group step forwards and bow their heads before I too was lucky enough to receive several handmade garlands. We were then shown to our seats and given a short performance by the schoolchildren and their teachers: singing, dancing and a speech. It was a touching moment and an honour to be welcomed in such a way.

When it was time to get to work the children took their places on the hillside just above the school – this was to be their temporary classroom while we were there. It was also a good vantage point for watching the workers and they seemed to be fascinated by what we were doing.

We were all given jobs by Sam but Suraj was in charge – he walked around observing our work and giving us tips. Just because we were volunteers did not mean we could do a shoddy job! Most of us were on painting duty: the school was a large building and the absorbent concrete would need several coats of undercoat and colour. Before we started, the whole building needed to be washed, inside and out. This would make the surface less dusty and allow the paint to hold better. The wooden window and door frames would then need to be primed before being painting as well. There was plenty to keep us busy and most of us got to work with paint pots and brushes.

A few more experienced members of the team were given the more daunting prospect of completing the toilet block, including putting down a floor, laying the waste pipe, plastering the walls and adding a roof. It was impressive to see the team hand-mixing cement and climbing on the roof to fasten corrugated sheeting to the wooden frame. As the toilet block wasn’t finished, we were invited to use the bathroom in the headteacher’s house – a very kind offer and a sign of the welcoming attitude of the local community.

We worked quickly and it was satisfying to see the progress that had been made every time I lifted my head away from my paint pot. Before I knew it, the porters were bringing lunch down the hill and we were served an incredible feast of Nepalese stuffed bread, potato wedges and a strange green spiky vegetable we didn’t have a name for. It was carb-heavy power fuel to keep us going all afternoon and it certainly did the job – I had been expecting a sandwich or something lighter and easier to carry down from camp!

Over the next few days we worked hard, recovering in the evenings around a blazing campfire. The work was more physical than I had expected; I had been building furniture and had stupidly expected to be simply fitting together flat-pack items. Again, you don’t realise what assumptions you’re making until you come face to face with the ridiculousness of having thought that there would be flatpack furniture at the school, which is four days’ trek away from a road. The whole trip was shining a spotlight at the murky pool of ignorance of how other people live and the everyday things I take for granted.

Another example of this was when I asked Suraj if there was another hammer. I had been chiselling holes in wood and it was exhausting and slow work; someone offered to help and was looking for tools. Suraj spoke to the carpenter – a smiling and hardworking man who looked after his tools, and us, by sharpening them regularly – and he grabbed a piece of wood and whittled it into a mallet in minutes.

After three days we were almost done and the school looked lovely. We had painted it inside and out, the toilet block was finished, and we had made several benches. The carpenter had a little ‘neatening up’ to do (I was glad that only children would be testing the joints…) but Suraj was happy. We had time to tidy up the playground, with the children’s help, and put up a volleyball net before getting the whole school together to receive their uniforms and for the official opening.

The children came rushing down and into each classroom, smiling as they admired our handiwork. They seemed to be surprised that we had come to their village to help as Rawa Dolu is not on any of the trekking routes and does not receive regular visits from tourists. I’m sure that they will appreciate having a toilet block and more comfortable and safe classrooms.

The children lined up in size order and we handed them a bundle with a schoolbag, pens and pencils and a brand-new uniform. They looked delighted and ran into classrooms to get changed, emerging with even bigger smiles on their faces. They looked very cute in their new clothes and we made sure we got a big group photo of all the children standing in front of the finished school – Cicerone sign included!

After a few rough and ready games of volleyball we thanked the villagers for their help and warm welcome and they, in turn, thanked us for our hard work. We were decorated with more garlands – it was a wonder there were any marigolds left in this valley – and then it was time to leave. I’d had a wonderful time in Rawa Dolu and it was incredible to see the school finally finished after so many months of blogging about it. Seeing the Cicerone sign go up really brought home the kindness and generosity of my employers and the Cicerone customers who had donated a large chunk of the building costs. Not many people will see the sign in Rawa Dolu, but the effects of the donations will last a long time and I pass on the thanks from the headteacher and all the children.

In Nepal Friday is a half-day, Saturday is a day off and Sunday is a normal day. Two days later, a Sunday, we arrived at another school – a much bigger primary and secondary school that had been rebuilt a few years ago by the Juniper Trust. Some of the children were still wearing the uniforms that had been given out then! We were there to give out new uniforms to the children and plant some trees in the school grounds. But first, the children had to do their morning routine so we found places to sit and watch.

Compared with Rawa Dolu this school felt enormous and as the children filed out of classrooms we were surprised to see the large schoolyard fill up. The children lined up in their form groups as if it was a fire practice. A small girl appeared at the front of the yard next to the teachers and started banging a drum and shouting more loudly than you might have expected from someone so small and cute. The entire yard full of children obeyed as she yelled ‘Attention’ and ‘Stand easy’ in an military manner. After this, the same girl and a few more children moved to the platform, put on some music and started to dance. Again, the crowd followed her lead and the whole school danced for about 20 minutes, glancing back at the small group if they needed a prompt for the correct moves. What a great way to start the day.

Morning routine completed, we were ready to hand out the uniforms. Once again, we asked the children to line up in size order and we had to cajole the very small ones who had no idea what was happening: ‘Namaste, here you go, this is for you!' Their English was amazing and the older students all said ‘thank you’ as we handed out the bags, pencils and clothes. The volunteers had raised all the money for these uniforms and it was an absolute pleasure to hand them out. We had time to have a look around the school and see what a happy community it seemed to be. The headteacher standing on bare feet to teach English numbers to the children and high-fiving other students as they passed felt to me like a demonstration of the relaxed and supportive environment here. He later told us that his school performed well above the national average in many subjects and it did not surprise me.

Then it was time for more garlands and some tree planting. The small bossy child came out to see what we were doing and we told her that they needed to take responsibility for watering the saplings. I have every confidence in her and I'm sure the trees will yield fruit in no time at all!

We left Kinja the next day, overtaken as we walked by children in their shiny new uniforms racing ahead of us to school. It felt sad to be leaving but we had a few tough days of trekking to occupy us and, as I got steadily further away, I thought about how incredible it was to have helped the children at both Kinja School and Rawa Dolu. I know I’m not going to forget their smiling faces for a long, long time and I am smiling too. 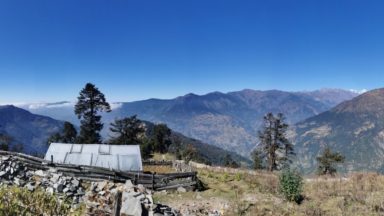 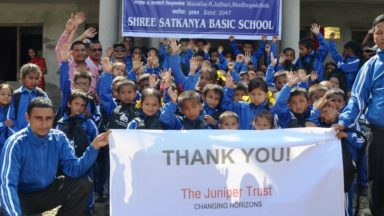 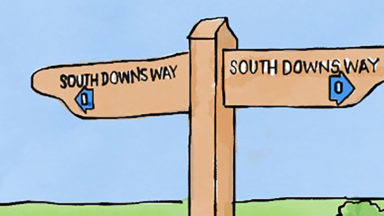 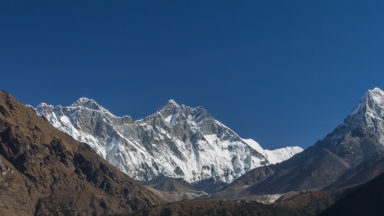 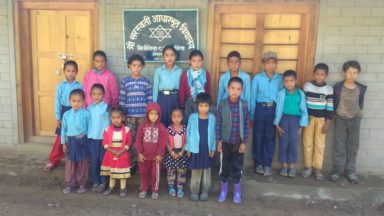 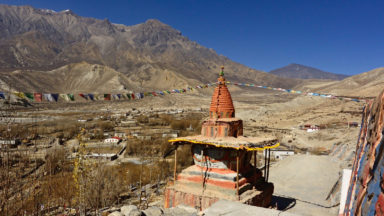