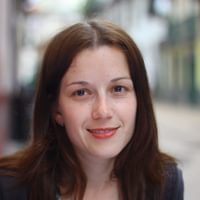 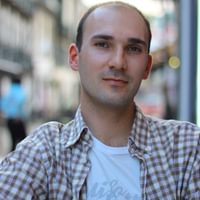 Following a via ferrata (iron path) is a popular activity in some mountain regions, and Nike Werstroh and Jacint Mig tried two in Catalunya during their walking holiday. Although equipped with all the necessary safety equipment, nothing could prepare them for the danger of an angry seagull.

The spectacular Cala Del Moli Via Ferrata in Catalunya was listed as suitable for beginners so, having tried some via ferratas previously, I dared to give this one a go…

The slight overhang forced me to stop. The cable disappeared behind the huge, rough rock and I couldn’t see the next foothold. Until that point everything had been going well. I made sure I safely clipped my via ferrata kit onto the steel cable and was traversing slowly but steadily while the blue sea washed the rocks just a few metres below my feet. However, the thought of pushing myself slightly away from the rocks filled me with panic. I spent a few more minutes holding onto the wire rope with a tight grip while figuring out what to do next. But there was only one way to go so I peered out to see the next foothold. I was worried that my short leg wouldn’t reach the next ‘step’ as, hugging the rock, I stretched my limb out. Somehow, I made it and continued.

When I finally passed the overhanging bit I felt more comfortable. However, it was clear that I should have done some upper body exercise to strengthen my arms prior to the trip.

We were the only people traversing the rocks that bright morning in May, so we could allow ourselves to take our time and soak up the views. Even though the via ferrata doesn’t run on high ground, the sea below the rocks makes the scenic route a bit more dramatic.

Traversing was fine, I even enjoyed it, but there were some so-called cable bridges connecting the rocks and they gradually became less and less stable. The designer of the route might have intended to slowly introduce people to the wire ropes, so the first two bridges were fine. The first was a steel bridge with plenty of space to step on to and it was possible to hold on to both sides. I felt pretty confident on that one. The second bridge was made out of three wire ropes; one for walking and the other two for securing the carabiners to. It was ok but the middle cable wobbled as I walked along it above the water. But when I reached a place where there were only two wire ropes connecting the rocks, one for walking, the second one, a bit higher, for the carabiner and hands, I wasn’t sure. They looked a bit unsafe and once I was on the ‘bridge’ both did swing a bit. I was wondering where to keep my centre of gravity to stop the ‘cables’ wobbling. If I leaned forward a bit, making the cable straighter, what would happen if my feet slipped?

Jacint, who was a few metres behind me, helpfully reminded me that I could not fall into the sea because the via ferrata kit attached to the wire ropes would stop that from happening. However, for the first time I started to wonder how I would get back onto the wire rope if I was dangling down by my harness. I really wanted to avoid such a situation, especially on a route advertised for beginners, so I grabbed the wire rope firmly with both hands. I don’t suffer from vertigo but as I moved inch by inch on the slightly wobbly ‘bridge’, I wasn’t very keen to look at the water below my feet. When I made it across the last one without slipping or falling, I felt quite satisfied with my progress.

An encounter with an angry seagull

Squealing seagulls were searching for food for their chicks, others nested on the rocks, keeping their eggs safe and warm. Therefore, many of them were very protective and, as it turned out, raised the danger level on the trail. As I completed the route and emerged onto rocks, a seagull – irritated by a human in a red helmet appearing from behind a rock – stood up from her nest and squealed at me angrily. I thought that it would be a good idea to wait for Jacint and let him lead from there. He emerged from the route and then bravely went ahead. I followed him, and as we passed the nest, the furious bird flew away, leaving her eggs behind. We walked along the narrow path as fast as possible to cause less stress to the bird. But she didn’t wait for us to pass in the distance; she came back with a scary scream and, with an impressive nosedive, let out a great deal of faeces onto Jacint’s backpack. The disgusting, smelly stuff was everywhere. We followed the path away from the rocks, back to a safer level, where it took us several attempts, numerous tissues and a bottle of water to clean the backpack to an acceptable level.

Electrified by the experience of Cala Del Moli (the via ferrata, not the experience with the seagull), we wanted to do another via ferrata in the same area and found one in Gorge de Salenys. This via ferrata was built in a gorge and was suitable for beginners, even kids. During the short drive, gathering dark clouds chased the morning sunshine away. It was cloudy and a lot cooler as we walked through the forest from the parking area to the start.

This route was completely different from Cala Del Moli. We started traversing on rocks with a trickling stream below. By the time I reached the narrow gap between the towering rocks, raindrops were thumping gently on my helmet. Jacint refused to put the raincover on his rucksack, hoping that the rain would clean it.

We carried on but the rocks soon became wet and slippery, and the easy route became a bit more challenging. However, it was still very enjoyable.

There were no birds out in the rain so Jacint stopped checking the sky above him and felt more relaxed.

The three steel bridges on this route gradually became longer; the last one was the wettest and longest and I was holding the wire rope with a very tight grip. My hands were wet and cold and my arms and fingers were exhausted by the end of the route, which I finished with a smile on my face.

The rain eased while we packed the via ferrata kit away and it stopped as we walked through the forest to the car park. Satisfied with the day, we drove to Girona in the late afternoon sunshine. 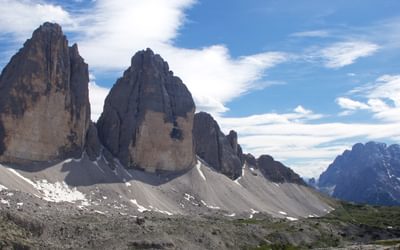 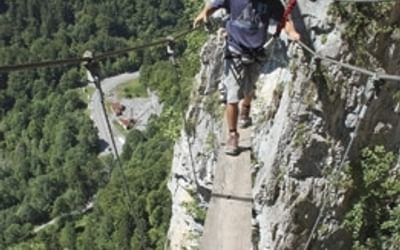 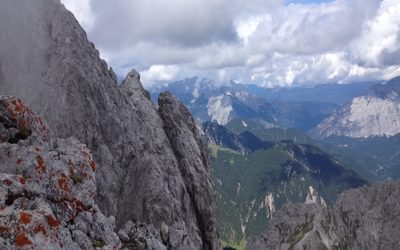 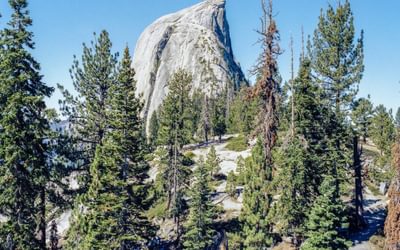 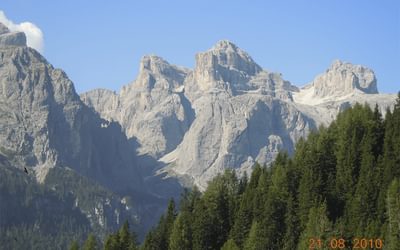