Walking guidebook to the highlands of Perthshire. Areas include Pitlochry, Rannoch, Aberfeldy, Ben Lawers and Ben Alder. 80 graded routes between Stirling and the Cairngorms explore grassy mountains and include 42 Munros, 22 selected Corbetts, 15 smaller hills and the Gaick and Minigaig passes. A range of walks for all abilities.

April to August for all routes, with April and May the best of all; autumn is great under the trees, but not necessarily on the hills with gales and rain fairly common, and some stalking season restrictions mid-August to 21 October; winter is good for the low level routes, and can also be magnificent on the high mountains for those suitably experienced and equipped

Ben Lawers, Schiehallion, Beinn a' Ghlo; historic passes through the wilds of Atholl; Perthshire's 'big tree country' at Birnam Wood, under the Birks of Aberfeldy, at Fortingall's ancient yew tree; the great rivers Garry and Tay

Overview
With 80 routes, this guidebook offers walkers many opportunities to explore the hills of Highland Perthshire. Bound by the Cairngorms to the north, Stirling to the south and stretching to Bridge of Orchy in the west, the graded routes include all 42 Munros in the region. In addition, the guide covers 22 selected Corbetts, 15 smaller (but notable) hills, the low-level routes in the 'Big tree Country' and the historic passes of Gaick and Minigaig.

A combination of 1:50,000 and 1:100,000 mapping is included as appropriate along with detailed route descriptions, information about places of interest, as well as wildlife, geology and practical details on the deer stalking season.
Table of Contents

Jolly green giants
Trees, please!
When to go
Safety in the mountains
Maps
Compass and GPS
Using this guide

13 Edramucky Burn
14 Up and down from the Lairig road
15 Lawers Four from Lawers village
16 The Cat’s Bowl (descent)
17 Down via Beinn Ghlas to Lawers village (descent)
18 Glen Lyon: Da-Eig Circuit

Some people enjoy exploring in mountains that are badly mapped or not mapped at all. They should stay away from Highland Perthshire, as it has been excellently mapped – three times over. The mapping in this book for the shorter and lower routes is from the Ordnance Survey’s Landranger series at 1:50,000. For these low walks this book’s mapping may be all you need. For mountain walks, however, it’s advisable to have a larger map that shows escape routes, and the other glen you end up in when you come down the wrong side of the hill. This guide shows mountain routes on 1:100,000 scale maps.

Harvey’s excellent British Mountain Map: Schiehallion at 1:40,000 scale covers about half this book, south of Lochs Tummel and Rannoch, and west of Aberfeldy – so Schiehallion is in the top right corner. The map is beautifully clear and legible, marks paths where they actually exist on the ground, and does not disintegrate when damp. Harvey also cover Ben Lawers in their 1:25,000 Superwalker format.

The Harvey maps mark fences and walls on the open hill, but not on the lower ground; Landranger doesn’t mark them at all. So if you’re planning complicated valley walks, you’ll prefer the OS Explorer maps, also at 1:25,000 scale. They are bulkier and less robust than the Harvey ones, and the contour lines are less legible. But if Harvey hadn’t done it better, they’d be excellent maps. Sheets 368 (Crieff, Comrie & Glen Artney), 369 (Perth & Kinross, one walk), 378 (Ben Lawers & Glen Lyon), 379 (Dunkeld, Aberfeldy & Glen Almond), 385 (Rannoch Moor & Ben Alder), 386 (Pitlochry & Loch Tummel) and 394 (Atholl) cover the ground.

Routes 30, 31, 32: Coire Achaladair now has a micro hydro scheme, with a smooth new track for the lower part of routes above Achallader farm.

Correction to the June 2013 printing

On the 'Location of Routes' overview map, the boundary marked is of the current Perth & Kinross District ('Perthshire') rather than the old county of Perthshire (which included Ben More and Ben Lui) as indicated.

'What a gem of a book. It is a model of accuracy, information, and mapping.It engenders interest in the geology and glaciation which formed our landscape, and the flora and fauna which inhabit it. Add to that judicious details of past and present human use, and you have full interest and fascination in the walks. The 80 routes are well chosen, well characterised in terms of distance and terrain, and described in considerable, accurate detail.

...All of this is included in a small volume, fit for the hand, rucksack or pocket, on leaded paper within plasticised covers. It is thus a must for those who love our county. Armchair walkers need not leave the sofa; walkers will enjoy using it before, during and after their walks.
I cannot recommend it highly enough.'

"Anyone who's ever done any walking in Scotland (and, indeed, just about anywhere in the world) will have come across Cicerone Guides for walkers. Meanwhile, that same audience will almost certainly have encountered the writing of Ronald Turnbull, whether in one or more of his many books about walking in Scotland or the Lake District (or further afield), or in magazines such as Lakeland Walker, TGO and Trail.

You'd expect the combination of Ronald Turnbull as author and Cicerone as publisher to come up with something pretty special when they turn their attention to Highland Perthshire, and we approached this book with high hopes. We were not disappointed. This is an outstanding little book, though whether "little" is a wholly appropriate description of a volume offering over 300 pages is open to debate."

It's astounding how much Cicerone's walking guides pack into a genuinely pocket-sized space. This one has 80 routes, clear maps and instantly noticeable symbols showing level of difficulty and time required - yet there's also a wealth of photographs and quirky facts, such as the number of Munros bagged by Queen Victoria (nine). 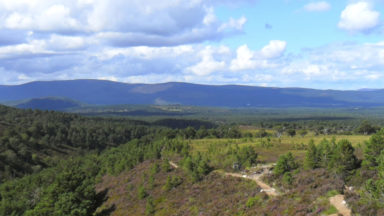