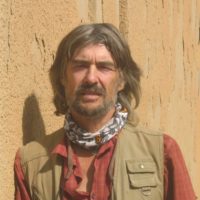 The story of the first western climbers to tackle the magnificent climbs on the ancient Bedouin hunting routes of Wadi Rum, Jordan. This Middle Eastern region is home to some spectacular sandstone rock climbs, as well as significant historical and cultural interest.

When T E Lawrence, best known as Lawrence of Arabia, arrived in Wadi Rum he was overwhelmed by the spectacular mountains, calling it ‘Rum the magnificent...vast, echoing and godlike... a processional way greater than imagination’. Camping close to Jebel Rum, he bathed at the foot of the mountain’s east face in the spring of Ain Shelaali. There, from ‘hidden crannies of the rock, issued strange cries; the echoes turned into music, of the voices of Arabs watering camels at the springs which there flowed out three hundred feet above the ground’.

Thirty years later, three members of a British Mission to Saudi Arabia travelling with the protection of Glubb Pasha set off to climb Jordan's Jebel Rum from the vicinity of what is now known as ‘Lawrence’s Spring’ at Ain Shelaali. One of the trio, StJohn Armitage, stopped before the summit. The other two, Major Henry Coombe-Tenant and Lance Corporal ‘Havabash’ Butler made it to the top – the first unguided and non-Bedouin ascent of any of Rum’s mountains. A couple of years later a British Survey team arrived, a few of whom made it to the top with Sheikh Hamdan Amad al Zalabia. Despite these intrusions, when another British party arrived in 1952, the indigenous people were still the only ones with an intimate knowledge of their mountains.

In this latest group, were Tom Longstaff (one of the greatest of the early Himalayan explorers, including the 1922 Everest expedition), his wife Charmian, his daughter Sylvia and her husband John, who was in Glubb’s Arab Legion. The previous year, Sylvia and John had been half way up Jebel Rum, hunting ibex with a young Bedouin. John said it had been ‘hair raising...poised between heaven and hell...never again would [he] set foot upon those ghastly cliffs’. Consequently, when Sylvia and Charmian decided to try again, they also took Sheikh Hamdan as their guide. He chose to climb via the west face, by the route up which he had taken the survey team, most of whom had turned back. The route ascended a huge rift now known as The Great Siq, which completely splits the mountain. John went off hunting ibex on another mountain with Sheikh Atieq – the man who was to welcome us to Wadi Rum 32 years later.

Climbing the canyon’s southern wall, Sheikh Hamdan’s party had to pass a steep chimney with a crevasse directly beneath and a two hundred metre drop below. Beyond, they reached the domes of the high plateau, through the maze of which Sheikh Hamdan led them to the summit. ‘Hamdan climbed with bare feet as surely as a mountain goat’, Charmian Longstaff wrote in the Ladies’ Alpine Journal. He was obviously also impressed by his two companions, ‘You English women’ he said, ‘are as strong as men’. They were certainly competent, as they climbed the canyon in two hours, taking ‘another hour up and down the complication of white domes to reach the summit’; a good time that is still rarely bettered.

These three ascents of Jebel Rum remained the only known climbs of any of Rum’s mountains until we arrived on our quest for new rock to climb in 1984. At that time, Rum village was still predominantly a Bedouin camp. The single track access road was poor. There was no electricity. Water was from the spring of Ain Shelaali, where TE Lawrence had bathed in 1916. Brass pestles and mortars chimed from the Bedouin tents in the early dawn, announcing coffee, while curls of juniper smoke from their fires rose lazily into shafts of morning light which pierced the gaps between the mountains. Tourism was almost unknown. We were the only strangers there.

Two young Bedouin, Defallah and Sabbah, and their father, Sheikh Atieq, welcomed us. They introduced us to Hammad Hamdan, son of Sheikh Hamdan, the man who had led Sylvia and Charmian to the summit of Jebel Rum 32 years previously, while Sheikh Atieq had been hunting ibex with John. It was from them that we learned about their hunting routes and other ways into the mountains to collect medicinal herbs, or for special fodder for their livestock or for water in times of drought. They climbed alone and bare-footed and were keen that we should repeat their climbs and invite others, quickly appreciating that it could bring extra income for them as guides.

As they took us through the desert, they pointed out deep canyons and precipitous ridges up which their routes went to the summit domes. The climbs sounded fascinating and looked amazing.

While gathering firewood with our new friends for a circumcision feast, they showed us a spectacular natural arch, at that time unknown to all but the Bedouin. We reached it by two Grade 5 (VS) climbs up the mountain’s 300m east face, but it was our discovery of the Bedouin route in 1985 that led to the Rock Bridge of Burdah becoming one of the local community’s best assets. Our new friends also told us of various routes to the top of Jebel Rum, the area’s most famous mountain. Above the black tents of the village, they showed us a huge cave, high in its east face. ‘That’s the way to the top,’ they said, adding, ‘It’s easy. It will only take you four hours. You won’t need ropes.’ Well, it didn’t look that easy, but we were yet to learn that they had a climber’s sense of humour! We decided to take one rope between the four of us, ‘just in case’ and were not surprised when the initial pitch turned out to be a VS crack. Then, as we climbed higher, we became lost in an immense canyon. Eventually, we continued up through steep, exposed cracks and chimneys, marveling at the Bedouin’s ability to climb alone in such wild and exposed surroundings – and climb back down with an ibex on their back!

It was after midday when we emerged from the massive cave and reached the top – to discover that it wasn’t the true summit. After climbing some domes, it was visible a kilometre away over complex terrain. With little time left, we down-climbed most of the route, a time-consuming process ending in a forced and waterless bivouac. When we returned to camp next morning it was to be greeted by our smiling friends – Round 1 to them! (Actually, they were right, once you know the way, four hours is the correct time, but few other than the Bedouin can climb and descend this 400 metre VS without ropes!)

When asked which of their routes went to the highest point, they directed us to Al Thalamiyya, ‘The Dark Place of the Djinn’, a massive cleft cutting into the east face. It seemed an unlikely starting point, being almost two kilometres from the summit, but it proved fascinating. Like the cave climb (which we later named The Eye of Allah) it provided continuously interesting climbing. It was also technically harder, even more complex and extremely long.

It was on this climb that we found some Bedouin ‘tricks of the trade’ such as piles of stones, cut holds and branches wedged in cracks to pass difficult overhangs. Here also, we discovered their system of cairns: the occasional single, anomalous pebble to mark the way, a few stones at a turn in the route and a ‘wall cairn’ marking a no-go point. We were eventually forced to return, once more within view of the top, by the seemingly impassable canyon of the Great Siq. Mysteriously, there were Bedouin footprints leading to its edge and when we finally found the way to reach its other side by a different route a few days later, we found the same footprints there also. A year later, we repeated Al Thalamiyya, abseiling into the Siq and climbing out, which is now the normal way, but the Bedouin still maintain it can be crossed without a rope. Those footsteps would seem to prove it.

With only a few days left of our stay in Rum our Bedouin friends finally revealed the secret of the direct way to the top via the correct side of the Great Siq, up a climb created by Hammad. It enters The Great Siq from the south east, whereas his father’s way, Sheikh Hamdan’s Route reaches the summit from the west. Once deep inside, it exits by the vertical south side up some Grade 5 rock with a dead juniper tree for aid, jammed in place by Hammad – more Bedouin tricks! Having emerged from the cathedral-like rock architecture of the Siq, and after some complex route-finding we struck directly along a line of domes for the summit ridge. There, some mini-siqs briefly threatened our success but were bypassed by bold leaps and enjoyable detours before we finally and jubilantly arrived at the summit with the first storm of winter gathering and waterfalls falling down the face of Jebel Nassrani a kilometre to the east across the valley of Rum. At 1754m and only 700m above the desert it was a hard-won top but, thanks to our Bedouin friends, in reaching it we had learnt a lot about their climbs and their mountain. We enjoyed the reward of the panoramic view to the full, extending as it does out towards Saudi Arabia and Sinai over a colourful vista of sand and mountains, hiding remote Bedouin camps that we were beginning to call home.

Our exploration of these hunting routes continued over the years, sometimes in the company of our Bedouin friends, more often simply following their hints and trying to discover their ways for ourselves. In 1985, we climbed the dramatic sweep of Sheikh Kraim’s Hunter’s Slabs and the magnificent Rijm Assaf (The Tower of Assaf). Its crux was a bold pull over an overhang from a tottering Bedouin cairn balanced on the edge of space. Later, Di and I followed Sabbah Atieq up a route on Jebel Khush Khashah, from which a Bedouin woman had fallen to her death when descending with water. We also climbed with him over Jebel um Ishrin through the challenging and complex canyons of Mohammed Musa’s Route.

On Jebel Rum, Sheikh Hamdan’s Route, up which he had led ‘the English ladies’ to Jebel Rum’s summit in 1952, proved to be delightful. From the top, we descended by his son’s route, Hammad’s Route – a magnificent mountain traverse ‘of alpine proportions’ and now a sought-after classic. Also from the west, we climbed Sabbah Atieq’s Route with its exposed traverse above the void to reach the summit domes. Then, in 1995, Di and I reached the top by the Thamudic Route, perhaps the world’s oldest known rock climb, still marked by the inscribed names left by two hunters ‘Kharajat, son of Sa’adan’ and ‘Jahfal, brother of Taym’ over 2000 years ago.

Now, in the 21st century, Rum is acknowledged as one of the world’s best desert climbing areas and the Bedouin routes have achieved the ultimate accolade of among the world’s best mountain adventures. In addition there are over 500 new climbs in Rum from easy scrambles up to grade 8 climbs, as well as numerous desert treks, and camel and horse safaris. Our Bedouin friends are prospering as desert and mountain guides and have opened visitor camps in the desert. The hospitality that they gave so freely to four strangers in 1984 has reaped its deserved rewards.

For more info on Jordan and the mountains of Rum, visit www.nomadstravel.co.uk or check out the Cicerone guides below. 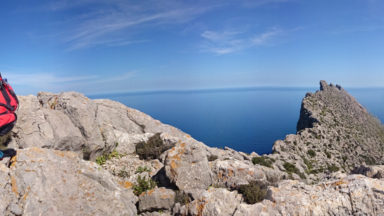