The best walks go all the way across, says Cicerone author Ronald Turnbull. Having crossed Highland Scotland nine times, he offers a few suggestions for a successful and enjoyable trip.

From the fjords of Wester Ross; through the huge schisty hills of the central Highlands; to the gravel plateau and ancient pines of the Cairngorms or the rounded heathery glens of Angus: any walk from the Atlantic to the North Sea is going to be a big, serious hike.

The full crossing of Scotland measures up with world favourites like the John Muir Trail and the tough treks of New Zealand. The difference is that it's a route without a route-line: you make your own unique way across.

For some this will be a lifetime achievement. For a few it's their spring break every year, finding a new route each time as part of the lightly organised Great Outdoors Challenge by the same-named magazine.

So just how tough is it, and what's the best way to set about it?

How tough is this going to be?

Any full crossing from the Atlantic to Aberdeenshire or Angus will come in at around 250 miles (400km) and take around two weeks. Expect days of at least 15–20 miles (25-35km), possibly involving 1000m of ascent. Some of those days will be horrible rainy ones. Your pack will be unpleasantly heavy. There will be midges. If you're mapreading's not up to much, you'll get lost. While if your route choice is really poor, what you get lost in will be the middle of a bog…

All that, though, is the easy option. Go for a high-level line, over mountaintops above the 750m mark, and you can make it quite a bit tougher still, with the extra effort raising your walk to a whole new level of reward.

It's possible to walk right across with a roof overhead every night. This requires careful route choice, plus time on the telephone making sure that the Allargue Arms at Corgarff on the River Don didn't just close down. (In the case of that useful nightspot at the eastern exit from the Cairngorms, the sad news is that it just did.)

The best crossings involve two or more long stretches of empty roadless country, requiring you to sleep out in the middle. So those looking for comfortable nights all the way across should try to include one of the two off-road hostels along the way: Alltbeith at the head of Glen Affric, and Loch Ossian at the northern edge of Rannoch Moor. Even those using more rugged forms of accommodation will value a couple of hotel nights to get dry on the outside, moistened with beer on the inside, and catch up on some green vegetables.

Many of the ancient inns, as well as the hostels of Hostelling Scotland (formerly SYHA), are delightful in their own right, quite apart from the comforts they offer. The independent hostel at Glenfinnan was once a railway sleeping carriage; the B&B at Rua Reidh near Gairloch is a lighthouse.

Please check whether bothies are open before you travel as they have been closed in response to Covid-19. As always, don't reply on bothies as they may be full/closed. You should always take bivvying/camping equipment as a back-up.

The bothies of Highland Scotland are crucial, whether as part of the planned route or as a fallback for storms. These simple, unlocked shelters are dotted across the map in the most useful places. Expect a slate roof, a door to shut out the midges and a wooden shelf to sleep on.

Do not expect electricity, wifi, a warden, room service or running water. Bothies are marked on maps but not necessarily named. On OS Landranger maps, a pinkish square is a building with a roof. If it's miles from any road, odds are it'll be a bothy.

The Book of the Bothy describes many of them in loving detail. Most are maintained by the Mountain Bothies Association and those ones are listed on their website or may be detected by intelligent googling on the Internet.

You will not be turned away from a bothy (unless it recently burned to the ground, as they sometimes do), but you may find it already full up with drunken revellers, Lycra clad mountain bikers or even sheep. You'll squeeze in somehow. But even with the roof overhead, your pack will have been weighed down with a sleeping bag, some food and, for gourmet diners, some gadget to heat up that food on.

For ultimate flexibility in route choice, and some utterly memorable mountaintop sleepouts, there's a lot to be said for your own portable bedroom. Plus, it lets you get away from the bloke in the bothy who needs to tell you about every other bothy he's slept in over the previous 60 years.

Modern tents can be astonishingly lightweight, provided you're prepared to spend the right amount of money (rather a lot). That said, it's surprising how non-lightweight even the most expensive tent turns out to be when it's wet right through and the back you're carrying it on has blistered feet at the bottom. The trick is to pre-stress the shoulders by carrying a heavier pack on several daywalks in the weeks before the big trip.

A bivvybag isn't much lighter than a really expensive tent. The benefit is the way it encourages you to leave behind some other heavy stuff, like the stove and the portable towel and the hair dryer. The other benefit is the way the wonderful mountaintop becomes a whole lot more wonderful when you're not seeing it from inside some zipped up orange nylon.

A bivvybag is an emotional amplifier. On nice nights, with your face out in the starlight, it turns your sleep experience up to Eleven. On nasty nights, it's very nasty indeed. Most of my Scotland crossings have been with a bivvybag. But for each sleepout on the summits, I plan so as to have a bothy in the valley below that I could divert to under a thunderstorm. The delights and downsides of the bivvybag are described in The Book of the Bivvy, with one bivvybag crossing of Scotland described in detail. Its new and revised edition is due in 2021.

All of Gaul, says Julius Caesar, is divided into three parts. (‘Gallia est omnis divisa in partes tres.’) A statement so boring that nobody has ever get beyond the opening sentence of Julius's famous account of his warfare in the remote edges of the Empire. To avoid this depressing mistake, I've put the equivalent statement about Scotland a long way down into this article.

Yes, Highland Scotland comes in three sections. South-westerly winds of the Ice Age piled up the snow on the western seaboard, building big fierce glaciers. Those have gouged the West's deep, steepsided glens leading to long narrow fjords, although as we're not in Norway we call them sea lochs.

The mountains above are steep-sided, with narrow ridges and a whole lot of bare rock. Whether it's Wester Ross, Knoydart, or that fine country northwest of Fort William, these are Scotland's most serious hills. And those south-westerly winds are still blowing, bringing lots and lots of rain, vigorous rivers, and deep, green vegetation of the valley floors. Off-path wandering here can be tussocks thigh high, leading to a rocky riverbank and no footbridge.

The Great Glen is the first divide. Once into the middle bit of Scotland, the hills are still big, given that one of them's Ben Nevis. But useful paths run along their ridgelines; and often those ridgelines run usefully east and west. Meanwhile, the valley floors are more walkable, with alder trees dangling above green riversides that are just right for the tent.

Across to east of the A9 road, the country changes again. The hills are heathery and smoothly rounded. The choice here is to confront the Cairngorms, Britain's biggest lump of mountain ground, where high gravel plateau leads to the granite edges of the Lairig Ghru. Or else not, and take the gentler hills of Atholl and Angus, where long Landrover tracks run on and on through the heather. Either way, the edge of the hills is fertile farmland and small country towns leading out to the sea.

Which direction to do it?

The annual Great Outdoors Challenge runs west to east, Atlantic to North Sea. Most of the nasty weather comes from the southwest, so that the rain hits your rucksack rather than your nose. This also puts the toughest and most demanding ground into the first half of the walk.

For the ambitious walker aiming at a high-level mountain line, that second advantage is actually a disadvantage. After the first two or three utterly thrilling days, the ground gets gradually less exciting, down to the final flat day out across Aberdeenshire or Angus. What helps here is to take the eastern part of the route right through the Cairngorms, perhaps with an overnight stop below the 1200-ton boulder called the Shelter Stone.

For the less ambitious (anyone aiming right across Scotland is ambitious enough, on any sensible measure of ambitiousness), the eastwards direction can work well. Start low – maybe through the wild glens of Knoydart. And as you go along, get higher. In the middle, take in a couple of the mountaintops. And once across the A9, find the highest line you can. Crossing the plateau of Lochnagar makes an ending that matches up to those wild western glens at the start.

Some shorter or easier options

If the full two weeks and 400km seems a bit much – well, you're quite right, it is a bit much!

On the John Muir Trail you load up with all your food for the final 11 days. In Scotland, you shouldn't need to carry more than 3 days' worth.

In the west they are steep and fast flowing. In the east they're wide and full of salmon. In normal summer conditions most of them can be crossed. After prolonged heavy rain, most of them can't. Footbridges marked on maps aren't entirely reliable, and even Google Earth can be several years out of date.

In the areas they cover, Harveys British Mountain Map series at 1:40,000 scale are ideal. Otherwise, the Harveys Superwalker and OS Explorer at 1:25,000 are good but bulky, the OS Landranger at 1:50,000 is probably the better choice. Don't rely entirely on A4 printouts, as bad weather may drive you off the edge of the page.

And this is the most serious problem of them all. So many high ridgelines run handily east and west: Ben Nevis and the Aonachs, the Ben Alder group, Beinn a' Ghlo in Atholl, the seven Munros of Cluanie – the list just goes on and on.

Fine passes include the Corrieyairack, with its 250-year-old military road, the Lairig an Lui through the Cairngorms, the wild Mam na Cloiche Airde through the mountains of Knoydart, Jock's Road over to Glen Clova.

Great glens include almost any of them without a road: Glen Nevis below the mighty Steall waterfall, Glen Affric with its two lovely lochs, Glen Esk in the furthest east.

Great start-points: it's hard to beat Inverie, reached by the West Highland Railway and a ferry ride out of Mallaig.

Great places to stay: almost anywhere, even if I'm not that enthused by Aviemore.

After your once-in-a-lifetime walk, watch out! You're likely to find yourself immediately planning the next one… 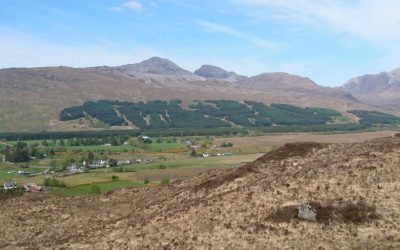 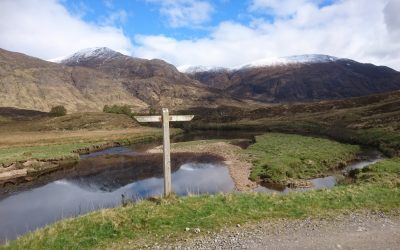 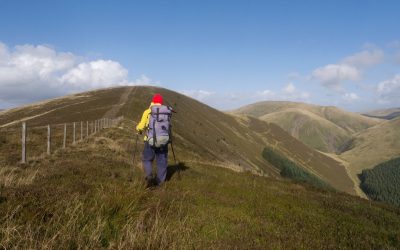 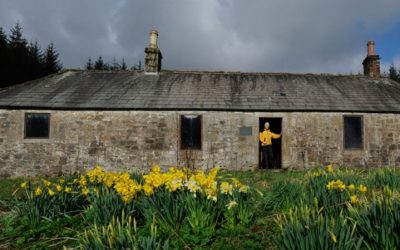 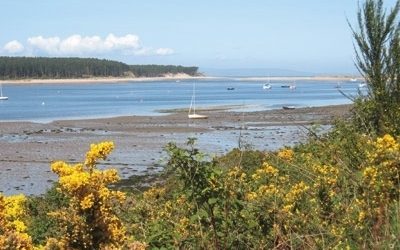 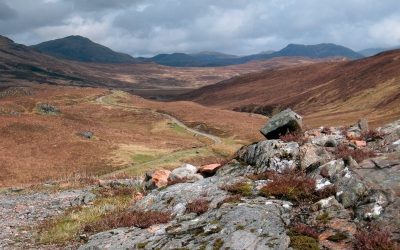