Kev Reynolds knows the Alps like no one else. He tells us about a trek in the little-known Silvretta and Rätikon Alps, the mountain regions that straddle the Swiss-Austrian border. Characterful huts, sleepy alpine villages and remote and mysterious peaks and valleys make up this area.

I never did make it to the summit of Piz Linard, the highest of the Silvretta Alps. Maybe 50m from the top I dislodged a rock that landed on my wife’s head. She wasn’t wearing a helmet at the time, and although the wound was not life-threatening it was certainly bad enough to hasten a retreat to administer first aid.

We’d only been married a few months.

Four decades later, we stood side by side on the Vereina Pass and gazed across the depths of Val Sagliains at our old nemesis. Seen from the west, Piz Linard looked much more benign than it had from the south all those years ago. But by now we’d lost all interest in climbing and were content to make a tour around much of the Silvretta and Rätikon groups, of which ‘our mountain’ was virtually a cornerstone.

The Silvretta Alps carry the Austrian border along Switzerland’s eastern fringe, and are linked with the Rätikon Alps near the grassy Plasseggenpass. The two groups are very different. Reminiscent of the larger Western Alps, the Silvretta are daubed with snow and ice, while the Rätikon are almost completely ice-free and dolomitic in stature. No Rätikon summit reaches 3000m, but at least 40 Silvretta mountains top that height.

I’d made a partial tour several years before, drifting from one side of the international border to the other, scrambling onto summits, where I’d had the world to myself, then staying overnight in the rich variety of huts that provide the district with such great trekking. It was then, in those cherished periods of day-dreaming that so often lead to a feast of adventures, that the idea of making one or two multi-day tours began to take shape.

Jonathan and Lesley were keen to join Min and me, as were our trekking friends John and Janette, so six of us arrived in Klosters on an early summer’s afternoon and took the Vereina Bus (a private minibus) to Berghaus Vereina. This charming hut-like inn, nestling deep in the mountains at the end of a dirt road at the confluence of the Vereina and Vernela valleys, has a view to the Flüela Wisshorn. The meals were filling and mattresses comfortable, but next morning we were away soon after breakfast, eager to get going on our trek.

Either we were a week too early, or spring was late in leaving, for there was no footbridge over the Süsertal’s river, and the snow-melt water was numbingly cold when we removed boots and socks and waded through. Kicking our way up a long snow slope, we eventually reached the broad and snow-free Vereina Pass (2585m), and there was Piz Linard ahead, its gullies leading enticingly to that elusive rocky summit.

Below Piz Linard, Val Sagliains drains down to the Lower Engadine. It’s a wild little valley, bare and stony at its head, tangled with vegetation lower down, and below 2000m fixed cables safeguard the way over rocky sections, so we were hot and weary by the time we stumbled into Lavin in search of a bed for the night. Although the village lies at its feet, Piz Linard was hidden from view. We wouldn’t see it again. 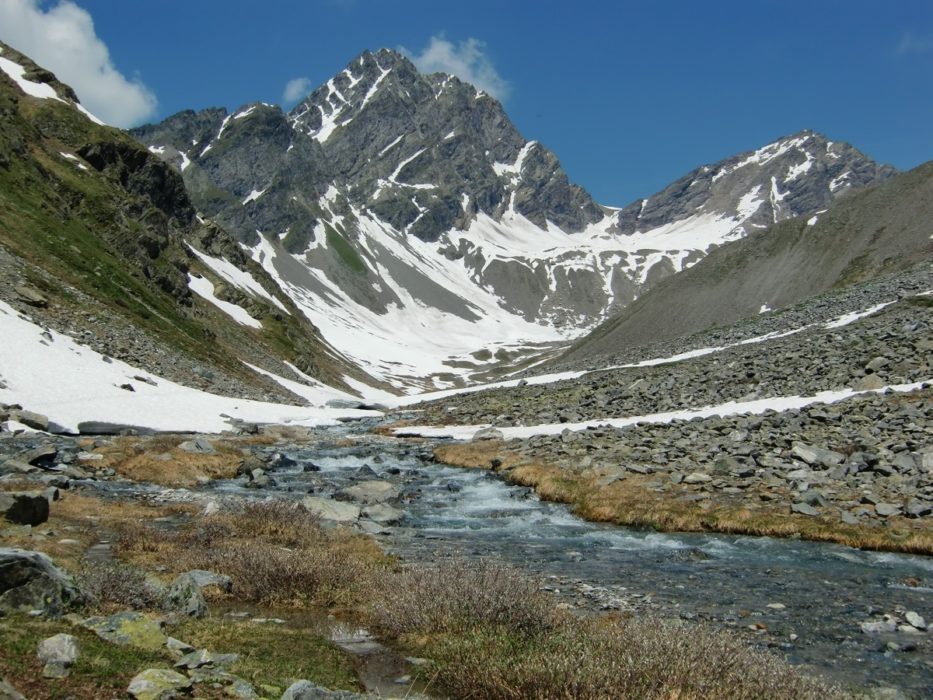 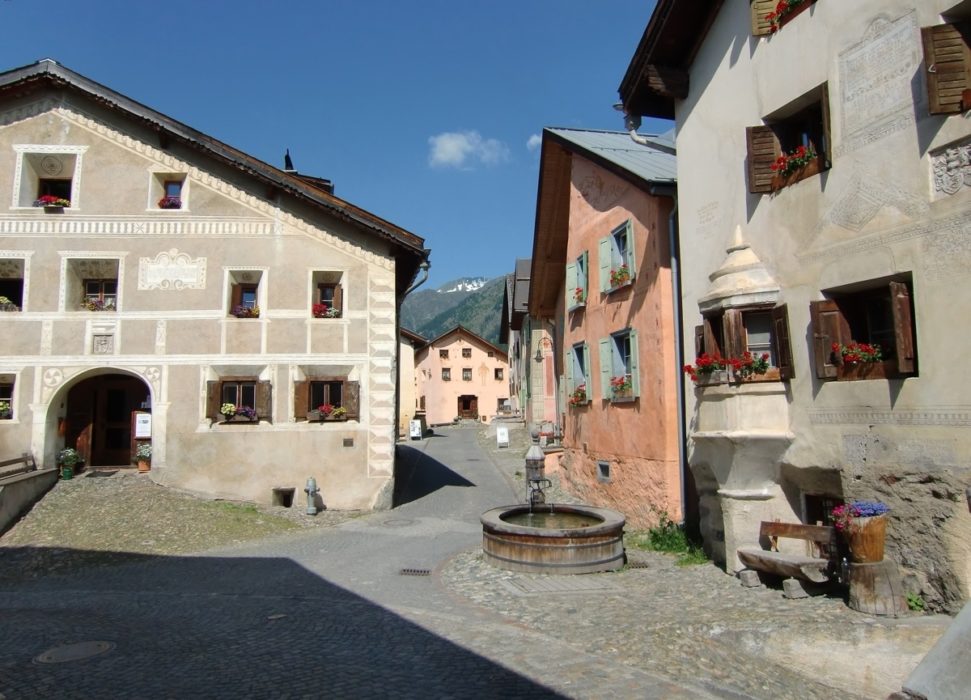 While Val Sagliains is wild and narrow, Val Tuoi, into which our route led next day, is very much the opposite. After wandering through the old, thick-walled village of Guarda – one of the loveliest in the Alps – we strolled between open meadows so full of flowers there was barely room for a blade of grass. At the head of the valley Piz Buin beckoned. Directly below its south face stood the Tuoi Hut, a very fine, modern hut with 95 dormitory places and an open terrace on which to sit, cold drink in hand, as you try to work out routes on the big rock walls ahead – comforted, perhaps, by the knowledge that you have no intention of climbing them.

If the walk to the Tuoi Hut had been fairly short and undemanding, the next stage of our tour was much more strenuous, with two passes to cross on the way to the Jamtal Hut in Austria. The first of these was the Furcletta (2735m), a narrow, rocky saddle which gave stunning views in all directions – especially back the way we’d come, where Piz Buin had the appearance of a towering cone of rock, standing head and shoulders above its neighbours. A sign here suggested five hours to Pass Futschöl on a route that would take us down through Val d’Urezzas (rough under foot), then into the pastoral Vals Tasna and Urschai whose upper reaches seemed refreshingly remote and mysterious, especially as we laboured up to the frontier ridge through a natural rock garden where tiny alpine flowers spilled out from beneath rocks, or formed cushions over them. 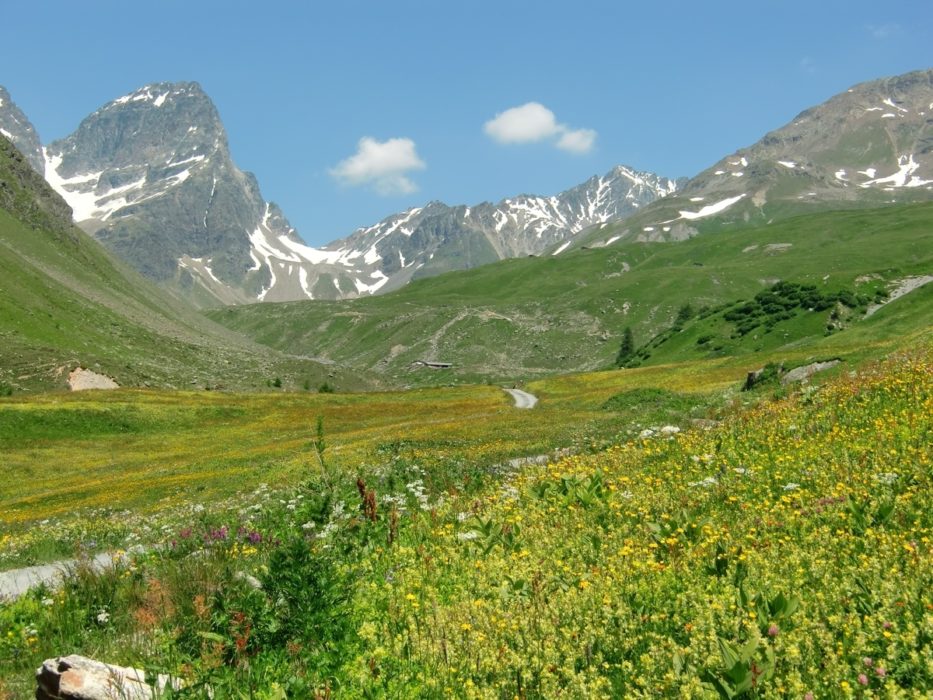 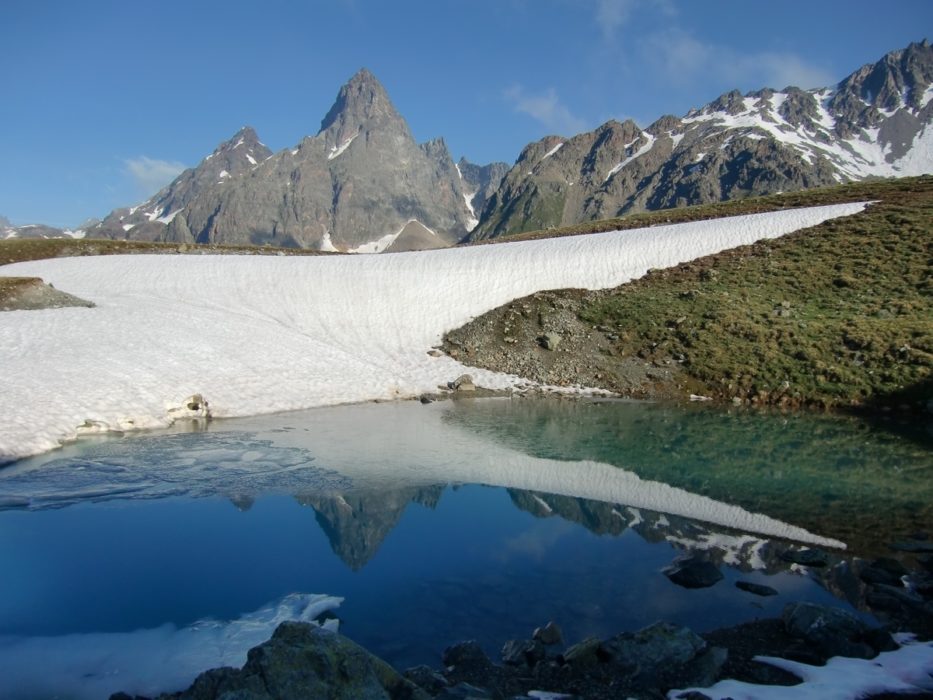 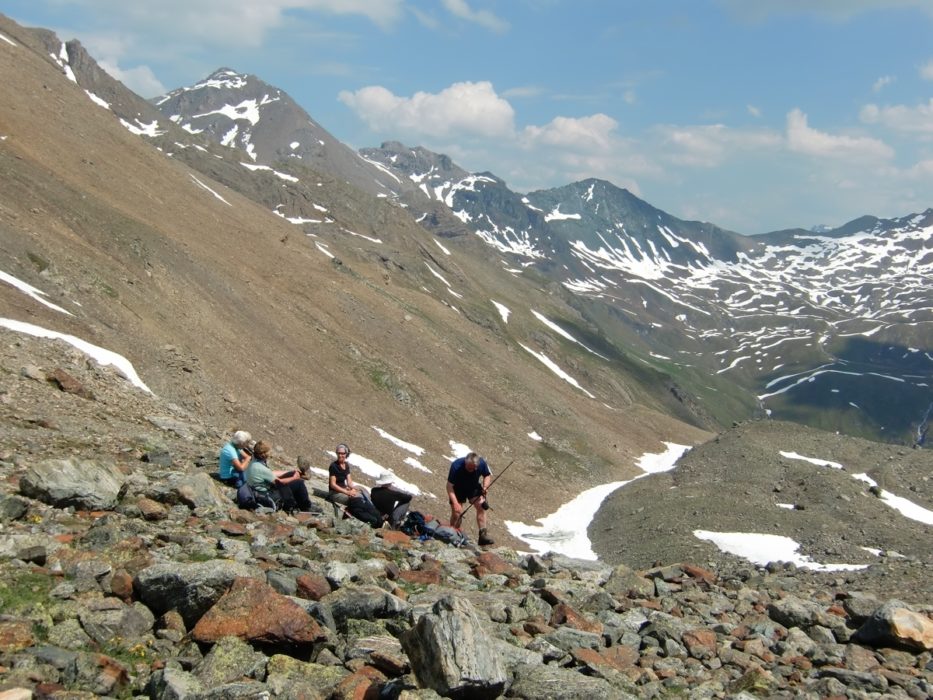 We rested below the pass as a cool wind washed over the ridge from Austria, the Swiss sun warm on our faces. But once we’d crossed the pass clouds gathered and the descent to the huge Jamtal Hut will be remembered for the heavy rain that had us soaked by the time we pushed open the door and stepped inside.

It rained practically all the way to the Wiesbadener Hut next day, so we took an easy way round the mountains, leaving a perfect excuse to return another time to check out the route across the rugged Getschner Scharte (2839m), which gives a more direct route between the two huts.

It had been many years since Min and I had last been at the Wiesbadener, but we recalled the view across the glaciers to Piz Buin – the same Piz Buin we’d slept below at the Tuoi Hut, but which looked so different from here. The glaciers were much more extensive during that previous visit, but now they were mysterious, with clouds spread across them, and when those clouds lifted a little we were teased with empty promises.

The Saarbrucker Hut was next on our itinerary, and the route we’d chosen to get there was via the Litzner Sattel. I’d not crossed that pass before, but had once studied it from a distant ridge, so it would be good to discover its secrets at last. It proved to be an interesting route, but one that was confused by yet more low cloud and rain: after slushing our way down through a softening snowfield, we arrived at the Saarbrucker Hut without properly knowing what we should have seen.

Making my way back to Switzerland on a previous visit, I’d crossed a series of ridges separated by two easy glaciers. Now, when we topped the first ridge at the Kromerlücke above Saarbrucker, it came as a surprise to discover just how much had changed in the seven years that had passed since. Back then I’d virtually stepped off the ridge onto the first glacier: not now! We were faced with a slope of near-vertical scree loosely held together by a layer of soft snow, while what was left of the glacier lay some distance below. As a result of this, our crossing to the Plattenjoch (2728m), by way of two ice sheets divided by the Mittelrücke, was more heart-in-mouth than expected. But the views were exceptional.

When I returned the following year to finalise research for the guide, I chose an alternative route to the Plattenjoch which uses the lonely Tubinger Hut instead of the Saarbrucker. This gives two options for a return to Switzerland, both of which are almost as good as, and much safer than, the original.

You can just about see the Tubinger Hut from the Plattenjoch, but descent of the Swiss flank grants exciting views to the Gross and Klein Seehorn as you plunge down a narrow and precipitous trail into a desolate basin of rocks, streams and pools, before continuing down the steep slopes of the Seetal, bright in early summer with scarlet-headed alpenroses. We passed above the turquoise lake that gives the valley its name, then stopped for welcome refreshment at the tiny Seetal Hut, built beneath a huge overhanging boulder 400m above the Sardasca valley which flows easily down to Klosters.

On an earlier occasion I linked our six-day Tour of the Silvretta with the Rätikon Höhenweg, by trekking the first two stages of the five-day Prättigauer Höhenweg which led to the delightful little village of St Antönien. But on this occasion, the six of us took a train the short distance from Klosters to Küblis, then a bus to St Antönien, where we slept in a dormitory at Hotel Rhätia.

Nestling a few kilometres below the limestone walls of the Rätikon Alps, St Antönien is a sleepy little village, and a perfect place from which to begin a tour of the frontier mountains. Having discovered it on my very first visit, I was glad to be back, but I’d forgotten just how steep the hills immediately above the village are, and we dripped buckets of sweat on the way to the Carschina Hut. Dwarfed by the towering crags of the Sulzfluh, we sat in the sunshine to enjoy a hut-produced lunch before weaving a route among bizarre pinnacles of white limestone to cross into Austria again at the Drusator. That evening we were served a delicious meal sitting outside the shingle-walled Lindauer Hut, while finches chittered among the pine trees, and the sun went down over the Drusenfluh. 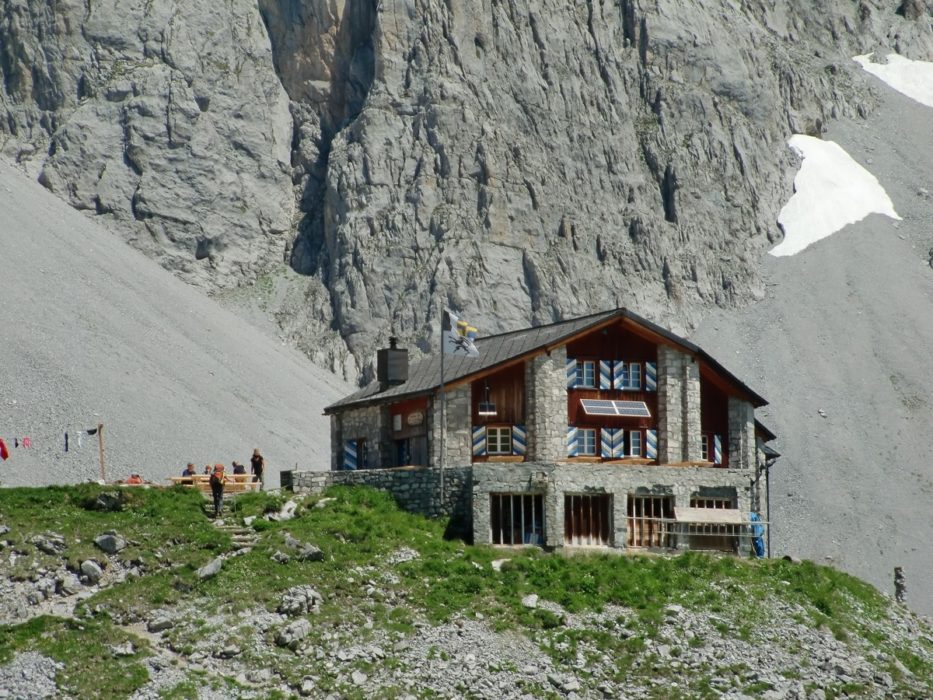 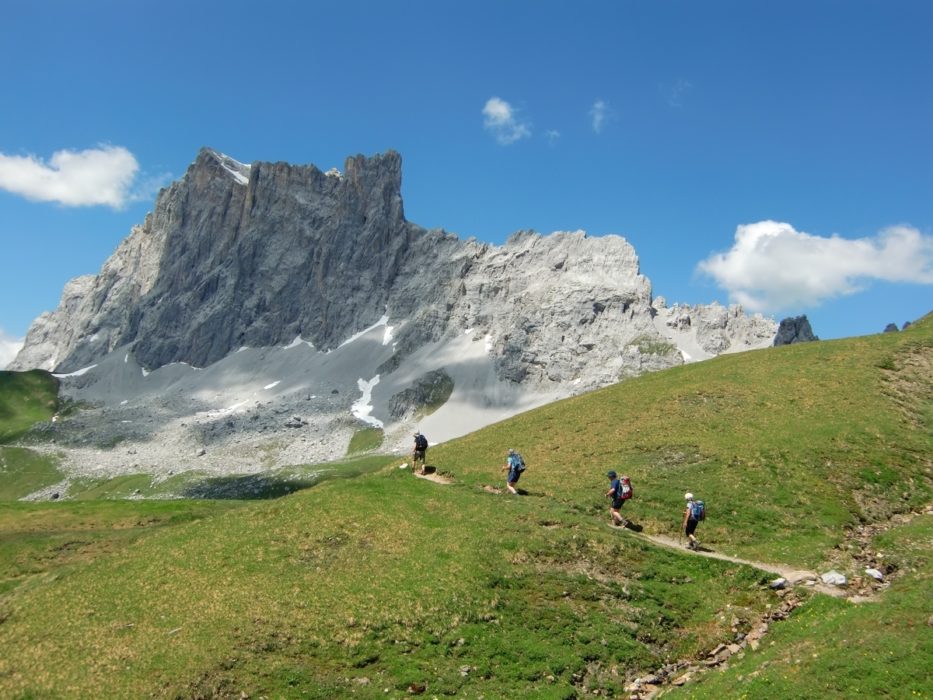 It was at the Lindauer Hut that we joined the Rätikon Höhenweg Nord, a well-known hut-to-hut route that makes a tour of the Austrian flank of the Rätikon Alps. Most walkers who tackle this do so heading roughly eastward: we were bucking the trend and heading west, but only as far as the Totalp Hut, built on the slopes of the district’s highest mountain, the Schesaplana (2964m). Now I like the Totalp Hut: I like its creaking floors and its other-worldliness. I like the barren nature of its surrounds, the fabulous view along the frontier ridge and down to the greeny-blue Lünersee. And I like the ease with which you can climb the Schesaplana straight from the hut door. But I was weary next morning, and having climbed it in the past was content to leave the others to make their ascent, while I sat with Min at a table outside the hut, gazing at the view and gorging on apfelstrudel washed down with large cups of coffee. 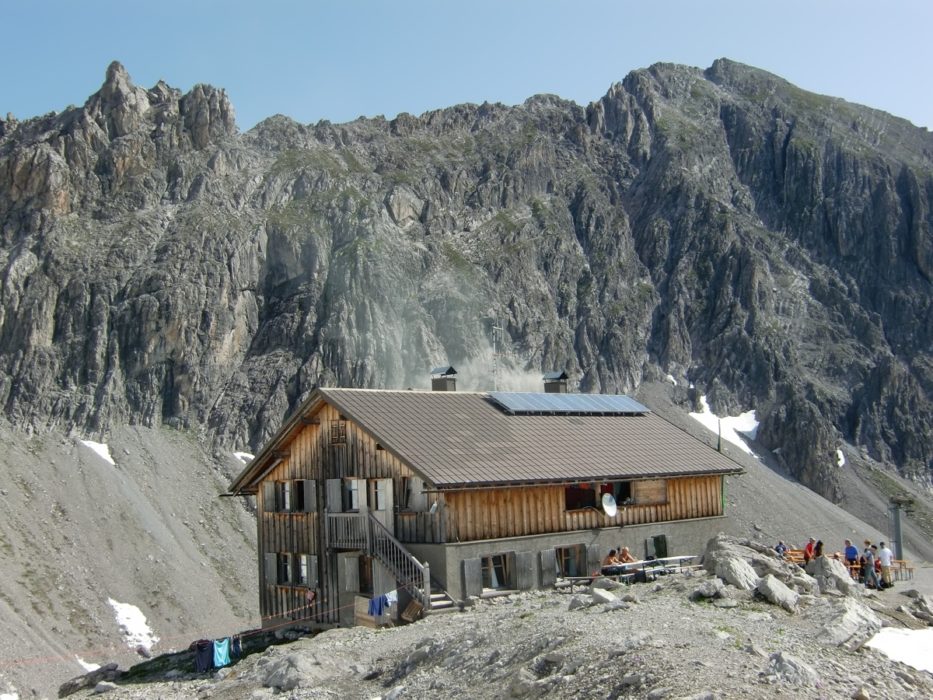 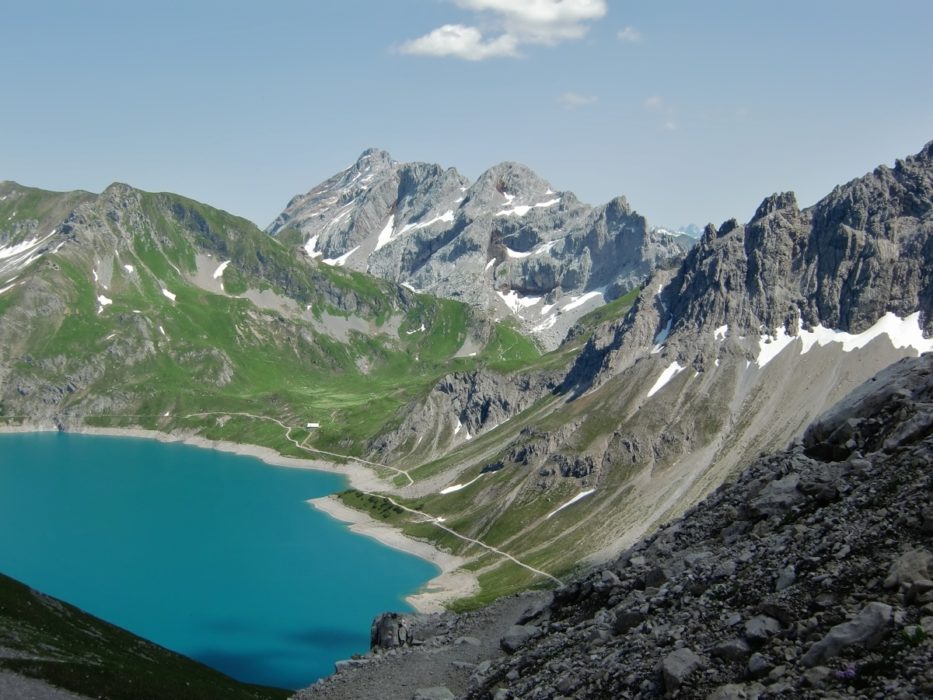 Leaving the Totalp Hut we crossed back into Switzerland via the tricky Gamsluggen, an airy ‘alpine route’ protected on the Swiss side by lengths of fixed chain. Knees were still twitching from the steep descent when we reached the comfort of grass, and there we wandered among vast clumps of alpenrose and juniper all the way to the Schesaplana Hut where, the following morning, we parted: John and Janette, and Jonathan and Lesley headed for Zürich and a flight home, while Min and I turned eastward to trek back to the Carschina Hut to spend another night among these sublime mountains.

Sometimes it’s hard to drag yourself away. 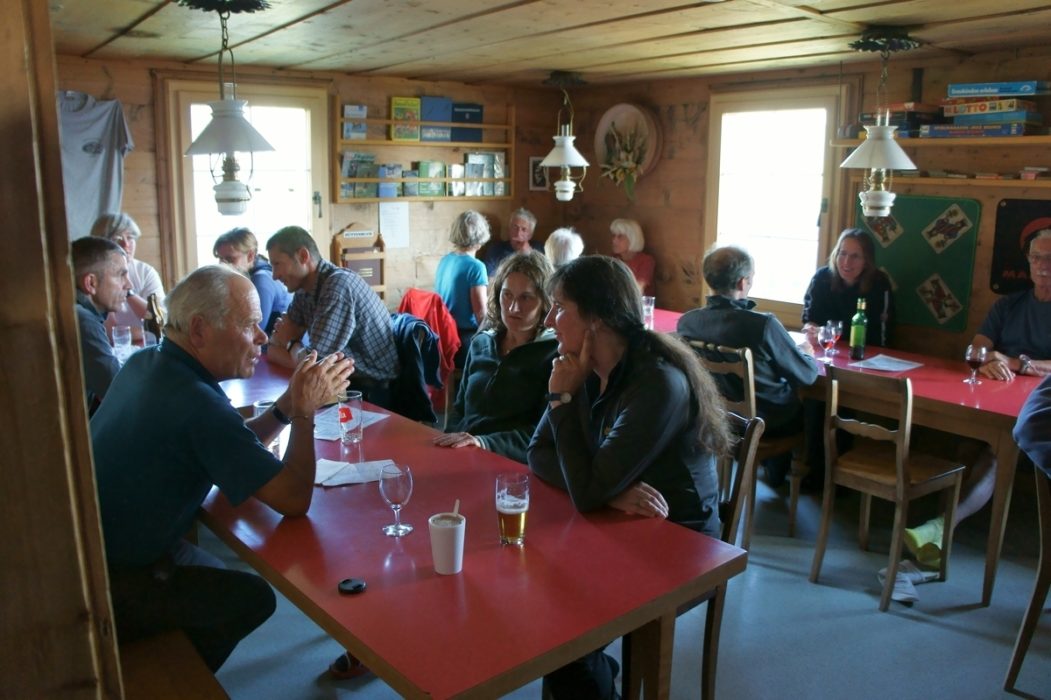 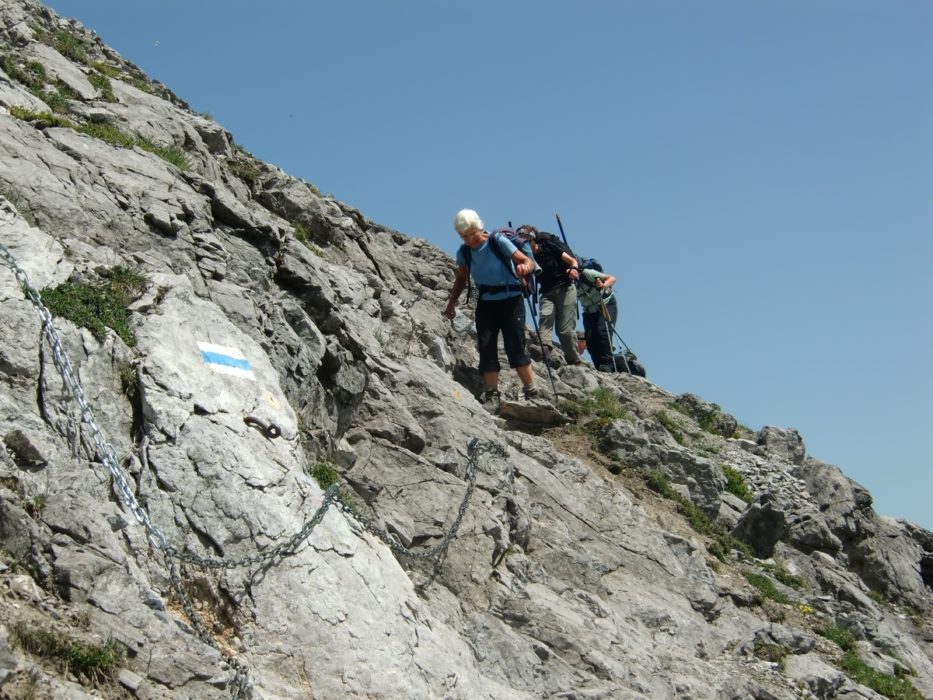 A comprehensive guide to walking and trekking throughout the Alps 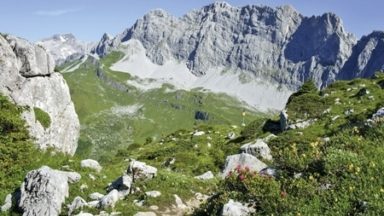 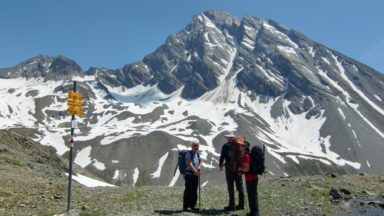 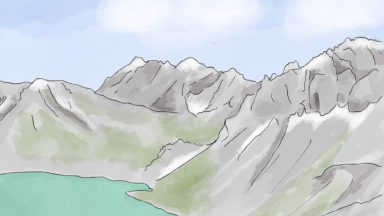 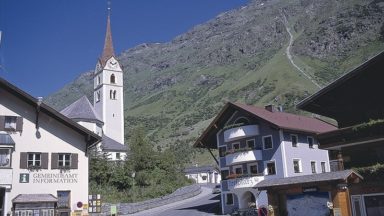 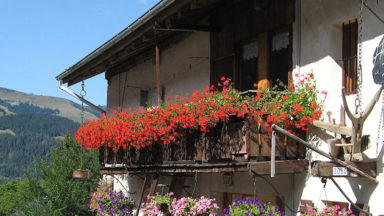 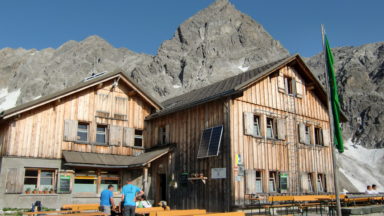