A short walking season with huts open from the third week of June to mid-September. Snow may persist into late June.

Routes are short treks of 2-8 days from easy to strenuous. Harder routes involve glacier travel and high passes and peaks, and snow early in the year.

The best hut-to-hut mountain walking in Norway. The land can be remote and wild, the refuges wonderful. Norway's highest mountain, Galdhøpiggen, at 2469m.

Overview
This book describes 20 walking and trekking routes in the main mountain areas of Norway, ranging from the Far South to the Arctic regions. Chosen because they are of particular interest to the visiting walker, all trips described are accessible by public transport. Many of the mountain areas are close to one another, making it easy to connect different routes for a fortnight's holiday. In Norway, you will find some of the most beautiful mountain landscape in the world. Unlike many of the alpine areas of Central Europe, these mountains are relatively free from crowds, and few roads criss-cross through this remote landscape. Providing an ideal setting for the walker, cairned routes twist through splendid scenery and link up with comfortable mountain lodges. You will meet a kind and proud people who will enthusiastically share with you there love for their mountains. Route descriptions, divided into daily segments, vary in length from a few days to over a week. Fact panels provide information on level of difficulty, base, maps etc. Introductory sections to each chapter detail unique information about each region and transport to the area. Summary tables, maps and route profiles illustrate the routes.
Table of Contents

The entire country of Norway has been mapped by Statens Kartverk. The M711 Norge 1:50 000 series, with red and white covers, are the most detailed. Some maps have not been updated since the early 1960s. Since this time, paths have been rerouted, bridges washed away and new bridges built, and roads added. For some of the routes you will have to purchase several of the M711 maps to cover the entire walk.

Additional maps with a scale of 1:100 000 are available for several areas: Rondane, Jotunheimen, Hardangervidda (West and East), Sylene, Trollheimen, Indre Troms (Troms Border Trail), Narvik - Abisko (Mountains of Narvik) and Snøhetta (Dovre Mountains). Many of these maps have been recently updated, although the scale is large. Often only one of these maps will be necessary for your walk.

If unable to buy maps before leaving home, allow time for this when you arrive in Norway. DNT offices (Den Norske Turistforening) (see Appendix D) carry both the M711 series and the 1:100 000 scale maps but are closed on weekends. Several bookstores in Oslo, Bergen and Trondheim that stock maps are listed in Appendix D. Most staffed huts carry local maps although supplies vary. You may find the 1:100 000 series at some larger railway stations and tourist offices.

This book provides maps of each walking tour. DNT and associated organizations publish free sketch maps of most of the walking areas in southern Norway. You will find both useful when planning your trip, but neither should be relied on when walking.

UPDATE NOTE: We have been advised that the code for one of the maps quoted in the book for Route 19 is incorrect. 1634 IV Rostadalen should read 1632 IV Rostadalen.

We have been advised that the code for one of the maps quoted in the book for Route 19 is incorrect.
1634 IV
Rostadalen should read 1632 IV Rostadalen.

Constance Roos was born in San Francisco, where she made her home and practised psychiatry. She received degrees from Stanford University and her MD from Case Western University. She was Assistant Clinical Professor of Psychiatry at the University of California San Fransisco. 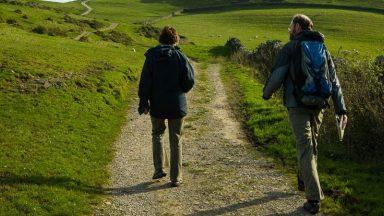