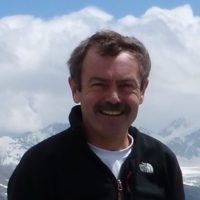 Mike Hawtree first came to Switzerland just over ten years ago, working for a well-known food company based in Vevey, on the shores of Lake Geneva. His wife, Jude, has worked in Evolène every summer since 2007, as a housekeeper and caterer for a mountaineering company. So it was only natural that when they got married they chose Evolène as a place to live. They bought Chalet Les Criquets and after some renovations, to both the chalet and apartment on the ground floor, they now provide accommodation. When not running the business, Mike walks and makes the most of the region he calls home.

Switzerland is an amazing country. You will have read, no doubt, about how the trains and PostBuses always run on time, and about its passion for cheese and chocolate. It is also rightly famous for its glorious lakes and mountains. With 48 peaks over 4000m, it’s a mountaineering paradise. But what about walking? Well, where there are larger peaks, there are many more, smaller ones just waiting to be conquered – and without the use of ice axes and crampons. And, as is often the case, you often get better views of the larger mountains from the smaller ones.

The canton of Valais, in the south of the country, includes the world-renowned tourist resorts of Zermatt and Verbier. Almost exactly halfway between these two over-crowded giants sits the more relaxed and far less visited Val d’Hérens. Mountaineers have been travelling here for years, with Arolla, at the valley’s head, close to some enticing 4000m summits. But the valley has much more to offer than that.

People describe it as ‘traditional’, but ‘authentic’ is more accurate, as life goes on in the valley pretty much as it has done for centuries. Away from big cities and ‘financial gnomes’, this is the real Switzerland, where dairy farming with the unique Val d’Hérens breed of cow is still key to the existence for many. The breed is known as a ‘fighting cow’, thanks to the way that they push and shove each other to assert their dominance, and in the spring special ‘Combat des Reines’ events are organised to sort out the queen and the general pecking order within the herd: the cows are then pitted against each other, literally head to head, until one concedes by walking away.

The impressive Grande Dixence dam – at 285m high is the tallest gravity dam in the world – can also be found here. Many smaller dams in the other valleys feed water into the lake via a network of tunnels through the mountains. It’s an important resource: over half the power used in Switzerland comes from hydroelectricity.

At the heart of the valley is the village of Evolène, which in 2012 was voted the most beautiful village in the French speaking part of Switzerland by the readers of L’Illustré. The centre is a jumble of ancient wooden chalets all huddled together along tiny passageways, where every stranger is greeted with a ‘bonjour’ from almost every passer-by: it’s a bit like going back in time. As well as a winter ‘Carnaval’, which runs for five weeks starting every January, there is an annual mid-summer festival on the 15th August, with a procession of the arts and crafts in traditional costumes.

The village is also well known to mountain bikers, as it’s on the route of the Grand Raid mountain bike marathon and the start of the Raid Evolènard – see below for more details.

Kev Reynolds must be credited with discovering the area, and has described 14 walks in the Cicerone guidebook Walking in the Valais. There are, however, further fabulous routes to be explored, six of which are outlined here: more precise instructions can be obtained from the author (see below).

6km and 450m ascent, or 13km and 600m ascent, depending upon the route taken after Lac d’Arbey. Best months to go: April–October

Although this lake is quite small it’s a popular destination for families, as there are several picnic tables, and children (and adults) love searching for newts, tadpoles and frogs. It also has wonderful views down the valley to the 4,000m peak of the Dent Blanche and the Ferpècle glacier.

Starting from Evolène village, the route briefly follows the road towards Lannaz and then climbs a path up through the woods. After quite a steep climb the path emerges to cross a meadow, which in spring and summer is awash with wild flowers. Just before you reach the lake there is a buvette, or café, which serves drinks and lunches during the summer months.

From the lake, the shortest route back goes out the far side and returns through the woods. However a slightly longer but more scenic path traverses along the west side of the valley, providing excellent views over the valley floor and the mountains beyond. About halfway along this path there is a choice of returning back down to Evolène, or continuing before dropping down to Les Haudères. Refreshments are available in Les Haudères and it’s an easy walk along the riverside, back to Evolène: or you can take the PostBus.

There are not many walks where you can reach a height of 2450m in a short space of time and then meander along, with magnificent views in all directions, to reach 2700m with relative ease. This has to be one of the finest walks in the Alps. The ridge is not precipitous in any way, though there is some short scrambling around Mont Loéré and Greppon Blanc.

Starting from the Thyon 2000 ski resort the path climbs quite steeply at first, but soon the resort is left behind and the awesome views begin. Just after the Etherolla ski lift there is a panoramic information board, giving the names around 50 of the visible peaks. This includes Mont Blanc, the Jungfrau and the Matterhorn.

It’s a fabulous walk which has just about everything, including two easy ‘get out’ options in case of tired legs. The walk can be shortened at both Mont Carré and Mont Rouge, where there are signposted paths which descend along good paths to two small lakes.

At Mont Loéré or Greppon Blanc you can either return the same way or drop down to the left and traverse along indistinct paths to the two lakes mentioned above. From there, the route goes back along a fairly level path towards Thyon, with views of the Pyramides de Euseigne way down below.

11.5km and 900m ascent. Best months to go: July and August (or June–October, if not taking the chairlift)

At just a fraction under 3000m this is a fabulous vantage point from which to view the Dixence Dam and the southern Alps. An added bonus is that, during the summer months, there is a chairlift which runs from Lannaz up to Chemeuille (at around 2100m) and saves 700m of ascent.

From the top of the chairlift the ascent is quite gradual, running past farm buildings and across a meadow, where Val d’Hérens cows graze during the summer, to reach a wooden cross at Pas d’Arpille (2436m). Here there are expansive views of the upper valley, and eagles and bearded vultures have been spotted soaring overhead.

The route continues around to the right, rising gently across flowery meadows and passing a small lake before the serious ascent begins. The steep climb to the Col and then along the ridge to the top is well worth the effort for its magnificent 360° views.

This is quite a challenging walk, but it provides superb views both en route and from the cabane (mountain hut). It also takes in a 3000m peak, the Pointe de la Tsevalire, which is adjacent to the cabane: the Becs de Bosson peak itself, at 3149m, is another possibility. Edelweiss, rarely found in the wild, may also be seen on the way between the Pas de Lona and the hut.

Starting from Evolène the path rises through woods and open fields to reach Volovron (1760m). A further climb through the forest, followed by a traverse along the alpage (pasture), reaches the small hamlet of La Vielle (2370m). From here, the path rises to the Pas de Lona (2787m), which incidentally is also the final climb for the Grand Raid mountain bike race! The route then goes off to the left to reach the cabane (2983m), where refreshments are available in the summer months and the views are breath-taking.

The return takes in the neighbouring peak of La Tsevalire, where there are extensive views into the uninhabited and ‘hidden’ Val de Rechy. One of the secrets of the Valais, this untamed natural valley is noted for its wide variety of flora, some of which is unique to the area. Chamois, deer, marmots and ibex can also be found there.

If you ever wanted to walk to over 11,000 feet (3350m), then this may be the walk for you: the appropriately named Mont de L’Etoile is a jewel in the crown of the Val d’Hérens. Make no mistake, it’s a strenuous hike, but it can be done in a day. Alternatively the Cabane Aiguilles Rouges (2810m) can be used as a resting place, before making that final push for the summit. A mountain guide, no stranger to 4000m peaks, once said that the nearby Pointe de Vouasson (3490m) had one of the finest views in the Alps: this one runs it pretty close!

Starting at La Gouille, the route follows the route to the popular Lac Bleu (which never disappoints, always living up to its name). The path continues, zig-zagging upwards over open terrain and passing just to the right of the Aiguilles Rouges hut. If required, refreshments and overnight accommodation are available here in the summer months. Alternatively carry on up to the right and follow the arête before turning right to attain the summit. Tantalisingly, there is quite a sharp ridge of only a few metres to reach the ‘real’ summit, but 360° views are there to be enjoyed. The return is the same way.

If you prefer to explore the area via a linear walk, with overnight stops in mountain huts or B&Bs, then the Tour de Val d’Hérens may be for you. Starting at Thyon, the Tour has 5 stages:

Note that stage 1 runs at a lower level to the Thyon Ridge described above, but the ridge can be incorporated before dropping down at Mont Rouge to meet up with the Tour path. Stage 2 could be split into two or combined with stage 3, with a stopover at the Dix Hut, followed by a walk across the glacier (without crampons) to the renowned Pas de Chèvres (where there are now new, and much safer, ladders).

Stage 3, if you take the direct route, is pretty much all downhill (to Les Haudères and Evolène). A more scenic though slightly more energetic alternative is to take the path up and via the Aiguilles Rouges Hut before descending to Lac Bleu, La Gouille and then descending (or taking the PostBus) to Les Haudères and beyond.

Stage 4 is exactly as described above if done from Evolène.

Mountain biking in the Val d’Hérens

Although there are no purpose built routes, the Val d’Hérens has many tracks and trails which are suitable for mountain biking, and the region hosts two well-known races, the Grand Raid and the Raid Evolènard, which either pass through or take place within the Val d’Hérens area.

30 varied walks throughout the valley between Chepstow and Plynlimon 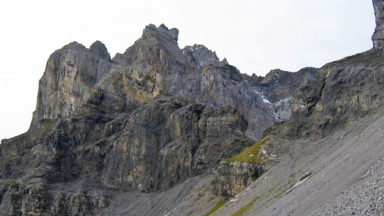 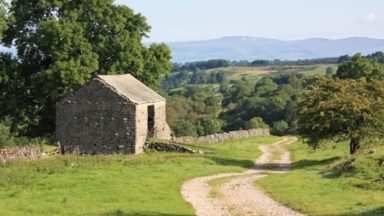