Some things, like stack-heeled shoes and perms, drop out of fashion and because everyone remembers how bad they were they never set out to rediscover them. Others things drop out fashion for no reason at all and really deserve to be enjoyed anew. In my opinion, Lôn Las Cymru falls into the second category. This long-distance cycle route in Wales should be on your list of rides to do. Let me explain why.

The route runs from Cardiff or Chepstow to Holyhead, passing through the heart of Wales. The distance from Cardiff is just over 250 miles (400km) or 237 miles (380km) from the alternative start in Chepstow. It passes through the Brecon Beacons and Snowdonia National Parks and over the Black Mountains and Cambrian Mountains of mid-Wales, taking in some of the most stunning and diverse landscapes in the British Isles.

In English its name means ‘Wales' green lane’, which is appropriate for three reasons.

First, it is the pre-eminent cycle route in Wales. Second, the route goes through some wonderfully green countryside and, third, when the route is not following former railway lines, it follows quiet lanes.

Travelling through such wonderful countryside by bike is hugely satisfying for both those who want to cover the miles quickly and those prefer a more leisurely pace to watch wildlife and explore attractions along the way. There are plenty of pretty villages and interesting towns where you can top up the energy levels in local cafés and interesting shops where you can replenish supplies. These towns also provide a good choice of overnight accommodation and places for dinner, although you may need to leave the route to find exactly what you’re looking for. Add to that an impressive collection of castles, industrial archaeology, churches, chapels and prehistoric sites along the route – and the red kites and common buzzards that are frequently soaring overhead – and you have a ride that you will remember for a very long time.

The cycle charity Sustrans designed the route to take in minor roads and avoid busy parts of towns and cities by using traffic-free paths along rivers and dismantled railways. From Cardiff, it follows the Taff Trail to Brecon, with the first 34 miles being entirely traffic free, before climbing the gap between the Brecon Beacons and the Black Mountains. The route from the alternative start at Chepstow is less urban, passing through the market towns of Usk and Abergavenny and over the magnificent Gospel Pass before dropping down to the literary town of Hay-on-Wye.

After coming together near Glasbury, the route follows the Wye Valley and then the upper reaches of the River Seven before two mountainous stretches – first through the Cambrian Mountains and then through the hills near Cader Idris. There is plenty of time to recover along the Mawddach Trail and the promenade at Barmouth before the route turns inland to climb across the hills above Harlech. After that, with most of the hard work done, it is pleasant riding through the tourist resorts along Tremadog Bay, before crossing the low-laying Lleyn Peninsula. There is more easy riding along Lôn Eifion and Lôn Las Menai to the Menai Bridge. Once on Anglesey, it is easy riding all the way to the end at Holyhead – with just a little extra effort if you prefer a more spectacular finish at South Stack lighthouse.

How the route came about

The route was officially opened in 1996. But in addition to the staff at Sustrans and the various county councils along the route who put it all together, we should posthumously thank Richard Beeching (1913–1985) for his unwitting help in the creation of Lôn Las Cymru. A brilliant physicist and engineer, who held senior positions in both industry and the civil service, in 1961 Beeching was appointed the first chairman of the newly created British Railways Board, commissioned with curtailing growing losses and returning the industry to profitability.

He recommended closing one-third of the country's 7000 railway stations and 5000 miles of track, resulting in the loss of 70,000 jobs. Unsurprisingly, such proposals were hugely controversial and many were rejected by the government, which terminated Beeching’s contract early, allowing him to return to industry. Protests resulted in some stations and lines being saved, but eventually the majority were closed as planned.

Over the years, some routes reopened, including a few in the Welsh Valleys. Other sections have been preserved as Heritage Railways or turned into roads. But some rural and urban lines have been absorbed into the National Cycle Network to give hundreds of miles of traffic-free cycling. Lôn Las Cymru includes the following stretches of shared-use paths, which follow the route of former railway lines – The Taff Trail (55 miles), The Mawddach Trail (9½ miles), Lôn Eifion (12½ miles) and Lôn Las Menai (4 miles). In total that is 81 miles of traffic-free cycling that became possible because of the ‘Beeching Axe’.

It’s not too demanding

Despite so much of the route being traffic free, it is not really a route for families. There are some mountainous sections in mid-Wales, such as the high-level sections from Llanidloes to Machynlleth and from Machynlleth to Dolgellau, and you might even find yourself riding above the fighter jets of the Royal Air Force and the US Air Force, which use the valleys of the ‘Mach Loop’ for low-level training. But for the most part, gradients are never severe and some, such as that up the Vale of Ewyas to the Gospel Pass, which is the highest road in Wales, are barely perceptible until very near the top.

Lôn Las Cymru can be ridden as a leisure activity or as a challenge and my new guidebook has flexible schedules for both types of rider for four to seven days. However, with the hammer down you could probably complete it in three days. Regardless of whether you start in Cardiff or Chepstow, the first sections are fairly easy, and once you get past Caernarfon it is predominantly flat with easy pedalling right across Anglesey. So, if you can spare some extra time, use it in the more mountainous sections in the middle of the route.

Many local cyclists will happily add an extra day or two to either end of their tour and make use of the National Cycle Network to get to the route and back. But others from further afield and those pressed for time will undoubtedly need another form of transport. Unless you are riding in a big group or on a tandem, the easiest way to access the route is by train as Cardiff, Chepstow and Holyhead are all on the national rail network. Similarly, there are a number of stations along the route so you can easily split the ride into sections.

Although you will need to make a bike reservation with the train operators that provide mainline services to Cardiff and Holyhead, services in rural Wales are provided by Arriva Wales. In my experience they are perhaps the most cycle-friendly train operator in the UK and I hope their successor maintains the same flexible approach after Arriva relinquish the franchise in 2019. Such an easygoing approach means anyone living in the North West, the Midlands, the South West, and perhaps even London can easily split the route over a couple of long weekends and pick and choose when they ride so as to enjoy the best of the weather.

Lôn Las Cymru is well signed throughout, with finger posts at major junctions and small blue repeater signs along the way. If you are starting from Cardiff it is National Cycle Network route 8 right through to the end in Holyhead. But if you are starting from Chepstow, it is NCN 42 initially until you meet NCN 8 just south of Glasbury. It can occasionally become confusing when signage for local routes such as The Taff Trail or Lôn Eifion take precedent, when another NCN route briefly follows the same course or signs are hidden behind undergrowth or temporarily misplaced. It pays to be attentive at junctions, checking both as you approach a junction and as you ride away from it to see if there is signage for riders going in the opposite direction.

Having the route downloaded onto a GPS so that you get a beep at every junction is reassuring but not a necessity. They have a nasty habit of losing satellite connection along the extensive tree-lined sections of the route and you may need to carry a power pack to top up the battery while riding.

It has lots of choices for accommodation

While some cycle tourists prefer to camp, days of repeatedly ascending 1000m or more with heavy luggage is unlikely to be pleasurable. My preference is to keep the bike light so I can enjoy the riding and the new guidebook makes maximum use of hostels and bunkhouses along or near the route. But if you prefer additional comforts you will find a variety of accommodation to suit most pockets on www.visitwales.com – the site of the Welsh Tourist Board. You may not be able to get exactly what you want at the start or finish of each of stage so may have to curtail your day before the end of a stage, ride further into the next stage or temporarily leave the route. But be aware that hostels are always busy during the summer months and those in the more popular locations can be full at weekends and sometimes even in the depths of winter, so it pays to book early.

It has lots to remember

While I cannot predict what you will remember, I can tell you what I recall nearly a year after riding the route. I remember the vibrant city of Cardiff, which was a new experience to me; riding past the cemetery at Aberfan; the view from the top of the Gospel Pass; cycling through the Cambrian Mountains with a red kite wheeling overhead; the eclectic shops and cafés in both Llanidloes and Machynlleth; riding through the Mach Loop with a couple of fighter jets below me in the valley; the anticipation of riding across the wooden viaduct at Barmouth; the relief at riding off the wooden viaduct at Barmouth; a truly excellent vegetarian café in Porthmadog and crossing the Menai Straits.

I also delight at the fact that the good folk at Sustrans could not agree the exact spots where Lôn Las Cymru begins and ends – we came to an agreement eventually, though. I also remember thinking that the location where the route ends in Holyhead – the tourist information office in the ferry terminal – was a bit of a disappointment. I rode three miles further to South Stack lighthouse instead and stared out at the sea for a while before returning to Holyhead to catch a train home. I encourage you to do exactly the same when you come to ride it. 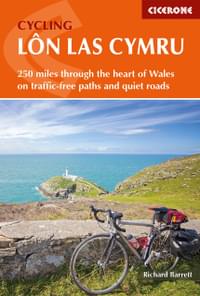 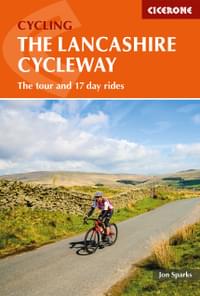 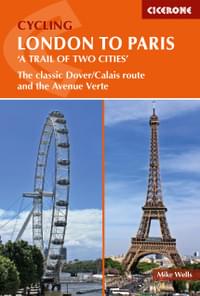 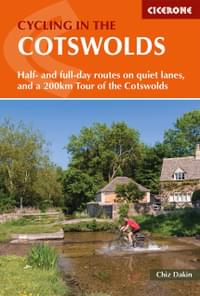 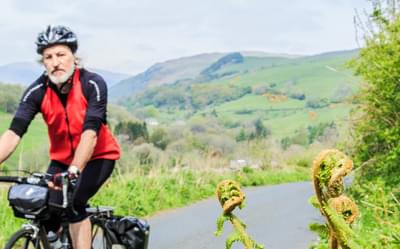 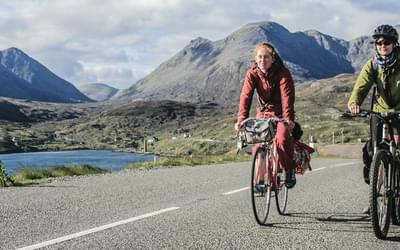 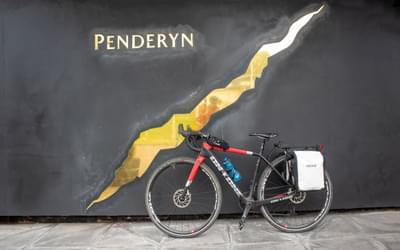 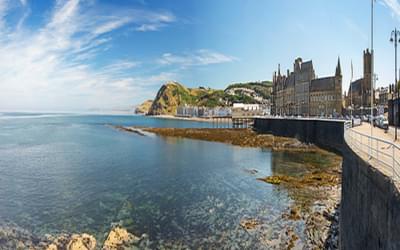